Thank You For Smoking Squanders Its Potential On Derivative Storytelling 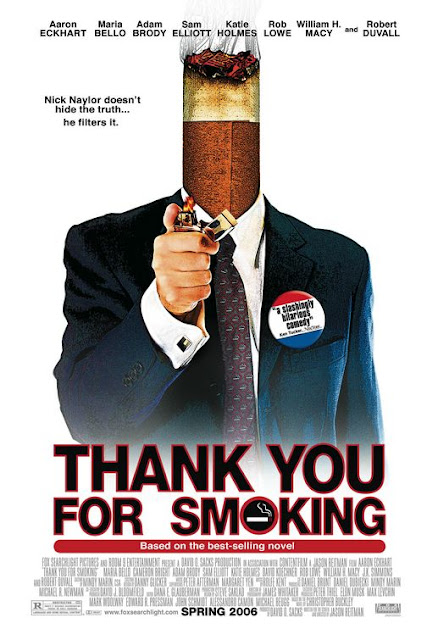 Juno was the movie that took director Jason Reitman to a whole new level of fame, but it wasn't his very first foray into the world of feature-length movies. After directing a large number of short films, Reitman made his inaugural foray into this type of directing with Thank You For Smoking, a political satire that establishes the kind of character-informed dark comedy that would be omnipresent in his subsequent works. Unfortunately, the kind of quality that would be found in Reitman's next three features is nowhere near as prominent in Thank You For Smoking, which is a more erratic and frequently frustrating type of Jason Reitman movie.

More than anything else, Thank You For Smoking strikes me as Jason Reitman doing a warm-up for his later movie Up In The Air. Both of these movies follow dudes who make a living in jobs that aren't looked on with high amounts of esteem and have personalities that make sure they're as emotionally detached from everyone around them as possible. But whereas Up In The Air was a captivating character study that constantly challenged and probed its protagonist, Thank You For Smoking makes the choice to have its lead character, Nick Naylor (Aaron Eckhart), be just a smarmy dude with no other real depth who ends up going down an all too traditional character arc.

Naylor is a lobbyist for a pro-cigarette company called the Academy of Tobacco Studies and he's really good at his job which consists of going to great lengths to making cigarettes as appealing to the public as possible. Thank You For Smoking follows Naylor as he tries to help sell an initiative to boost cigarette sales by getting them used by main characters in high-profile American movies as well as him trying to keep on good terms with his young son. Both of these tasks he decides to approach by being his usual smooth-talking self, which consists of him tying so many verbal knots around those he interacts with that they have no choice but to follow his orders or do what he says.

This is a potentially interesting character that Thank You For Smoking doesn't seem to know what to do with, which is a shame because Aaron Eckhart actually sells the character's demeanor extremely well. The best uses of Nick Naylor as a fictional individual are where the film settles for using him as a vessel for dark comedy, otherwise he's just not all that interesting to follow around for a couple hour. This is especially notable when the story makes the bizarre decision to have him hit rock bottom once act three starts and the audience is supposed to root for him to get back out there and redeem himself. What on Earth has Nick Naylor done as a character in the last 90 minutes to make me invested in him scoring a comeback?

Even before that poorly done plot turn though, Naylor's adventures still don't grab one's attention like they should. A visit out to Hollywood, despite the presence of a game Rob Lowe as a talent agent, just inspires some hackneyed jokes about the quirkiness of Los Angeles residents while the time we seem him spend with his son, a character who really has no personality unto his own, is similarly devoid of innovation, their scenes together feel like they could come from any other typical movie that involves a divorced dad connecting with his son, complete with the precocious youngster offering sage advice that's wise beyond his years for his pop when the chips are down.

Thankfully, some all too rare attempts at dark humor work far better than the father/son angle of the story, with some of the best dark comedy emerging from William H. Macy as a villainous Democratic Senator looking to put gruesome warning labels on cigarette boxes. Few can play seemingly well composed but actually petulant middle-aged dudes as well as William H. Macy, he's always such fun in these roles and he seems to relish dishing out the cruelest pieces of dialogue imaginable. Those kind of outright successful executions of dark humor are tragically scant in Thank You For Smoking, which ends up taking a potentially interesting lead character and story and wasting it on a more traditional narrative too obsessed with tired jokes and dull subplots. Oh well, at least Jason Reitman's spiritual successor to this film, Up In The Air, was terrific.
Posted by Douglas Laman (NerdInTheBasement) at 2:40 PM