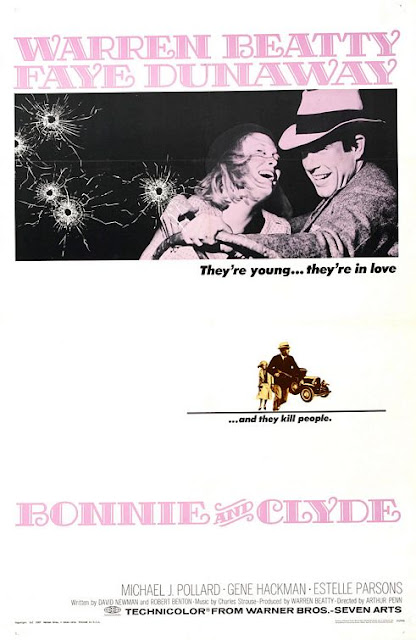 Before they were known as being the presenters caught up in the middle of a massive Best Picture Oscar snafu, Warren Beatty and Faye Dunaway's most notable collaboration in American pop culture was in their portrayal of real-life criminals Bonnie & Clyde in the 1967 motion picture of the same name. Directed by Arthur Penn, the film is not interested in chronicling who Bonnie Parker (Faye Dunaway) and Clyde Barrow (Warren Beatty) were prior to their criminal escapades, the feature begins with the two meeting outside of Bonnie's house with Clyde managing to coerce Bonnie to join him in his assorted robberies while trying to impress here.  Conversely, its story comes to an intentionally sudden halt once the duo meet their grisly end, solidifying this as a movie squarely focused on just the romance that blossomed between these two legendary criminals.


It's a retelling of a real-life romance that caught on like wildfire in its initial theatrical release as it tied into the "Fight The Power!" mantra of young people in the 1960's who identified with the lead characters who went through great lengths to steal from powerful corporations and not down on their luck people (this is especially highlighted in a scene where the two leads bond with a friendly farmer whose house was just foreclosed on by a powerful bank), a refusal to be tied down to one home and a depiction of older characters being untrustworthy at best. Though audiences found personal catharsis in the feature, Bonnie and Clyde as a movie doesn't really think of its lead characters as akin to Robin Hood, but it does empathize with their personal plight that led them to becoming criminals in the first place. It's a prime example of a film humanizing people who commit unsavory acts while refraining from endorsing such acts.

It was interesting to discover that young moviegoers back in '67 rallied around the world of Bonnie and Clyde though if only because the script by David Newman and Robert Benton goes to great lengths to emphasize how rough it was for its lead characters to live out on the lam for so long. Though Bonnie and Clyde are typically looked at in a romantic light, something this movies original reputation heavily contributed to, the lives of these two crooks as seen here is anything but glamorous. Seedy crowded hotel rooms are typically the best living conditions Bonnie and Clyde find themselves in whilst on the run and choosing to depict the two's life as criminals in this manner proves to be one of the most fascinating storytelling turns of the feature, especially since it frames the two leads reasoning for constantly resorting to criminal activity as them constantly chasing after a dream of life and luxury that they never had.

Choosing to depict Bonnie and Clyde's life as world-famous crooks as a realistically troubled existence offers so many opportunities for that kind of character exploration which is further enhanced by the performances of Warren Beatty and Faye Dunaway. Both actors make the intriguing choice to depict their characters as being, on the surface, just regular old confident Southerners with a skip in their step that masks internal vulnerability, with both sides of Bonnie and Clyde being fully realized in the performances by Beatty and Dunaway, who also manage to have sparkling chemistry that sells the idea of these two being a believable romantic couple right from their very first scene together.

Speaking of good actors, it filled me with utter delight to discover, while the opening credits played, that Gene Hackman was in this feature playing Clyde's brother, Buck Barrow. Apparently, this was the role that put him on the map as an actor and it's not hard to see why since he's a riot here portraying a run-of-the-mill guy who just seems to casually fall into accompanying Bonnie and Clyde on their various criminal exploits. Similarly showing up to my complete surprise here is Gene Wilder, who manages to score a number of laughs in his limited but oh so entertaining screentime as a man whose car is stolen by Bonnie and Clyde and then becomes enamored by the duo and their criminal pals.

Gene Wilder's character just can't resist the everyday charm of these criminals who act like the idyllic image of hospitable Southern folks instead of gun-toting banks robbers. No wonder he and audiences across the globe fell in love with Bonnie and Clyde so much, the movie does a great job of humanizing these two by framing their bank robbing in a realistic light. Two criminal figures who had already back in 1967 been the stuff of legends for eons are here depicted as human beings, like you or me, existing in a world that disproportionately benefits the rich and the powerful. With Bonnie and Clyde, director Arthur Penn crafted a terrific movie that managed the neat trick of simultaneously speaking specifically to the zeitgeist of 1967 while also carrying numerous timeless qualities such as rich performances.
Posted by Douglas Laman (NerdInTheBasement) at 1:10 PM