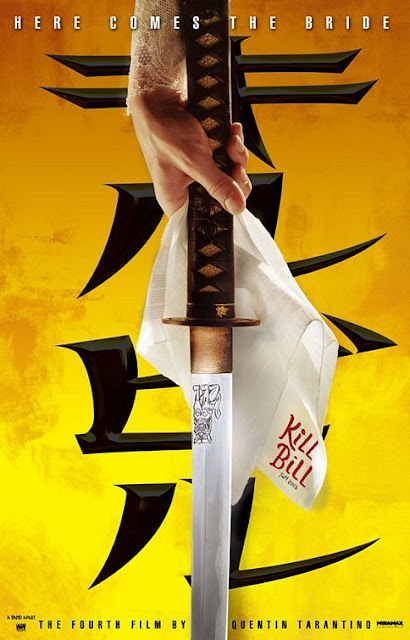 In retrospect, it's nuts that Quentin Tarantino had a whopping six years separating the release of his third film, Jackie Brown, and his fourth film, Kill Bill (which was split into two individual movies upon its initial release). In every part of his career, Tarantino has only taken three or four years maximum in between projects, but then again, he hasn't really done anything as large in scale as the expansive Kill Bill saga in the rest of his filmography, perhaps that extensive break between films was necessary for him to properly prepare for a motion picture of this magnitude. Whether that's true or not, that extensive wait was totally worth it as Kill Bill is a terrific feature that gathers up depth as it goes along like a snowball picking up snow as it travels down a snow-covered mountainside.


For full disclosure, I'm not at all familiar with, let alone a die-hard fan of, the martial arts movies that Tarantino is paying homage to here, among other genres, including Westerns (which I am more familiar with). But one doesn't need to have seen every single Cynthia Rothrock vehicle to appreciate Kill Bill. The story itself, concerning a woman known as The Bride (Uma Thurman) waking up four years after being left for dead and going on a grisly mission of vengeance, functions as a singular experience in its own right that just so happens to have extra layers of subtly incorporated homages for those in the know to pick out. Kill Bill is a film that works like gangbusters for martial arts movie novices and connoisseurs alike.

The plot, like earlier Tarantino effort Pulp Fiction, is told in a non-linear fashion that takes the audience through not only The Bride's mission for bloody revenge but also her early days in training as well as establishing backstories for a select few supporting characters. All of the supporting characters who receive elaborate backstories, like O-Ren Ishii (Lucy Liu) and her primary bodyguards, are female whereas male supporting characters like Bill (David Carradine) receive minimal information on their past, an interesting method of storytelling likely meant to rectify how typical genre B-movies of the past left female characters with little personality beyond "Girlfriend", "Lady of the Night", etc.

The non-linear method of storytelling also has the benefit of getting the viewer more and more invested in The Bride's quest for vengeance as the story goes on as more and more information on who she is doled out to audiences as the story goes on. Much of that characterization comes in the second half of the story contained within Kill Bill Volume Two, with the first half of this tale being devoted primarily to an assortment of action sequences meant to emphasize what an excellent fighter our lead character is as well as allow Quentin Tarantino to indulge in an elaborate fight sequence for the first time in his career as a filmmaker.  It's an impressively staged set piece for sure that also manages to squeeze in some humorous dark jokes.

While the various combat sequences of the first half of Kill Bill are very well-made, I would say that I prefer the second half of this epic tale more than the first. While Kill Bill Volume One is an entertaining thrill ride, it's successor manages to concoct dialogue exchanges more enthralling than the climactic Japan-set showdown of the first movie. The characters truly come to life in the sequel, particularly Bill, whose smartly drawn as explicitly the villain not by being a cartoonish antagonist but rather by being a very realistic depiction of an abusive lover who sees's women as merely property that he feels entitled to own. Simply by channeling tiny bits of recognizable real-life abusive behavior, Carradine manages to become an intimidating foe for The Bride to face off with.

The second half of the Kill Bill tale also manages to make great use of the non-linear format of storytelling as sequences depicting The Bride being trapped by an assassin played by Michael Madsen are intercut with flashbacks showing the brutal training The Bride underwent to become the skilled fighter she is today. It's an absolutely brilliant use of the storytelling structure of the film that culminates in one of the movies most cathartic moments, which is only rivaled in effectiveness by how The Bride ends up dispatching a one-eyed assassin just a few scenes later.  Simply put, Kill Bill Volume Two is flat-out amazing and even manages to end the whole heavily violent affair on a note of sweetness! Who would have thought that was possible?

It feels off-putting to praise Quentin Tarantino's work behind the camera here due to his on-set behavior towards Uma Thurman that resulted in a long-term injury for the actor (similarly, the mention of both Harvey and Bob Weinstein in the opening credits kicks things off on a sour note). Thus, I'll be closing out this review with more than deserved extended praise for Uma Thurman and her crucial role here. If her performance didn't work, nobody would want to follow The Bride around on her extended mission of vengeance. But Uma Thurman is fantastic in the role and is easily believable as a force to be reckoned with in the action sequences while also bringing some humanity to her characters more vulnerable moments. She's the glue that holds this massive in scope and massive in entertainment Kill Bill endeavor together, no question about it.
Posted by Douglas Laman (NerdInTheBasement) at 1:21 PM