Solo: A Star Wars Story Is Better Than You'd Expect A Han Solo Origin Movie To Be But Still Suffers From A Derivative Nature 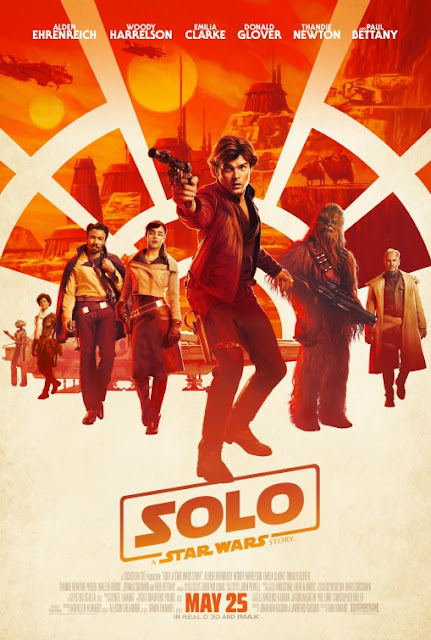 Ever since Harrison Ford shot his blaster through a mosquito alien in a seedy extra-terrestrial tavern in 1977, people have loved Han Solo. Why wouldn't we? He's got bad boy charm, he's got Harrison Ford's immense charm and he gets to serve as a grounded point-of-view in the original Star Wars as a guy who just doesn't care about all of this alien mumbo-jumbo in this universe. Even as a guy who thinks Han Solo is cooler than a morning on Hoth, do we really need a whole movie detailing the man's background? The fact that he carried an aura of mystery was always a big part of Han Solo's charm after all. Well, Disney marketers, er, master storytellers have seen fit to give us a Han Solo movie in the form of Solo: A Star Wars Story, the second stand-alone Star Wars Story following 2016's Rogue One.


Like Rogue One, Solo compresses a lot of time and big events in its lead characters life in the span of an opening sequence. We get to see Han Solo trying his hardest to get off a scummy backwater planet with his love interest Qi'ra (Emilia Clarke), then we get to see tragedy strike the duo just before Han enlists in the Imperial Academy, an enlistment that allows the audience to get a prolonged explanation for Han Solo's last name. Once we flash forward three years later and see Han Solo meeting scoundrel Tobias Beckett (Woody Harrelson), the story begins to get underway proper as Solo, along with newfound companion Chewbacca (Joonas Suotamo) wishes to join Beckett and his crew in their missions.

It is here that Han Solo uses his skills as a pilot to really get into the world of shady thievery, an adventure that manages to reunite him with Qi'ra and also cross paths with another scoundrel by the name of Lando Calrissian (Donald Glover). It's a story that's at its best when it's doing things unique to the Star Wars movies, most noticeably, it's commendable how screenwriters Jonathan Kasdan and Lawrence Kasdan keep the scale of the story small, much smaller than any prior Star Wars movie save for maybe Empire Strikes Back. I kept expecting some sort of new revelation to come up revealing that the circumstances of this story were tied into a larger plot involving the fate of the entire Galaxy or a proto-Death Star, but no, it's all just coming down to pulling off a mission for a shady gangster.

There's also, interestingly, no single big villain for the proceedings, no Kylo Ren, no Darth Vader, no Orson Krennic to be a looming on-screen presence for the protagonists and audience to fear. Dryden Vos (Paul Bettany) comes closest to serving this function but he's mostly off-screen for the proceedings. Instead, the world of Solo: A Star Wars Story takes place in assorted wretched hives of scum and villainy, so every other person Han Solo is basically a villain to one degree or another. In other words, one larger foe is traded for more morally grey smaller baddies, a storytelling decision I'm not sure works entirely well, but at least shows a willingness to try different things, which is where Solo: A Star Wars Story excels at.

Most of the time, when Solo is just having a ball doing its own thing, it's actually a lot of fun, most noticeably in a well-filmed and well-edited card game duel between Han and Lando that's highly thrilling. Some unique set pieces centered around a mining colony and a nicely done small-scale climax involving shifting allegiances are similarly thrilling, particularly the former sequence. The very chaotic production of this project makes it difficult to tell whose responsible for what big set pieces, but the second unit team (led by second unit direct Bradley James Allan) and the editing department deserve special kudos for making the spectacle of Solo, which include a space train heist, thrilling entities. On the topic of new elements, newbie character L3, played by Phoebe Waller-Bridge, meanwhile, is a whole new take on droids that proves to be the best character in the whole film, I could watch an entire trilogy just based around her.

Unfortunately, the majority of the other new characters aren't all that engaging, with femme fatale Qi'ra not really working as her own individual character despite a game performance from Emilia Clarke and the unimaginatively designed Dryden Vos being one of the more forgettable foes in the Star Wars mythos. These guys at least fare better than characters played by Thandie Newton and Jon Favreau who end up being underutilized in infuriatingly brief roles. The fact that a large share of the supporting characters of Solo fail to crackle is what really weighs down the otherwise enjoyable affair for me, the Star Wars universe is known for having background characters with no dialogue who leap off the screen but here too many key supporting characters just end up fading into the background.

Thankfully though, they've actually nailed it out of the park with the lead casting of Alden Ehrenreich, whose actually pretty fantastic as Han Solo. Something both Ehrenreich and the script get about Han Solo right away is that this guy is not really a 110% bad-ass, in the original Star Wars, he's a guy with believable swagger but he's also a klutz more often than not. Ehrenreich maintains that underappreciated core value of Han Solo beautifully here while also providing oodles of charisma in his performance and maintaining some solid chemistry with Joonas Suotamo as Chewbacca. Similarly, Donald Glover is just so much fun taking over the role as Lando Calrissian, a guy whose understandably self-absorbed with his magnificent cape-wearing self.

Those two are probably the best examples of Solo: A Star Wars Story engaging with other elements of the mythology of this franchise since the weakest moments of Solo come in the form of ham-fisted dialogue references to already existing Star Wars elements. They're not running rampant or anything, but they do tend to hamper the scenes they occupy and one late-in-the-game cameo from an existing Star Wars character that draws more confusion than glee is a key example of this. The end result is that Solo is a movie held back how derivative it is of past Star Wars movies while also excelling when it's exploring new places to take this forty-one-year-old franchise. Even with this tug-of-war going on between the old and the new going on, director Ron Howard, in a major step up in quality from The Dilemma, does deliver some exciting fun that never thrills or lifts your spirits like the last three Star Wars movies did, but is pretty good if overly formulaic summertime fun in its own right. Really, that's better than I ever thought a Han Solo origin movie could ever be, so Solo: A Star Wars Story gets a clear win in that regard.

And now, what better way to end this review than this magnificent song...

Posted by Douglas Laman (NerdInTheBasement) at 11:24 AM