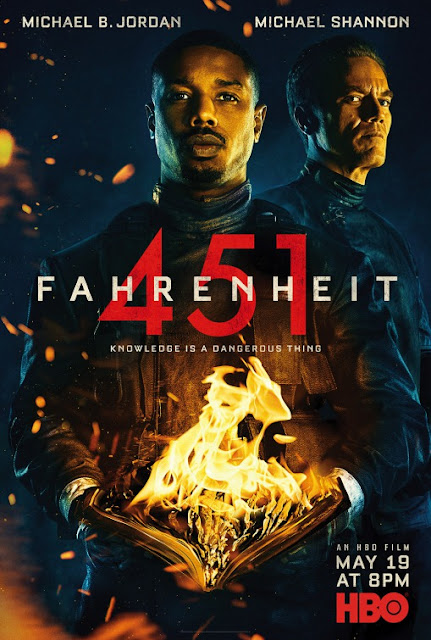 Ray Bradbury's 1953 novel Fahrenheit 451 has received a pop culture resurgence in recent years thanks to its relevance to modern-day political issue, making it an inevitability that someone would try and take another swing at giving the novel a feature film adaptation (Francois Truffaut was the last person to tackle this material in a 1966 motion picture). Taking on this material now is Ramin Bahrani, director of one of 2015's most underappreciated titles 99 Homes, who writes and directs the film which stars Michael B. Jordan and Michael Shannon. Now that's a dynamite assemblage of creative artists! What a shame, then, that this new take on Fahrenheit 451 is more middling than captivating.

Like the novel in which it was based, Fahrenheit 451 takes place in the near future where books are considered illegal and the job of firefighters now entails tracking down and burning any books they can find for the good of the world at large. That's what firefighter Guy Montag (Michael B. Jordan) has been told all his life and followed dutifully, but now he's starting to generate some doubts about his profession which are exacerbated by him actually reading a book.  Developing an abruptly introduced romance with a woman, Clarisse McClellan (Sofia Boutella), determined to fight back against the oppressive government further fuels Montag's suspicions about the world around him.

Fahrenheit 451 belongs to that class of mediocre movies that is done in primarily by its writing. Not everything else in the movie is perfect, Lord knows, but if the script had been more up to snuff, the pervasive contemplative tendencies of the project would be more engaging and that would go a long way to helping Fahrenheit 451 out. Clearly, this film wants to be as thought-provoking and relevant for the modern-day political era as Ray Bradbury's text was in subtly responding to 1950's political issues like the Red Scare. But notice the word "subtly" there, that's something Fahrenheit 451 struggles mightily with in regards to how it depicts its characters and the story they get wrapped up in. Good characters and bad characters are drawn in such broad strokes as to make the idea of moral complexity nonexistent while the plot itself feels inspired not by philosophical musings but rather by cribbing from a whole slew of recent science-fiction films without adding in their own perspective to balance things out.

The dialogue, especially, suffers from being heavily ham-fisted, with poor Michael Shannon especially getting stuck with a horde of repetitive dialogue that fails to make his character menacing while Martin Donovan is stuck on a hologram screen spouting expository lines that could have come from any generic science-fiction thriller. Meanwhile, a number of clunky plot points, most notably an awkwardly rushed romance between Clarisse McClellan and Guy Montag, further undercut the intellectual aspirations of this motion picture. Writers Ramin Bahrani and Amir Naderi keep getting in the way of Fahrenheit 451 from matching the intellectual qualities of its source material or even just creating its own unique explorations of certain relevant themes.

Similarly underwhelming is the production design, which has Guy Montag inhabiting a gloomy dystopian city filled with skyscrapers draped in holograms that hews too closely in design to Blade Runner and even the third Maze Runner movie of all things, further robbing Fahrenheit 451 a chance to establish its own identity. The actors, at least, are doing solid work, even if it frequently feels like Michael B. Jordan and Michael Shannon, who both do decent work here overall, are just doing a Greatest Hits compilation of prior acclaimed performances. Interesting to see Sofia Boutella perform and do well in a more muted role compared to her performances in a number of recent blockbusters, a nice subtly demonstration of versatility from this highly promising actor.

But even good work from the likes of Sofia Boutella and Michael B. Jordan can only do so much for Fahrenheit 451, especially when the movie closes on a predictable climax hinging on a ticking clock involving a bird and a secret compound. It's a lazily shot and edited finale tragically devoid of characterization, a dull end to an underwhelming project that wastes the potential inherent in its source material and in the idea of radically overhauling said source material. Great things can come from heavily reinterpreting existing pieces of text when translating said text into a new medium of storytelling, though doing that can also result in tedious derivative cinema as this new version of Fahrenheit 451 clearly demonstrates.
Posted by Douglas Laman (NerdInTheBasement) at 10:36 AM