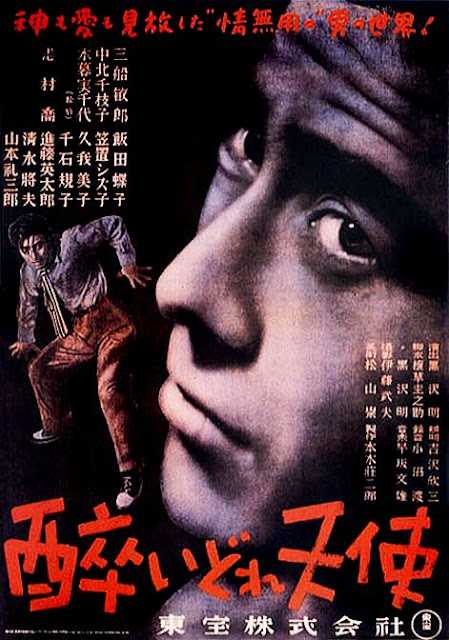 SPOILERS FOR DRUNKEN ANGEL ARE AHEAD!!!

By the time Akira Kurosawa's 1948 film Drunken Angel begins, World War II has concluded, but the actions of said war are constantly being felt by so much of the population of Japan, who are just trying to adjust to some form of conventional reality. One person looking to just get by is Sanada (Takashi Shimura), a doctor who finds solace in helping patients and even more solace in consuming copious amounts of alcohol. Typically against his own better judgment, Sanada can't give up on any patient in need and that includes local ruffian Matsunaga (Toshiro Mifune), a young man who Sanada discovers has tuberculous, a condition that can only be cured if Matsunaga slows down his life.


Such a proposition does not sit well with Matsunaga who greets Sanada with hostility and outright violence at the start of their relationship. There's always some element of distrust in the way these two interact throughout the entire movie, typical story elements that crop up in other odd couple stories, namely each member of the duo helping the other to overcome some sort of personal character defect, are not to be found here. Instead, this is a grim tale that uses the dynamic between Sanada and Matsunaga to explore the struggles gripping many in post-WWII Japan in the late 1940's as well as how living in this specific era of Japan affects individual people differently.

As said at the outset of this review, World War II has come to a close before Drunken Angel begins and there are no flashbacks to be found to events during that war in this story, even references to specific events or people associated with World War II are kept to a minimum. Drunken Angel is concerned with the here and now (or at least, here and now circa. 1948) and that allows it focus less on large-scale events from WWII that influenced the atmosphere of the country in this era and instead focus more on various small-scale plights of its characters who are reacting to having to live in said atmosphere on a constant basis. Such plights work well as thoughtful examinations of this specific part of Japan's history as well as just gripping storytelling on its own merits.

The lead character of Drunken Angel who epitomizes the richly complex nature of the entire film is Sanada, a man who simultaneously tries to help cure people of their ailments while gorging on booze that harms his own body. Sanada struck me as a thoroughly fascinating character, a realistically imperfect person, a guy whose complicated nature is fascinatingly rendered in both the screenwriting by Akira Kurosawa and Keinosuke Uegusa and especially in the performance by actor Takashi Shimura, a man who gracefully mixes together woe and determination in his portrayal of Sanada. Playing opposite Shimura for much of the movie is Toshiro Mifune in his first ever performance in an Akira Kurosawa movie. Yes, Drunken Angel is the movie that kicked off one of the all-time great actor/director combo's and it's a fantastic start to the duo's long list of collaborations.

In one of his first acting jobs, Toshiro Mifune already possesses a gift for deftly combining heightened acting elements (like any time he tussles with Takashi Shimura) with tiny details that make Matsunaga come to life as a young tortured fellow. Like Sanada, Matsunaga is realized as an intricate person with layers, a guy who seems like a just a thoughtless brawler but ends up showing some real depth as the story goes on, to the point that he even insists on going out and slaughtering his former superior who is now threatening Sanada's wife, a mission Sanada forbids from doing. Considering the ruly nature of many of Mifune's characters in Kurosawa's films like Matsunaga, you can imagine Sanada's wishes are not followed.

Just as the lead duo of Drunken Angel do not have tidy character arcs typically associated with movies starring mismatched duo's, so too does Matsunaga's quest for vengeance not result in quick and simply catharsis. Instead, it just results in bloodshed that ends up killing Matsunaga in the process, his hope for quick vengeance has now resulted in his own demise. It's an absorbing conclusion to his journey as a character mired in tragedy, this man could just never tame his own boisterously violent nature. Sanada, like the viewer, experiences grief once Matsunaga is killed, as the process of seeing Matsunaga die because of troublesome personality traits he had been trying to help this patient escape from has left Sanada hopeless and defeated.

Are men just doomed to die because of their worst faults? Is there any hope out there? Kurosawa dangles these existential questions in front of both Sanada and the viewer in Drunken Angel's quietly harrowing final scene, one that immerses the viewer in a bleak outlook on the world...and then someone walks up to talk to Sanada. It's a young female patient he had diagnosed with tuberculosis earlier on in the movie who has come to tell him she's cured and is fully embracing the future ahead of her. Hope has arrived in the form of this young girl and Sanada is a key reason why she's even around to be this embodiment of hope. Sanada won't be able to save everyone, but no matter how bleak things get, he can't give up trying. Like the fantastic movie Drunken Angel that he stars in, Sanada realizes how much darkness there is in this world while also realizing how important it is to fight for hope in that very same world.
Posted by Douglas Laman (NerdInTheBasement) at 11:47 AM