With A Disappointing Memorial Day Box Office Debut, Solo: A Star Wars Story Isn't Feeling Like A Star Whose Shine Can't Be Stopped 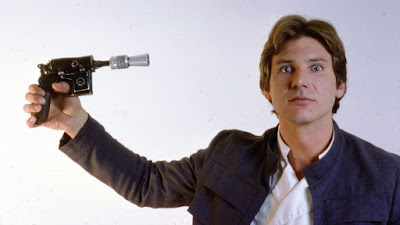 Note: All box office figures discussed in this article are three-day weekend figures.

Well, pull up a chair folks, because we've got a box office debacle to dissect. And not just any box office debacle, no, this is the kind of surprise box office misfire that us box office geeks will be talking about for eons to come. Such a box office performance came in the form of Solo: A Star Wars Story, a feature everyone knew would be the lowest-grossing of the new Star Wars films, but did anyone even imagine it would go this low at the domestic box office? Solo grossed only $83.3 million this past three-day weekend, 46% below the opening weekend of Rogue One and about 62% below the opening weekend of The Last Jedi from just five months ago. It's also only 4% ahead of the opening weekend of Attack of The Clones from 2002 and that's without taking inflation into account. Taking inflation into account, however, Solo is revealed to be the first Star Wars movie since Return of The Jedi in 1983 to sell less than $100 million worth of tickets over its opening weekend. While I'll be refraining from talking about four-day holiday weekend projections in this article, Disney is also saying Solo will barely get over the $100 million mark by Monday with a $101 million four-day haul. And just a few days ago it was thought of as a certainty that this would dethrone Pirates of The Caribbean: At World's End's $139.8 million four-day gross for the biggest Memorial Day weekend haul in history.

On a $250+ million budget, Solo: A Star Wars Story is looking like an outright box office misfire, especially since it's mere $65 million foreign box office opening weekend gross this weekend indicates it can't turn to overseas box office for help like many past blockbusters that failed to get going at the domestic box office. This is the sort of box office dud that mega-franchises like Star Wars are supposed to be inherently unable to create, but that's just what happened here as numerous factors collided to take down this Han Solo prequel tale. First off, Disney has gotta give up trying to squeeze in a blockbuster over the Memorial Day weekend frame. I know this studio has a creepy obsession with owning every one of the 52 weekends of the year it can get its hands on, but trying to get another big-budget movie released in between their early May Marvel movie and their mid-June PIXAR movie just keeps coming up short. Tomorrowland, Alice Through The Looking Glass, that fifth Pirates of the Caribbean movie, Disney can just never get these movies marketed properly, they end up feeling like afterthoughts in the summertime marketplace. The only recent late May Disney movie that managed to soar at the domestic box office was Maleficent and notice how that one was released in the most recent summer where Disney had neither an early May Marvel movie nor a mid-June PIXAR movie to eat attention, giving Maleficent a chance to stand out, something Solo was always gonna struggle to have due to its May 25 release date.

That release date put Solo right after Avengers: Infinity War and only one week after Deadpool 2, there was no room to breathe for the title and even a smuggler whose used to defying the odds like Han Solo can't beat out such an overwhelmingly competitive marketplace. The more expansive Christmastime marketplace that the last three Star Wars movies were released in has been traded out for the summertime frame Disney kept trying to squeeze Star Wars movies into simply because past Star Wars movies had been released there (The Force Awakens and The Last Jedi were both originally scheduled for May releases) until they managed to get Solo into this May 2018 spot. Forcing a movie around a May 2018 release date certainly paid off, huh? They really should have tried a more unique summer release date, maybe an August 2018 spot, if they wanted Solo to be a summertime title. Combine all that with the fact that younger audiences today may not be as familiar with Han and Lando, thus mitigating the appeal of a Han Solo origin story, and Solo's dreary box office performance begins to make sense, even if I doubt anyone thought it would go this low at the domestic box office. The silver lining for Star Wars as a franchise is that The Last Jedi just did a massive $1.3 billion five months ago so this feels not like Star Wars Fatigue but rather the result of a heavily mismanaged release. It looks like Solo is on track for a $230 million domestic box office finish and a little over $400 million worldwide. In summation, everything is not fine here, how are you?

Taking a surprisingly steep stumble this weekend was Deadpool 2, which plummeted 67% this frame, the second largest second-weekend decline in history for an X-Men film, only behind the 69% (nice) plummet of X-Men Origins: Wolverine from 2009. This was also way bigger than the 57% second-weekend drop the first movie saw. Grossing another $42.7 million this frame, the newest Wade Wilson adventure has now grossed $207.4 million domestically in ten days and may struggle to hit $300 million domestically. Maybe placing all these fanboy blockbusters so close together isn't the greatest idea in the world?

Meanwhile, Avengers: Infinity War was one blockbuster that held reasonably well in the face of intense competition as it dropped 44% to gross another $16.4 million for a $621.6 million. Looks like this title will surpass the entire domestic run of the first Avengers movie by tomorrow. In its second weekend, Book Club dropped only 30% from its opening weekend, giving it another $9.4 million for a $31.7 million domestic total. On only a $10 million budget, this comedy is proving to be a solid sleeper hit for Paramount Pictures and looks likely to crack $50 million domestically, something much more expensive recent projects from the studio like Suburbicon, Sherlock Gnomes and Downsizing couldn't do.

After a large second-weekend decline, Life of The Party held quite well this frame as it went down 32%, a much better third-weekend hold than the one seen by Snatched last year, and grossed another $5.1 million for a $39.1 million domestic haul. Also in its third weekend and holding solidly was Breaking In, which dropped 40% this frame to add another $4 million to a domestic haul that stands at $35.6 million. Not holding so well was Show Dogs, which dropped 49% this frame to add $3 million to a domestic gross that's standing at only $10.6 million through ten days. Overboard added $3 million to its domestic gross this weekend, a 35% drop from last weekend. After 24 days of release, this comedy remake has now grossed $41.4 million domestically. Dropping 43% this weekend was A Quiet Place, which added another $2.2 million to a domestic gross that now stands at $179.9 million. Rounding out the top ten was RBG, which continued its impressive domestic run by gross another $1.1 million, a 10% dip from last weekend, from 415 locations for a per-theater average of $2,699 and a domestic total of $5.6 million.

Right outside the top ten was Rampage, which went down 49% this weekend to gross another $802,000, giving it a domestic total of $93.8 million. It looks like Disobedience is winding down its domestic box office run since it lost movie theaters this weekend, though it still grossed another $368,554, a 29% drop from last weekend, for a domestic total of $2.5 million. In its second weekend of release, Pope Francis- A Man of His Word fell 43% to gross another $290,000 for a domestic haul to date of $1.09 million. In its second weekend of release, Paul Schrader's First Reformed fared quite well as it grossed another $282,518 from 29 theaters for a per-theater average of $9,742. Through ten days of release, this acclaimed drama has grossed $425,480, ahead of fellow A24 titles The Killing of a Sacred Deer and Good Time at the same point in their domestic runs. Hailing from China, the romantic-comedy How Long Will I Love U grossed $210,000 from 23 locations for a per-theater average of $9,130.

The top 12 movies this weekend grossed a total of $171.9 million, a middle-of-the-road sum for a three-day Memorial Day weekend haul. May 2018 has currently grossed about $933 million. It'll narrowly do it, but May 2018 should barely get past the $1 billion mark in terms of monthly box office grosses, making it only the seventh May in history to do just that.