Before They Directed Avengers: Infinity War, The Russo Brothers Directed A Subversion of Heist Movies Titled Welcome To Collinwood 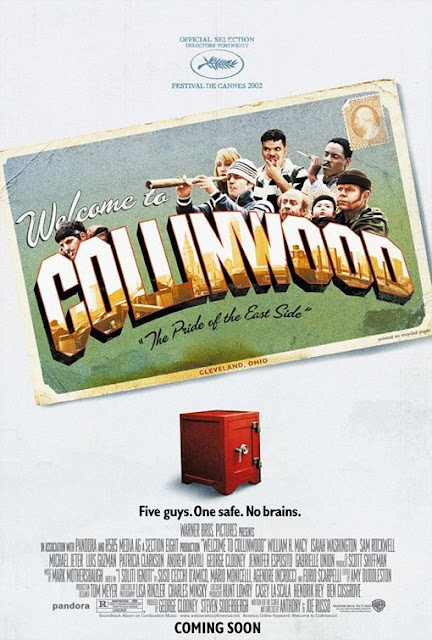 Between placing Captain America into a political thriller or filtering a paintball battle between the lead characters of the show Community through the prism of a spaghetti Western, it's clear directors Anthony and Joe Russo enjoy juxtaposing specific genres with characters you might not expect to inhabit those specific genres. This recurring fixture of their work can be clearly seen in their 2002 directorial effort Welcome To Collinwood, which takes the premise of a typical heist movie and has it led by a gaggle of unorthodox characters that are the polar opposite of conventional lead characters in traditional heist movies.

How are the leads of Welcome To Collinwood different from your average heist movie protagonists? Well, for one thing, our lead, boxer Pero Maholovic (Sam Rockwell) isn't a criminal, he's got a clean rap sheet, while Riley (William H. Macy) is a single father whose always lugging around his newborn baby. The cast contains a number of characters like these two who subvert the expectation that either suave cunning characters (like in The Sting or the Ocean's Eleven movies) or grimy gangsters can headline heist movies. Our leads for Welcome To Collinwood fit into neither of those categories but they're still gonna try to pull off a big heist that'll set them all up nicely financially speaking.

Deciding to have more unorthodox characters headline a heist movie is a clever starting conceit that the screenplay (penned by Anthony and Joe Russo in one of their rare writing credits) for Welcome To Collinwood does have some fun with, though that same screenplay falls short on being as all-around subversive as it could have been. While our lead characters don't fit the mold of typical heist movie leads, various supporting characters (namely two roles played by Isaiah Washington and Patricia Clarkson) feel lacking in distinctive character traits, which brushes up sharply against how a number of our lead characters are packed with quirky features in their personality.

Similarly, the story, especially a plot point revolving around Pero having to connect with a lady named Carmela (Jennifer Esposito) and then finding out he may have actual feelings for her, play out in too straightforward of a manner, making Welcome To Collinwood frequently feel like it's trapped between being a homage to classical heist movies and a straight-up subversion of them. Luckily though, the muddled storytelling is offset by the enjoyable cast and solid direction, both of which keep things breezy and diverting. Sam Rockwell as a wannabe-boxer whose way more of a hotshot in his head than he is in his actual accomplishments is especially fun to watch, if there ever was an actor whose talents were tailor-made for the heist movie genre, it's Sam Rockwell!

The third act is where the promise of the entire starting point of Welcome To Collinwood comes to life as the four remaining players in this heist actually attempt to pull off their big score in a highly humorous series of comedic errors that have these guys struggling to even crawl across a pipe without it becoming a big ordeal. It's a sequence that's clearly channeling The Marx Brothers and Charlie Chaplin in how Pero and company just keep finding trouble around every corner in their attempt at big-time thievery. Seeing these ordinary guys try and struggle mightily with actually executing a heist provides the most entertaining portion of the frequently scattered but also frequently decent Russo Brothers directorial effort Welcome To Collinwood.
Posted by Douglas Laman (NerdInTheBasement) at 11:07 AM