Werner Herzog's 1973 Feature Aguirre, the Wrath of God Is A Masterclass In Cinematic Minimalism 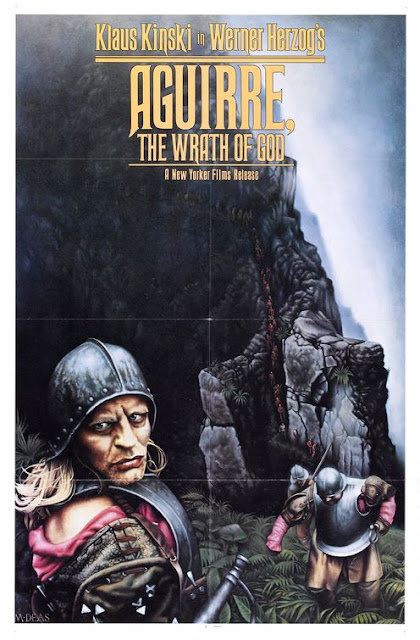 Though I had never watched a Werner Herzog directed movie prior to seeing Aguirre: The Wrath of God, I've been well aware of Herzog's reputation as a filmmaker who takes on harrowing material who speaks in a distinctive German-accented voice and has a devout love for the art of cinema. The high level of acclaim his works have received makes it difficult not to be aware of his impact on the world of movies, though his enjoyable appearances on programs like Rick & Morty and Parks & Recreation also helped ensure he was on my radar and his presence on my mind has only further increased having now seen what an outstanding achievement in filmmaking his third feature Aguirre, the Wrath of God is.


The Aguirre of the title is real-life explorer Lope de Aguirre (Klaus Kinski), who is tasked with accompanying an expedition to help look for the city of El Dorado. Right away, Aguirre is established as a quiet figure prone to just sitting off alone in the corner who also seeks control over the group of people he's traveling with typically by way of manipulating the people around him. This manipulation soon allows him to take control of the group and install Don Guzman (Peter Berling) as a leader who will bow to any one of Aguirre's wills as they search for a golden city that Aguirre is convinced will bring them to gold and glory. If getting there requires treating anyone who questions him with overt cruelty, well, so be it, Aguirre will do anything to maintain power in this quest.

Werner Herzog tells this story in a minimalist fashion (thanks to Wikipedia for confirming that!) that proves to be an utterly fascinating style to tell the story of old-timey explorers in. These individuals who scoured the globe for treasures and riches in countries that weren't their own while frequently claiming such occupied land as their own have been typically depicted in reverent grandiose art throughout history. Countless paintings and statues have been erected to celebrate the glory of these human beings while turning a blind eye to the horrors they caused in the pursuit of fabled treasure that wasn't theirs to pursue. By filtering Aguirre, the Wrath of God through a minimalist lens, Werner Herzog allows a clear spotlight to be shone on the unglamorous nature of Agguire and company.

Instead of being seen as ancient brave explorers who navigated the harsh elements, the journey that these men and women embark on is depicted as one filled with hardships and perils seemingly built solely to punish them for their hubris. Right from the start one of their boats gets caught up in inescapable rapids, leading to a handful of unglamorous deaths that set a grisly precedent for what kind of fate will greet those partaking in this mission. These are people, not demigods, they are capable of dying in mundane ways and they are even more capable of exhibiting the kind of unsavory personality traits that motivate the very worst human beings in history. There's a number of ways that's Herzog's minimalist approach to Agguire, the Wrath of God proves to be thoroughly compelling but the way it immediately underlies the humanity of characters typically seen as beyond reproach is especially powerful.

Also proving to be a benefit from telling this story in a restrained style is the haunting atmosphere it creates for both the characters and the viewer. For instance, the constant silence in this jungle combined with the sight of a seemingly endless jungle is able to instill a sense of anxiety that channels the universal fear of being lost and confused for all of eternity in a subdued, but extremely harrowing manner. The chilling nature of the project is further enhanced by how casually deaths and injuries are dished out to the various members of the expedition. People just get hit with spears with no build-up or warning while characters tend to die abruptly, there is no lingering on suffering to be found here, death just comes in a quick flash for this doomed group of human beings and it's extremely nerve-wracking to watch.

The excellently realized minimalist style of Aguirre, the Wrath of God is omnipresent throughout the film as is Klaus Kinski's performance as the titular lead character. At first, Kinski simply lingers in the background of individual scenes but soon he takes center stage to become the arrogance-driven beating heart of the project. Kinski is absolutely magnetic in the part, particularly in his portrayal of Aguirre becoming more and more deranged as the story goes on, culminating in final sequence, which relies entirely on him alone on a boat monologuing about his importance to a horde of monkeys. Aguirre still desperately clings to his idea of inflated importance even in the face of vanquishment, a transfixing dichotomy that's brought to riveting life by Klaus Kinski.

This is an utterly fascinating sequence whose culmination, depicting Agguire rambling about his importance while constantly failing to catch even one of the numerous monkeys on his boat, serves as a microcosm for how Werner Herzog is using Aguirre, the Wrath of God as a bleak examination of just how pathetic the arrogance that fueled people like Aguirre really was. It's a tale peppered by moments of dark humor ("We just imagine the arrows because we fear them.") and packed with a stunning level of attention to detail in numerous areas ranging from the intricately written script to the beautifully realized period-era costumes. With a stunning film like Aguire, the Wrath of God under his belt, it's no wonder that even people who haven't seen any of his features are well aware of who filmmaker Werner Herzog is.
Posted by Douglas Laman (NerdInTheBasement) at 3:04 PM