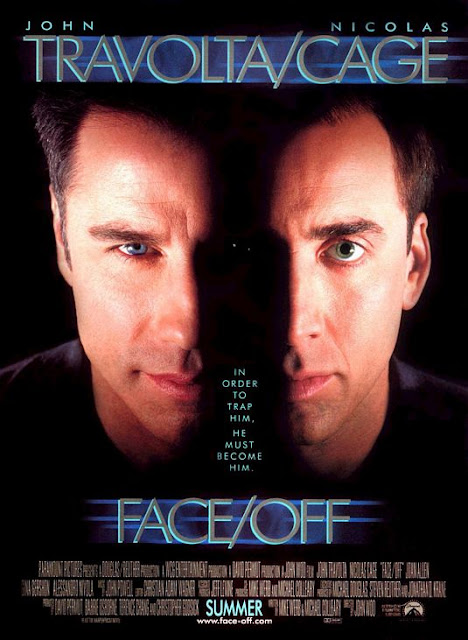 Water is wet. The sky is blue. Nicolas Cage is a whole heck of a lot of fun when doing go-for-broke performances. These are all universal truths of this world and the fact that Nicolas Cage imbues even his most peculiar performances with full-bodied commitment should be something more people should recognize instead of reducing this wonderful actor down to just a meme. You know who else is no stranger to eccentric performances? John Travolta. I'm nowhere near as convinced that Travolta is something special as an actor as I am about Nicolas Cage, but he's had his share of memorable oddball turns playing various man-animals.


Putting these two actors together in an over-the-top action movie from the late 1990's like Face/Off should be a recipe for something so hammy that it should come with Harrington's of Vermont sticker on it. Luckily, the potential for enjoyable madcap lunacy has been fulfilled by director John Woo, who takes a high concept premise and allows his two leading men to just run wild with it. Face/Off is the tale of Sean Archer (John Travolta), an FBI agent whose son is killed by Caster Troy (Nicolas Cage), a world famous criminal that Archer is now determined to find and bring to justice. After years of hunting, Troy finally ends up in the custody of federal agents. All's well that ends well, right?

Not quite. Turns out, Troy placed a bomb somewhere in Los Angeles that's gonna go off soon and only he and his now incarcerated brother know how to turn it off. How will they get this information? Well, it's time for Archer to undergo a top-secret procedure whereby he'll have the face of Troy and then proceed to be locked up in a highly guarded prison so that he can extract the information from Troy's brother. While this mission is going on, however, Troy awakens from a coma and learns about Archer's plan. As retaliation, Troy takes on Archer's face and now Sean Archer, in disguise as Caster Troy, is trapped in prison. Typical Hollywood schmaltz we've all seen a thousand times before.

If there's any chance for Face/Off to go from zero to sixty in no time to flat, it's gonna take that chance and just run with it. Just look at how people react to being shot in this movie. People that get shot with normal bullets don't just slump over and die, they go flying off into the air like they've been hit by a rocket! Those doves John Woo loves so much show up here, but not just in a blink-and-miss-it cameo, but rather, a horde of doves is around every corner of the church-set climax. How fitting that a film so constantly going for the nuttiest option possible in any given situation would emerge from such a ludicrous premise?

Best of all, the lunacy of Face/Off doesn't wear thin even with a 130+ minute runtime. John Woo keeps throwing a steady succession of inventively choreographed fight scenes at the viewer while the screenplay keeps coming up with clever new ways for the face-switching gimmick to affect the plot. Best of all, the extensive Nicolas Cage vs. John Travolta showdown results in both actors doing carefully crafted performances that are extremely fun on a surface level but also show a remarkable level of detail when you examine them closely. Most noticeably, it's impressive how well Cage and Travolta mimic the other actor's mannerisms and body language once the face-switching takes place, it totally sells the idea that another person is inhabiting this person's body.

Cage is probably the most fun of the duo if only for his work in the opening sequences as Caster Troy, a live-wire criminal mastermind who doesn't jug zig when you expect him to zag, he travels to frigging Mars when you expect him to zag. John Travolta can't quite match that level of delicious insanity once Caster Troy takes on his characters face but he's still able to bring an entertaining spirit of escalating unpredictability to his performance. Having John Travolta and especially Nicolas Cage in such rare form alone makes Face/Off worth a look, though John Woo's spirited directing is almost just as entertaining as those two. The inmates are running the asylum in the bonkers Face/Off and the results are so delightful that I say the inmates should always be running things.
Posted by Douglas Laman (NerdInTheBasement) at 12:34 PM