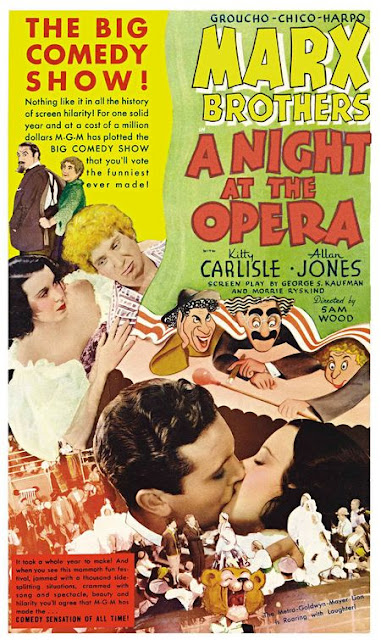 A Night At The Opera signaled a new change of pace for the acclaimed Marx Brothers in that they were now making their comedic motion pictures at a studio that wasn't their longtime home of Paramount Pictures. They were now working at MGM, who dictated some changes to the brothers work compared to their prior efforts. In contrast to their earlier films, A Night At The Opera has, among other differing factors, a much more elaborate plot, one that involves a love story between two protagonists who aren't The Marx Brothers. While recent years have seen many claim the film to be wildly inferior to their earlier efforts, for my money (as a relative newbie to the world of Marx Brothers comedy, to be fair), A Night At The Opera more than maintains the high-quality of the Marx Brothers.


Groucho Marx, Harpo Marx and Chico Marx are all, naturally, playing our three central leads here, with Groucho playing a schemer named Otis B. Driftwood, while Harpo plays Tomasso and Chico plays Fiorello. Fiorello is best friends with an aspiring opera singer named Ricardo (Allan Jones), who finally gets his big break with a contract that's put together by (who else?) Driftwood. Ricardo is also looking at scoring the love of Rosa (Kitty Carlisle), a romance that leads to Ricardo, along with Fiorella and Tomasso, sneaking aboard a ship that Rosa and Driftwood are sailing on. If you think this turn of events will lead to these stowaways getting into a lot of trouble, well, then you're probably familiar in some way with a typical Marx Brothers movie.

The chief complaints A Night At The Opera have received over the years chiefly revolve around the romance between Ricardo and Rosa with even Roger Ebert himself noting that he likes to skip over their sequences when revisiting this comedy classic. For me, I didn't have too much of a problem with them. Ricardo and Rosa in A Night At The Opera feel like the human characters in Gareth Edwards Godzilla movie; not all that compelling but they're still serviceable characters who don't grate on one's nerves when they're on-screen. Also similar to that particular Godzilla movie, the characters one really came to see in A Night At The Opera more than deliver the goods.

Aside from an oddly extraneous sequence of Harpo Marx playing an instrumental tune that seems to go on for ages, The Marx Brothers are in peak form with their comedy in A Night At The Opera. They may be working under more narrative-heavy confines here than they did in the superior Duck Soup, but such confines haven't hindered their ability to deliver some truly memorable pieces of comedy. Such jokes, like one involving a large number of people trying to fit into Driftwood's quarters on the ship, frequently use extensive repetition to such a masterful degree that certain jokes feel like precursors to the Sideshow Bob rake gag from The Simpsons.

This comedic template can also be demonstrated in a sublime fashion in a later joke about the three Marx Brothers constantly rearranging a bedroom and a living room in order to confound a nosy foe. These specific types of joke live and die based on the sense of timing that goes into their execution and it's no wonder that they work so well here given how The Marx Brothers are clearly experts at timing. That's a trait in their comedy that becomes evident in some of their most memorable pieces of dialogue-based humor in A Night At The Opera, there are some cleverly written lines that truly excel in terms of generating laughs from the viewer due to the way Chico Marx and especially Groucho Marx deliver their dialogue.

Of course, in addition to well-done repetition and skillful comedic timing, a number of jokes, including the aforementioned scene of countless individuals trying to stuff themselves into a small room or any of Harpo Marx's pieces of physical comedy, rely on visuals for humor. Just like that hilarious vase with a scribbled version of Groucho's face onto it in Duck Soup, there are a large number of images in A Night At The Opera that, on their own context-free, would be funny and only get more humorous when placed within the larger surroundings of this specific film. Maybe Ricardo and Rosa's romance is disposable, but really, that's one of so few sour notes to be found in the excellent comedy A Night At The Opera, a terrifically funny movie that cemented me as an ardent fan of The Marx Brothers.
Posted by Douglas Laman (NerdInTheBasement) at 1:42 PM