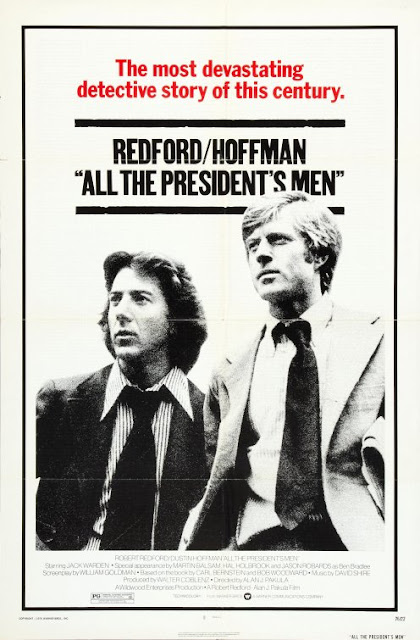 A recurring sentiment in the middle of the daily deluge of Earth-shattering political news transpiring in the modern era is that all these events are so unbelievable that they'd be thought of as too far-fetched if they were to occur in a piece of fictional media. Alas, reality tends to be stranger than fiction and it isn't just the current political affairs of the United States of America that are prime examples of this trend. There are numerous real-life events from the past to choose from if you want to look at just how outlandish reality can become and, especially the 1972 Watergate scandal and the ensuing conspiracies surrounding this event, conspiracies that were uncovered by studios investigative journalists.


Such events are chronicled in the 1976 drama All The President's Men, a film with a restrained style that director Alan J. Pakula makes clearly evident from the opening sequence depicting the break-in at the Watergate complex. Rapid-fire editing, a pervasive orchestral score or other fast-paced elements are nowhere to be seen as Pakula instead opts for elongated shots and a heavy emphasis on silence when necessary that will influence the rest of the film yet to come. Though this approach leaves a handful of moments feeling more stilted than involving, it's mostly a highly successful way to tell this story that creates an appropriate sense of unease over what may be hiding around every corner.

Unease is certainly what Washington Post reporter Bob Woodward (Robert Redford) feels as he begins to do some investigating into this Watergate scandal, an assignment that soon leads him to team up with another writer at The Washington Post, Carl Bernstein (Dustin Hoffman). The slow-burn nature of the film means the viewer follows the duo gradually discovering just how big of a conspiracy there is surrounding this scandal in a way that emphasizes the sheer scale of the corruption they're up against. As the two men learn about library records of White House officials that have abruptly gone missing or futilely try to interview potential witnesses who refuse to talk, they begin to realize this wasn't just a break-in, not by a long shot.

Realizing this real-life tale of Woodward and Bernstein uncovering the larger government conspiracy behind the Watergate scandal in such a subdued manner provides many positive qualities to All The President's Men, but best of all may be how this specific style hammers home how these two reporters are very much the David to Nixon's Goliath. Just look at any of the times Woodward travels down to a parking garage to talk to an informant known only as Deep Throat (portrayed by Hal Holbrook), which carry a subtly evoked ominous tone thanks to simply placing on an emphasis on the emptiness of the environment that these meetings take place in, just having a vast dark empty space surrounding these two men conveys a haunting quality in a muted manner.

The exchanges between Woodward and Depp Throat have some of the best dialogue in William Goldman's screenplay, particularly Woodward's line about how "These are not very bright people" in reference to the individuals trying to cover up corrupt activity committed by the President. These may be powerful human beings, but they're still human beings like you or me and that means they can be taken down. That's the sort of idea, as well as simply standing for those in power to practice transparency and decency, that fuels Bob Woodward in a seemingly impossible quest to crack this conspiracy, an internal motivation that Robert Redford conveys beautifully in his superb lead performance.

Though Redford had been known in his most famous early roles (most noticeably in his efforts with Paul Newman) as a young pretty boy with gumption, Redford equips himself well to a part requiring him to be a more seasoned, though still on the young side, individual with determination to spare. He also turns out to have an engaging rapport with co-star Dustin Hoffman whose entertaining turn as Bernstein, which relies heavily on quickly-delivered dialogue and close to the chest body language that makes his work here feel like a precursor to his famous turn as Rain Man in some respects. The two actors provide a compelling lead duo for All The President's Men to follow into the treacherous world of 1970's journalism crusading against corrupt American politics, a world that bears more than a passing familiarity with our modern-day landscape.
Posted by Douglas Laman (NerdInTheBasement) at 12:39 PM