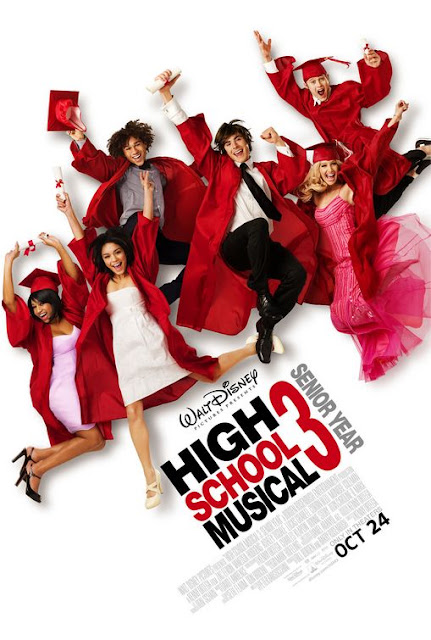 And now it is time for the High School Musical saga to reach their own Return of The King, their own Toy Story 3, their own Indiana Jones And The Last Crusade, the moment where they close out a trilogy and bid farewell to the world that turned their stories into such massive successes. Granted, like all those three aforementioned franchises, the seemingly dormant High School Musical would eventually return (a 2011 spin-off centered on Sharpay and a forthcoming TV show specifically) but this was the conclusion of the tale of Troy Bolton (Zac Efron), Gabriella Montez (Vanessa Hudgens) and their fellow Wildcats as they navigate High School with accompanying musical numbers and elaborately choreographed dancing.

Separating this particular High School Musical adventure from its predecessors is that this one was released to movie theaters instead of going straight to the Disney Channel, so a larger budget has been afforded to this project allowing for more elaborate camerawork and expansive sets for the musical numbers. The money certainly comes through in the visuals as this is a very polished experience, particularly in the musical numbers which take advantage of that larger budget to create some memorable moments like an extended homage to Chicago that couldn't possibly have been done on a TV movie budget.

The script, penned by Peter Barsocchini, who has written all three of these High School Musical films, is one element that doesn't get vastly improved with this movies larger budget, though the writing is certainly a step up from the second High School Musical feature. More than anything else, as a story, High School Musical 3 just feels like an extended victory lap, with characters repeatedly making references to past beloved elements of the franchise while the Troy/Gabriella relationship isn't particularly challenged or evolving, it just stays in a state of homeostasis that allows for numerous chances Zac Efron to gaze longingly into the pupils of Vanessa Hudgins. A desire to keep the world of High School Musical as unchanged as possible also hurts the new characters, like Rocketman and a British assistant to Sharpay, from really establishing themselves as even remotely noteworthy characters.

This adherence to sameness means the plot has a bad habit of getting repetitive during its 110-minute runtime, but what High School Musical 3 lacks in narrative innovation it at least manages to somewhat make up for in maintaining the franchises surprisingly strong track record in musical numbers. Loads of fun tunes abound here, with the best in this entry being a tie between The Boys Are Back (which sneaks in a Mad Max homage midway through) and the highly energetic Now or Never. The plot may be spinning its wheels in this go-around, but the music is still as dynamite as ever, and since High School Musical, as seen by its title, is all about the music, that goes a long way to helping things.

An obviously game cast comprised of actors fully comfortable in these roles and this world after two movies also doesn't hurt things, especially since Zac Efron is clearly emerging as the most talented break-out success of the group, the Justin Timberlake to High School Musical's NSYNC if you will. Efron's the best of the bunch for sure, but the rest of the cast still does solid work, especially Corbin Bleu who really shines whenever he has to pull of some dance moves. I do wish there was more time set aside for series standout Lucas Grabeel to shine though, that guy is just constantly hysterical as Ryan Evans. The cast and the music help High School Musical 3: Senior Year somewhat overcome its more tired tendencies to become a film that never reaches the heights of the dazzling first High School Musical but still manages to find some success of its own.
Posted by Douglas Laman (NerdInTheBasement) at 11:42 AM