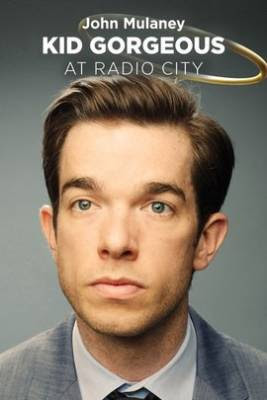 For his fourth stand-up comedy special, John Mulaney: Kid Gorgeous At Radio Hall, comedian/tall child John Mulaney decides to take the old adage "If it ain't broke it., don't fix it" to heart for various aspects of the show. His cadence, which is best described as the voice of a crisp radio announcer from the 1920's, that was abundant in past specials is very much kept intact, which is a delight to listen to simply because of how well Mulaney uses that natural voice of his to his advantage to help punctuate numerous jokes. His observational style of humor from prior stand-up specials is similarly prominent here as is his tendency to delve into extensive and hilarious stories about his childhood experiences.


None of these elements are exclusive to just John Mulaney, but he's just so great at getting one to cackle with laughter at his use of such comedic elements that it feels worth mentioning that such aspects from prior John Mulaney works are still to be found in Kid Gorgeous At Radio Hall. Of course, the specific stand-up material itself differs from his prior stand-up specials (though portions of his work here were performed by Mulaney during his opening monologue on Saturday Night Live last month), with his comedy this go-around stemming from numerous sources, including recurring childhood assemblies meant to instruct young children about the dangers of kidnappers.

Mulaney juxtaposes his casual & smooth voice with some incredibly dark humor in this segment (one of which includes Mulaney impersonating confused children being led to an assembly who, unaware of what the assembly is for, believe they are about be killed) to incredibly successful results. Another hallmark of Mulaney's prior stand-up works, vivid descriptions of quirky people full of tiny humorous details, also crops up here as Mulaney discusses the physical appearance of the guy in charge of leading these assemblies attended by children. In this segment of this comedy special, John Mulaney scores loads of laughs from intricately plotted pieces of humor as well as just realizing how funny it is to see him bellow out "STREET SMARTS!" repeatedly.

Further topics covered in the special include Mulaney discussing his Catholic upbringing, his experiences with celebrities on Saturday Night Live and Patrick Stewart introducing Salt N' Pepa. Mulaney shows some difficulty in managing organic segways between topics for sure, but the material itself is humorous enough to compensate for the sometimes clunky way Mulaney gets from Comedy Point A to Comedy Point B. All of these assorted topics that Mulaney offers comedic observations on are filmed with solid camerawork that makes sure to keep alternating throughout the hour-long production in a seamless way that doesn't distract from the comedian such camerawork is supposed to be filming.

This camerawork captures John Mulaney as he performs in front of a massive stage with a gorgeously designed backdrop that frequently switches color in a soothing manner, lending the affair some terrific set design to accompany John Mulaney's comedic stylings. But even better than the set design, and perhaps the best aspect of the entire show has to be John Mulaney's extended discussion about Donald Trump, whose presence as a world leader is compared to a horse in a hospital. It's an exquisitely written bit of comedy that left me in stitches at just how long the comparison goes on for while remaining remarkably consistent in the amount of humor it creates. It's an inventive piece of comedy that, just on its own, would make John Mulaney: Kid Gorgeous At Radio Hall a winner, but fear not, for there's plenty of other big laughs to be had in here.
Posted by Douglas Laman (NerdInTheBasement) at 1:59 PM