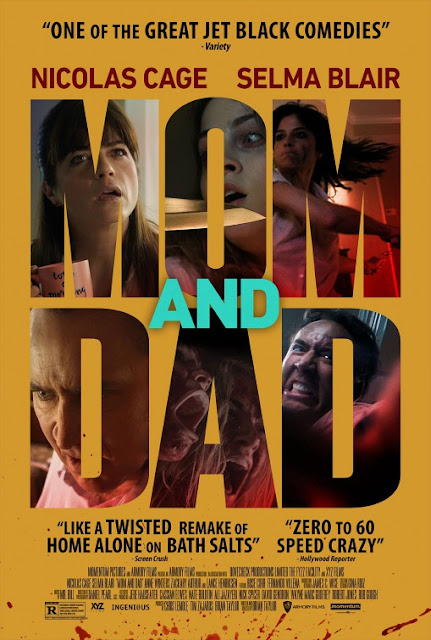 Mom And Dad is kind of like an episode of The Twilight Zone. A really demented disgusting episode of The Twilight Zone, but an episode of The Twilight Zone nonetheless. One can practically hear Rod Sterling provide the introduction to said episode as he lays out how something has gone awry in the world and is leading parents to kill their own children ("They say it takes a village to raise a child, but today, these parents will learn it takes only one person to end a child."). Of course such an unhinged vision would emerge from writer/director Brian Taylor, the man who helped bring to life the two well-liked Crank movies and who also helped bring to life the widely-despised Ghost Rider: Spirit of Vengeance.


Considering how much I despise that particular Ghost Rider movie (how on Earth do you manage to do worse than that disposable 2007 Ghost Rider film...), I was shocked to discover that Mom And Dad actually manages to work OK as shock-value horror fare. There's really not much more to be found here than that, but given the short running time, at least its lack of substance doesn't become too much of an issue. What is sometimes an issue, as well as, paradoxically, sometimes a virtue, for Mom And Dad is how its screenplay feels less like a coherent story and more like a string of ideas that popped into Brian Taylor's head once he got the idea of parents suddenly getting the unshakable urge to murder their kids.

The viewer is bopped around various perspectives of a conventional American family as they go about their routine days just as the epidemic of parents getting the urge to kill their children breaks out. We get scenes from the point-of-view of daughter Carly (Anne Winters), some scenes from the point-of-viewer of mother Kendall (Selma Blair) and also some brief glimpses into the office despair of the dad of the household, Brent (Nicolas Cage). Once parents across America begin to slaughter their offspring, Carly, along with her little brother Josh (Zackary Arthur), at first are just confused and running away from danger before they have to work together to survive their parents.

We also get some bursts of non-linear storytelling that allow the viewer the chance to see Nicolas Cage demolish a pool table while singing The Hokey Pokey (yes, it's as glorious as it sounds). The haphazard way non-linear storytelling is sometimes thrown into the story is what sets of the impression of Brian Taylor just throwing down ideas as they pop into his head regardless of if they're occuring in a proper place in the story or not. For instance, an overlong flashback scene showing Nicolas Cage and his son eating ice cream and reconciling feels like a lot of work just to help set up one darkly comic punchline.

The scattered nature of the production is a result of Brian Taylor leaping into all the possibilities offered up by the central premise of Mom And Dad with gusto, which does have its perks certainly. A scene where Kendall watches her sister give birth goes in a gonzo direction that's a riot to watch, especially since it's accompanied by an excellent needle drop and you've got a handful of similarly off-the-wall sequences littered throughout Mom And Dad that makes it clear this is one movie that won't leave any storytelling possibilities on the table. Nicolas Cage and Selma Blair are bringing a similar level of commendable deranged commitment to their performances.

Anne Winters, on the other hand, is stuck giving a more generic performance in a thinly written role that feels like a stock teenage girl stereotype that stands out in a movie so hellbent on being as memorably offbeat as possible. Neither her nor Zackary Arthur's character, Josh, get all that much to do and leaving the adolescent characters with so little personality feels like one of the most noteworthy missed opportunities of Mom And Dad. At least there's fun to be had with a number of other elements in the rest of the film, which doesn't really add up to all that much as a whole but does have its fair share of "WTF?" bonkers moments that show some imagination on the part of writer/director Brian Taylor.
Posted by Douglas Laman (NerdInTheBasement) at 1:40 PM