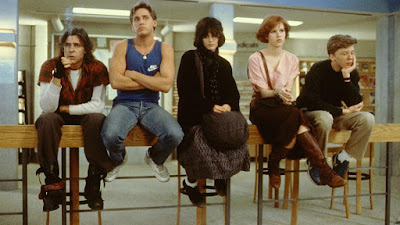 Last month, actor Molly Ringwald penned an essay for The New Yorker detailing her experiences with revisiting the assorted 1980's teen comedies she starred in over thirty years ago. Looking back on the works of that era like The Breakfast Club or Sixteen Candles, she pinpoints numerous instances of troubling or outright sexist behavior on the part of male characters towards female characters which are most notably demonstrated by Bender in The Breakfast Club who treats Ringwald's character, Claire, "...with vicious contempt..." throughout the motion picture. Despite Claire being sexually harassed by Bender throughout the movie, Bender and Claire end up together at the end of the movie in a moment that audience is supposed to cheer for.

The essay is a fascinating read, one that has a noteworthy actor looking back on their most famous works and contemplating how the fame of such projects, especially among teenagers, normalized toxic pieces of behavior towards disenfranchised groups, including women. Per usual for the internet, a woman examining pop culture in a thoughtful fashion inspired widespread bile which extended to late night television host Bill Maher, the champion for the ultimate disenfranchised group in America, that of old white guys who want to yell at minorities and women who dare to question the status quo. Maher dedicated time on his television program ridiculed Molly Ringwald for her opinions by noting "They were teen comedies, not snuff films." Never mind that part of the point of Ringwald's original essay was to note how numerous pieces of dangerous or derogatory behavior were treated nonchalantly in the context of light-hearted comedies.

Maher goes on to note that "You can't blame someone for not being 'woke' 30 years before being woke was a thing."Ah, that old chestnut, this idea that older films are immune from criticism on how they treat women, minorities, LGBTQA+ individuals or any other disenfranchised groups simply because they were released in decades past. This is an argument that constantly comes up in discourse related to people (which are typically members of disenfranchised groups being treated poorly in older films) expressing criticisms with various pieces of older cinema. This rationalization reared its head once again this past weekend on my social media feed in response to someone expressing discomfort how they felt My Fair Lady was misogynistic.

Having not seen My Fair Lady, I cannot express whether I agree or disagree personally with this sentiment. What I can say is it that a single moment from a classic film comes into my head whenever someone uses the excuse of "It's an older movie!" to give a pass to derogatory content in older motion pictures. It comes at the very start of the famous climactic speech of The Great Dictator, wherein Charlie Chaplin's character notes how he'd like to help everyone if possible, "...Jew, Gentile, Black Man, White, we all want to help one another, human beings are like that." In an age when segregation was still the unquestioned default for so many American schools, here was Charlie Chaplin explicitly saying to the world that all people are worthy of equality, no matter the color of their skin.

This came a mere year after Gone With The Wind offered a falsely pristine vision of mid-19th century Southern America that diminished the humanity of its African-American characters. Gone With The Wind's approach to race is not outdated simply by 2018 standards, no, it stands as outdated when compared to other pieces of art from the era in which it was released. And why wouldn't it? The idea of disenfranchised members of the American population being human beings wasn't something that just emerged from the ether in 2007. Why, director Richard Oswalt made the feature film Different From The Others all the way back in 1919 as a way to create a cinematic vessel through which he could champion for the rights of the LGBTQA+ community. That film was released nearly a century ago, long before countless pieces of art that either erased or stigmatized the very same community of human beings Oswalt was crusading for.

Women, racial minority groups, the LGBTQA+ community and all sorts of other oppressed pockets of society have been fighting for rights for centuries now. To ignore how their representation in older art contributed to the normalization of their disenfranchisement is to ignore the unsavory parts of our own history that we must learn from. Now, I should stress, recognizing historical context is incredibly important when evaluating older films, particularly in regards to how the Hayes Code restricted on-screen American film representation of the LGBTQA+ community for decades. Additionally, this essay is not meant to be a support of the idea of censoring or banning older movies due to offensive content, nobody is truly suggesting that. What I am trying to get at here is the idea that it's OK to recognize and be uncomfortable with off-putting material in older motion pictures. That doesn't make you resistant to "challenging art", it makes you a human being capable of empathy.

I should also take a moment to note that liking an older piece of art despite its offensive content is also a valid opinion, just as disliking a piece of art or an aspect of a piece of art because of its offensive content is a perfectly valid take. Any kind of artistic discussion needs these sort of differing opinions to stay vibrant and it's a real shame that the reflex for so many when confronted with someone who finds an older piece of art racist/sexist/ableist etc. is to simply dismiss their concerns altogether simply because said art was made before 2018. If one wants a perfectly succinct summation of what I've been tyring to get at in this essay, well, an on-screen warning that plays before various home video collections of older Warner Bros. cartoons (pictured below) that explicitly notes how derogatory content found in the following cartoons "...were wrong then and are wrong today" expresses it all better than I ever could. 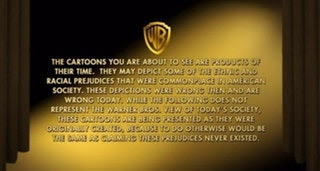 Posted by Douglas Laman (NerdInTheBasement) at 11:05 AM