Once Deadpool 2 Get Rolling, It's A Surprisingly Entertaining Raunchy Comedy 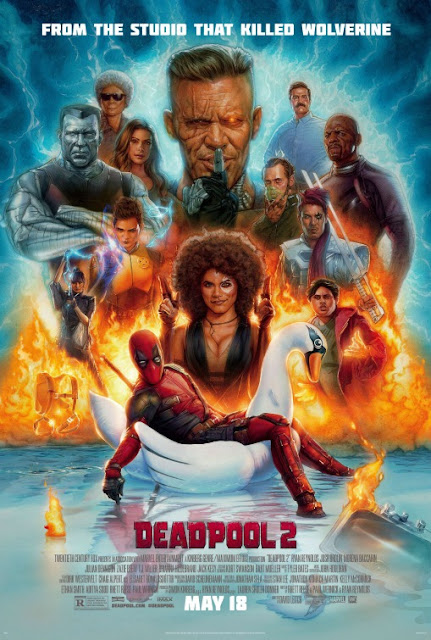 VERY VERY MILD SPOILERS ARE INSIDE THIS REVIEW.

We've been having a pretty good run of comedies in 2018 so far. Not everything has been golden of course (remember Game Over, Man! or Super Troopers 2?) but in just the span of nearly five months, there has been a solid list of well-made comedic films emerging that remind us all of the age-old versatility that this genre has. Comedies can be mystery thrillers (Game Night), heartfelt coming-of-age tales (Blockers), thoughtful family movies (Paddington 2) and thought-provoking political satire (The Death of Stalin), they don't just have to be run-of-the-mill vehicles churned out on the cheap and quick so that David Spade can buy a new condo this coming summer. Surprisingly, Deadpool 2 comes up as the newest 2018 comedy to deliver both further evidence of how expansive the genre of comedies can be and a large supply of laughs.


I say this is a surprise because Deadpool 2 is a comedy sequel, a subgenre that has its share of winners (22 Jump Street or the aforementioned Paddington 2) but it's mostly filled with just modern-day subpar cash-grabs that are forgotten about before the credits even start to roll. But I'll certainly be counting Deadpool 2 as one the better comedy sequels in recent years, even if the first act starts things out on a weaker note. These opening sequences, depicting Deadpool (Ryan Reynolds) living the optimal version of his life before tragedy ruins everything. The tragedy itself arrives in the form of a yawn-worthy storytelling method of giving male heroes motivation that a movie trying to be as subversive and fresh as Deadpool 2 should really be eschewing.

Trying to balance out actual sadness in regards to Deadpool's plight while maintaining the rest of the film's rapid-fire comedic sensibility also proves to be tonal challenge the movie can't conquer. However, once Colossus (Stefan Kapcic) enters the picture, Deadpool 2 begins to drastically increase in quality as it hooks itself up to comic book weirdness and doesn't look back. Also helping things out is that this is where the primary plot of the motion picture comes into play as Deadpool learns that a teenage mutant, Russell (Julian Dennison, so good to see him here after his delightful turn in Hunt For The Wilderpeople), is being targeted for assassination by a time-traveling cyborg called Cable (Josh Brolin).

Deadpool has no interest in saving the kid, or at least, that's what he keeps telling himself. But he does soon realize that he does need to look out for and help Russell, though he might not be able to do this alone. Once Deadpool and Russell meet for the first time, the story of Deadpool 2 moves at an agreeably brisk pace that allows the project to toss in any o'l piece of tomfoolery it can think of ranging from extended dark gags to all kinds of new mutant characters. There's a risk of the proceedings becoming more overstuffed than enjoyable, but to my surprise and delight, the majority of the plot elements actually fit together cohesively. Even better, the scale of Deadpool 2 is still kept relatively small compared to most comic book movie blockbusters, which helps keep the film's feet on the ground so it doesn't end up feeling too extravagant.

I'd wager that the question of whether or not Deadpool 2 is actually funny or not is weighing more on the minds of prospective readers rather than how it handles the scope of its storytelling, so I'll come right out and just say that Deadpool 2 got a lot of laughs out of me for sure. Deadpool's pop culture witticisms, like in the first film, are still hit-or-miss (a Sharknado reference already feels dated), but Ryan Reynolds keeps that shockingly endearing bad-boy "Who me?" charm that allows him to nail a lot of other line deliveries that simply revolve around him reacting to certain situations, people or especially elaborate injuries, Reynolds makes the sounds of pain and discomfort his character expresses so very humorous.

For the film as a whole, a full-on commitment to darker humor results in some of the best gags of the entire project while I commend the three writers of Deadpool 2 (one of which is Ryan Reynolds himself) for allowing the individual characters in the cast to have their own method of generating humor, they're not all just clones of Wade Wilson. This is especially true of new mutant character Domino, whose superpower is being really really lucky, played excellently by Zazie Beetz in an uproarious star-making turn that made me immediately want a whole trilogy of Domino movies. On the flipside of things, certain gags get undercut by some distractingly poor editing that seems to be working around either the improv-heavy exchanges between cast members or last-minute joke additions.

That kind of editing really stuck out to me because it certainly wasn't around in director David Letich's last two movies, John Wick (for which he went uncredited) and Atomic Blonde (his first credited feature film directorial effort). Leitch gets to soak the majority of the environments in Deadpool 2 in the blue color grading that was abundant in his last two movies as well as make some mighty nice looking fight scenes, though those are the only two elements that really echo his prior directorial work which only had minimal instances of humor compared to the wall-to-wall irreverence found here. Though comedy may not be something he's wholly familiar with in his prior directing experience, Leitch does equip himself admirably to directing the countless heavily R-rated jokes Deadpool 2 throws at the viewer.

Admittedly, Deadpool 2 does come off more as a project influenced by its writers and actors than its director, but that's not at all an inherently bad thing and Leitch does fine work behind the camera for this installment, which I would say, overall, does rise above its predecessor in quality. While I'm still not a fan of the character of Deadpool in most of his pop culture incarnations, I'll freely admit to being impressed that this seemingly one-note character has been able to extend a second entertaining feature-length film that manages to extensively pile on the raunch and jokes without coming off as tiring. As an aside, one of those many jokes in Deadpool 2 is an explicit reference to comic book artist Rob Liefeld that only I laughed at in my screening. It was an awkward experience I hope isn't common in Deadpool 2 screenings because man is it ever a good Rob Liefeld joke.
Posted by Douglas Laman (NerdInTheBasement) at 12:12 PM