Mother's Day Weekend See's Avengers: Infinity War Gobbling Up More Cash While Life Of The Party Has Underwhelming Box Office And Breaking In Has Decent Start 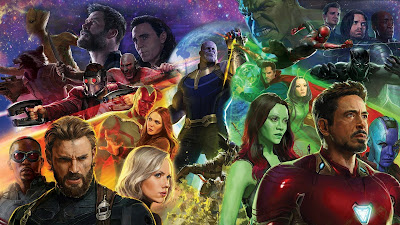 In second place was the new Melissa McCarthy comedy Life of The Party, which opened to $18.5 million. This makes the newest Melissa McCarthy yukfest (which, interestingly, was the first Melissa McCarthy comedy that wasn't Ghostbusters to be rated PG-13) her first star vehicle to open below $20 million. Could more negative reception to recent films like The Boss and Tammy be taking a toll on the stars bankability? Maybe, but if they are, they're more diminishing the stars box office power instead of demolishing it since $18.5 million is a decent figure for a $30 million budgeted comedy to open to (it's a better opening than the one experienced by the more expensive Game Night a little over two months ago, for instance). Interestingly, comedies in 2018 have mostly been doing solid but not great business this year, with only Blockers and Game Night really taking off and Blockers being the only one of five comedies released over the last twelve weeks to open to over $20 million. I'm sure the various studios are hoping summertime comedies like Tag, Uncle Drew or Action Point manage to clear that $20 million threshold other 2018 comedies like Life of The Party have failed to crack.

Bowing to solid numbers this weekend was Breaking In, a new thriller that grossed $16.5 million, not too shabby considering the movies whole marketing campaign was fixated on Gabrielle Union (a reasonably well-known actor who hasn't headlined many movies) and its central conceit of a mom trying to get her kids back, with no brand name or big-time director to give it an extra boost. Costing only $6 million to make, this one's going to be an easy moneymaker for Universal, making this another recent moneymaker, following Girls Trip, that Breaking In's producer, Will Packer, has delivered for the studio. Women of color can headline financially lucrative movies, who knew ...besides any human beings with more than two brain cells?

This was a pretty good weekend for holdovers, as many saw smaller sub-40% dips from last weekend. One such title to hold well was Overboard, which dropped 31% to gross another $10.1 million for a ten-day domestic total of $29.5 million. In its sixth weekend of release, A Quiet Place continued to be an impressive force of nature as it grossed another $6.4 million, a 17% dip from last weekend, for a $169.5 million domestic total. Remember, this horror feature cost only $17 million to make, meaning it's now done about ten times its budget. Right outside the top five this weekend was I Feel Pretty, which dipped 31% to gross another $3.7 million for a domestic haul of $43.8 million. It just needs to gross another $6.2 million to become the first ever non-Bad Moms movie released by STX Films to gross over $50 million domestically. Also holding well this frame was Rampage, which dipped only 27% to deliver another $3.3 million for an $89.7 million domestic haul.

Tully dipped 31% this frame, a solid hold, but one that would be more impressive if it was following up a larger opening weekend. Grossing another $2.2 million this frame, Tully has grossed $6.9 million this frame and it's a toss-up if it can manage to crack the $10 million mark domestically. Still continuing to stick around at the box office three months after its bow was Black Panther, which dropped 40% this weekend to deliver another $1.9 million, giving it a $696.1 million domestic haul. It's worth noting that this is the thirteenth consecutive week Black Panther has spent inside the top ten movies at the domestic box office, a rare feat exemplified by how only eight other movies released in the 21st century have managed to stick around in the top ten at the domestic box office for 13 or more weeks. Rounding out the top ten was the first big arthouse hit of the summer, RBG, grossing $1.1 million from 180 theaters for a per-theater average of $6,472. That's a great hold for the documentary title which looks to drum up great business when it expands into over 300 locations on Friday. RBG has grossed $2 million in ten days, putting it about 10% ahead of I am Not Your Negro (another sleeper hit documentary that, like RBG, was distributed by Magnolia Pictures) at the same point.

Right outside the top ten was Blockers, which had its smallest weekend-to-weekend decline yet as it dipped 35% to add $1.1 million to a domestic haul that now stands at $58.1 million. Interestingly, Fox Searchlight decided to do a re-expansion of Isle of Dogs this weekend, bringing the Wes Anderson title back into 1,046 locations, resulting in a $1.05 million gross this frame (that gives it a $1,004 per-theater average) and a domestic total of $29.9 million. Interestingly, it now looks like Isle of Dogs will surpass the $31 million domestic gross of The Pirates! Band of Misfits to round out the top ten highest-grossing stop-motion animation movies ever at the domestic box office. In its seventh weekend of release, Ready Player One added another $900,000 (a 32% dip from last weekend) to a domestic haul that now stands at $134.5 million. Like Isle of Dogs, A Wrinkle In Time heavily expanded its theater count this weekend as this family movie went back into 1,984 theaters but grossed only $800,000 for a dismal per-theater average of $403. This fantasy adventure has now grossed $96.4 million domestically. Drama Nothing To Lose bowed in 69 (nice) locations this weekend and grossed $646,421 for a solid per-theater average of $9,368. Meanwhile, Bad Samaritan plummeted 70% in its second weekend of wide release as it grossed only $510,000, giving it a 10-day domestic gross of only $3 million.

In its third weekend of release, Disobedience expanded into 101 locations and grossed $437,859 for a per a solid per-theater average of $4,335, giving it a domestic total of $1.2 million. 102 Not Out fell 43% in its second frame, giving it another $275,000 for a domestic total of $966,389. The Rider continued to hold well as it grossed $225,737 from 85 locations, grossing $2,696 per-theater. That's only a 5% dip in its per-theater average form last weekend despite playing in nearly twice as many locations. This Chloe Zhao directorial effort has now grossed $852,047 domestically. The second biggest of this weekend's new limited releases was The Seagull, which grossed $80,607 at 6 locations for a per-theater average of $13,435. The GKIDS release Lu Over The Wall debuted to underwhelming numbers this weekend, grossing only $66,067 from 97 locations for a per-theater average of $681. It's also worth noting that Lean On Pete, thanks to a $64,750 gross this weekend (a 50% drop from last weekend) managed to become the 35th A24 movie to gross over $1 million domestically. Lean On Pete has now grossed $1.05 million after a little over a month of limited release play.

There was a major amount of new limited releases this weekend, one of which was the NEON/Shudder release Revenge. This feature, which also simultaneously opened on video-on-demand services, grossed $46,023 in theaters this weekend, the third lowest-grossing opening weekend ever for NEON. Playing at 36 locations this weekend, it scored a middling $1,278 per-theater average. The documentary Boom For Real: The Late Teenage Years of Jean-Michel Basquiat
Champion grossed $22,500 from a single movie theater, giving it the fifth best-limited release opening weekend per-theater average of 2018 so far. Premiering in two theaters this weekend was Goodland, which grossed $16,545 for a per-theater average of $8,273 while Sollers Point grossed $10,850 from a single movie theater. Always At The Carlyle grossed $9,209 from one location this weekend while Filmworker was only $100 behind with a $9,109 opening weekend, also from a single movie theater. I'm not sure if Terminal, which was released to video-on-demand outlets on Friday, was given a theatrical release by its distributor RLJ Entertainment, but if they did, they aren't reporting box office grosses for the Margot Robbie noir.

The top 12 movies this weekend grossed a total of $127.9 million, about average for the nineteenth weekend in your typical year, save for the two times this decade that the nineteenth weekend of the year was also the first weekend of May, meaning a Marvel Studios blockbuster (specifically, Iron Man 2 and Captian America: Civil War) debuted and boosted the box office big time. This weekend is on par with the same frame from last year when Guardians of The Galaxy Vol. 2 was on top of the box office for the second weekend in a row. 13 days into May 2018, this month has managed to gross $431.4 million and with Deadpool 2 and Solo: A Star Wars Story on the way, it's very likely May 2018 dethrones the $1.141 billion haul of May 2013 to become the biggest May of all-time at the domestic box office.
Posted by Douglas Laman (NerdInTheBasement) at 7:01 PM