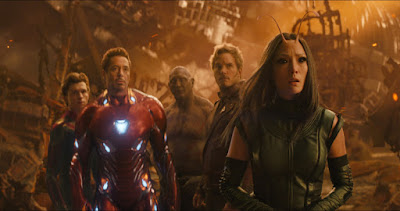 Thanos was able to rule over the box office once again this weekend as Avengers: Infinity War seized its second weekend at the top of the box office, grossing $112.5 million this weekend, the second biggest second weekend of all-time, only behind the $149 million second weekend haul of Star Wars: The Force Awakens. This was a 56% drop from its record-breaking opening weekend, a slightly better hold than the 59% drops that recent early May MCU efforts Avengers: Age of Ultron and Captain America: Civil War, as well as the 58% drop of Iron Man 3, all faced in their second weekends of release. With $450 million amassed domestically after ten days of release, it'll surpass the entire domestic lifetime gross of Avengers: Age of Ultron by Tuesday and looks to be on track for at least $650 million domestically. Basically, it's doing OK at the box office.

In a distant second place was Overboard, which scored a great $14.7 million this weekend. On only a $12 million budget, that's a major financial win for all involved, especially since this title was only bowing in 1,623 locations. Finally, one of these MGM remakes managed to score at the box office! That's the biggest opening weekend yet for a Eugenio Derbez star vehicle and the third largest opening weekend yet for an Anna Faris movie that isn't part of the Scary Movie franchise or voiceover work. By offering a gender-flipped version of the original movies premise, as well as capitalizing on the star power of Derbez (seriously, this guy is becoming a real comedy box office powerhouse), Overboard was able to stand out in the marketplace, a smart move that meant its marketing wasn't just hinging itself on a recognizable brand name like the marketing campaigns for recent MGM remakes like Poltergeist, RoboCop and Death Wish.

In third place, A Quiet Place just kept on bringing the noise this weekend as it dipped only 31% to bring in another $7.6 million for a $160 million domestic total. At the very least, this one looks like it'll crack $175 million domestically, an astoundingly good total for this acclaimed low-budget horror film. Over in fourth place was I Feel Pretty continuing to drum up solid business as it went down 40% to gross another $4.9 million for a $37.7 million domestic total. If it can manage to hold onto it's screens over the next few weekends, this Amy Schumer headlined title could manage to become the first ever non-Bad Moms title ever from STX Films to crack $50 million domestically. Rounding out the top five was Rampage, which added another $4.5 million to a domestic haul that now stands at $84.6 million. George The Monkey and pals will likely end their domestic run just under $95 million.

Opening to $3.1 million at 1,353 theaters this weekend was Tully, a not so good start for the dramedy. This is only the second title ever for director Jason Reitman to open in wide release, following 2014's Labor Day, yet it looks like it'll end up as his lowest-grossing movie domestically that isn't Men, Women & Children. It's also (when exempting Gringo, since she was only in a supporting role there) the second lowest-grossing wide release opening weekend ever for Charlize Theron, only ahead of the $2.4 million bow of The Curse of The Jade Scorpion. There just wasn't much marketing for Tully and it couldn't seem to translate its positive reviews into palpable buzz. It's highly doubtful this one garners a long life in theaters.

Rounding out the top ten was the newest movie from the director of Geostorm, Bad Samaritan. Bowing in 2,007 theaters, this feature grossed only $1.7 million, the eighth worst opening weekend in history for a film opening in over 2,000 locations. Given the minimal marketing this film received, it's not a shocker this title failed to go the distance at the box office but it's doubtful anyone thought it would perform this poorly. Right outside the top ten was Blockers, which dropped 43% to gross another $1.6 million for a $56.1 million domestic total while Ready Player One went down 49% to gross another $1.3 million for a domestic total of $133 million. Meanwhile, Isle of Dogs grossed another $790,000, a 44% drop from last weekend, for a $28.4 million domestic total to date. Looks like this animated feature will end up as only the fourth Wes Anderson movie in history to gross over $30 million domestically.

The Top 12 movies this weekend grossed a total of $159.1 million.
Posted by Douglas Laman (NerdInTheBasement) at 10:58 AM