In Sharp Contrast To It's Predecessor, Ocean's Twelve Is a More Monotonous Kind of Heist 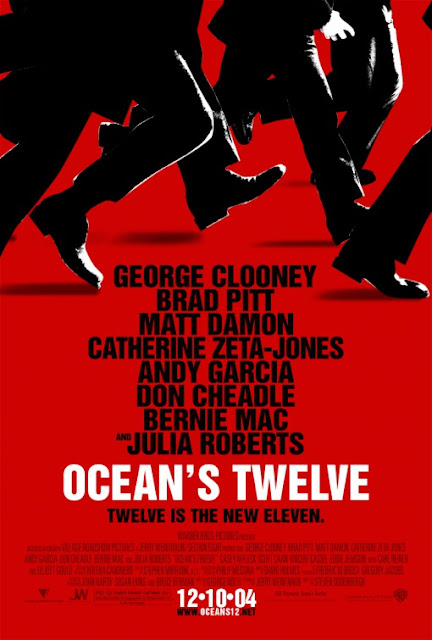 Ocean's Eleven made so much money at the box office that it might as well have been the haul the lead characters managed to grab after a successful heist. With all that dough in the bank, it was inevitable that a sequel would arise. Interestingly, for the follow-up project entitled Ocean's Twelve, the decision has been made to make this a direct sequel to Ocean's Eleven that basically starts off right where its predecessor left off and, instead of having everyone get away scott free after pulling off a heist, the guy who they robbed in the first film, Terry Benedict (Andy Garcia), is looking to get every penny back that the eleven main characters of the first film stole from him.

Danny Ocean (George Clooney) and his cohorts, which include Linus Caldwell (Matt Damon) and Rusty Ryan (Brad Pitt), are now headed to Amsterdam to see if they can pull off a job that will get them all the money they need to repay Terry Benedict (the majority of the money they previously stole has already been spent, naturally). A former European flame of Rusty's, Isabel (Catherine Zeta-Jones), is hot on the gang's trail and the most impressive thief in the world may also be factoring into the proceedings. The odds are stacked against them, but these guys aren't looking to go down without a fight and also an impressive heist or two.

Kudos to Ocean's Twelve for trying to not just do a retread of the first movie, there's clearly an attempt to expand on the previously established Ocean's Eleven world in George Nolfi's writing here rather than just retread on what worked in the past. Unfortunately, Ocean's Twelve can't help but feel like a shell of what came before it as well as only a passable heist comedy in its own right. Simply put, the plot just isn't all that exciting, with the element that sets everything into motion, the ticking clock of having to pay back Terry Benedict, never feeling as urgent as it should. Most troubling for the movie as a whole though is the lackluster new elements brought to the Ocean's Eleven mythos.

For instance, Rusty and Isabel's newly introduced will they/won't they romance just isn't all that compelling especially since Pitt and Zeta-Jones don't have entertaining chemistry together. Way too much screentime is devoted to this subplot that feels all too lacking in intrigue while a new European cat burglar character that serves as a foil for the protagonists is flatly written. The oddball decision to constantly keep the members of the group separated (Bernie Mac is locked up in prison before the movies even halfway over and he just stays there for the rest of the film!) is perhaps the most grating detail of all, isn't the whole point of these movies to watch all of these actors interact together in a humorous fashion?

Ocean's Twelve keeping its ensemble cast so far apart for so much of its runtime feels akin to going to an AC/DC concert that decides to only play songs by Imagine Dragons; this isn't remotely what I wanted to see and what you're giving me as a substitute isn't all that great. Luckily, some genuine fun is found in the third act when Julia Roberts gets to join in on the heist shenanigans in a clever sequence wherein her fictional character impersonates...Julia Roberts. Highly humorous meta antics abound here, especially once Bruce Willis comes around in a cameo to play himself in an enjoyable turn from Willis that involves people constantly telling him that they totally figured out the twist in The Sixth Sense early on in the film.

There are similarly enjoyable moments of humor emerging in the few chances the large cast gets a chance to just hang around and bounce off one another with Danny Ocean getting insecure about how old he looks being a particular highlight. Meanwhile, Steven Soderbergh reprises his role as director from Ocean's Eleven for Ocean's Twelve and his presence is felt in the visually polished nature of the film. The various European locales are served well by Soderbergh's strong eye for memorable shots and he makes even the more monotonous moments of Ocean's Twelve at least pretty to look at. But you could get some pretty images of foreign places on a postcard, the elements that specifically Ocean's Twelve should have in spades, namely memorable bits of rapport between it's eleven lead characters, is in woefully short supply.
Posted by Douglas Laman (NerdInTheBasement) at 10:46 AM