Back To The Future: Part III Show A Million Ways To Have Fun In The West 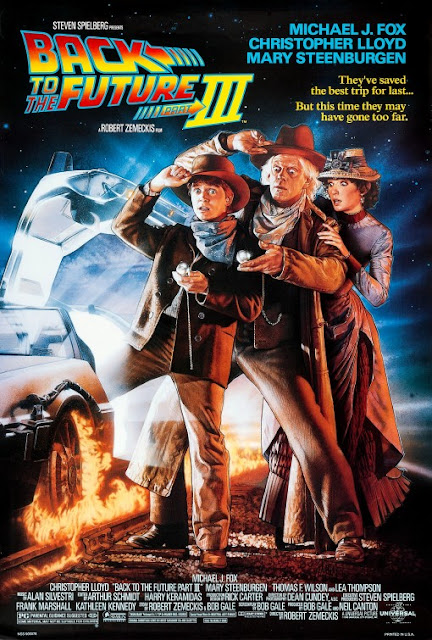 
Continuing directly after the ending of Back To The Future: Part II that saw Marty McFly (Michael J. Fox) receive a letter from Doc Brown (Christopher Lloyd), who revealed in said letter that he had been displaced into 1885. Though Doc Brown mentions that he's happy and content living in this time period, Marty soon discovers that Doc Brown will be killed on September 7, 1885. Now Marty is using the Delorean time machine to go back to the Old West and rescue Doc Brown, a mission complicated by their ticket back to the present getting badly damaged and Doc Brown striking up a romance with a schoolteacher named Clara (Mary Steenburgen).

While Back To The Future: Part II got too weighed down by time-travel timey-wimey stuff, Back To The Future: Part III decides to just plop down two familiar characters (plus Thomas F. Wilson, who played Biff in the first two films, now playing a new adversary) into the confines of a Western, a genre the film welcomes with open arms. You want classic Western movie staples like High Noon shootouts, bar brawls and big set-pieces involving trains? You get 'em all here and they're enjoyable to watch thanks to how Back To The Future: Part III seems to be just having a good old-fashioned romp through the well-worn conventions of this genre.

The movie so readily embraces the possibilities offered up by Westerns that it's hard to resist joining in on the upbeat spirit of the production. Plus, director Robert Zemeckis has shown his ability to pay homage to the past in an exciting manner throughout his career (Who Framed Roger Rabbit alone!) and that skill comes quite in handy here as Marty McFly waltzes around an old West town under the name Clint Eastwood. The "Aw Shucks" straightforward nature in which the film presents its take on the world of a Western is also found in the romance between Clara and Doc Brown. There's nothing in their romantic interactions that'll get tears flowing or your heart soaring, but there's a sweetness to their dynamic that kicks off with their shared love of Jules Verne novels.

Considering him traveling to 1885 is what sets the entire plot into motion and the fact that he's got a romantic subplot that takes up a large amount of screentime, Back To The Future: Part III can easily been seen as The Doc Brown Movie of this trilogy of time-travel tales. Where does that leave Marty McFly? He's still around in a prominent capacity, but it does feel like he's got less skin in the game this time around. Just letting Marty take a backseat when needed isn't a bad thing at all though, especially since a plot thread fixated around Marty controlling his violent urges whenever he's called a coward feels like the weakest story element in the film, a totally extraneous subplot that feels too detached from the rest of the film.

As ever though, Michael J. Fox exudes a charming youthful spirit in his performance as McFly and there's a similar charm to be found in Fox's other role as an Irish ancestor of Marty McFly. Getting his most screentime yet in this franchise allows Christopher Lloyd another chance to provide proof for why he's just so exceptional in the role of Doc Brown. Can anyone else sell scientific jargon and a sincere affection for his buddy Marty McFly like Christopher Lloyd does with such ease? Lloyd and Fox are a lot of fun in Back To The Future: Part III, which ends up being a far from an essential follow-up to Back To The Future, but it is an entertaining enough film that certainly is charming in its love for the world of Westerns, no denying that.
Posted by Douglas Laman (NerdInTheBasement) at 4:22 PM