The Last Picture Show Fully Commits To A Melancholy Tone, Resulting In A Haunting Movie 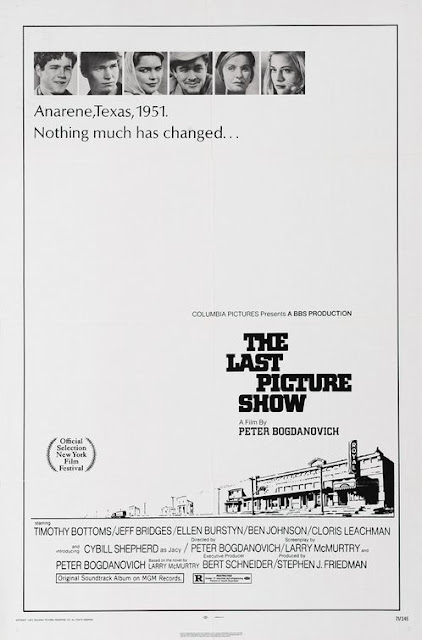 Teenagers finally got to be widely recognized as a source of both revenue and storytelling in American pop culture in the 1950's which meant, because nostalgia is such a cornerstone of our pop culture. it was only a matter of time before art depicting teenagers inhabiting that specific pivotal era were created. The 1970's were bursting with pop culture that depicted teenager characters getting into adventures from Grease to Happy Days (American Graffiti was another 1970's pop culture entity that exploited nostalgia for teenage years, though that one was set in the 1960's). Most of these films were upbeat happy-go-lucky fare that looked back on 1950's teenagers with rose-colored glasses.


That's certainly not the case for The Last Picture Show, a film as bleak as the song Greased Lightning is peppy. Writers Peter Bogdanovich and Larry McMurty (the former individual also handling directing duties) pen this adaptation of the 1966 novel of the same name which chronicles Sonny Crawford (Timothy Bottoms) as he navigates his Senior Year of High School alongside his best friend Duane Jackson (Jeff Bridges). The two teens live in Anarene, Texas, a small Texas town that's crumbling before their very eyes. Long-time residents are dying off, buildings are crumbling, one can watch Anarene, Texas fade away before their very eyes as the film progresses.

There isn't much wistfulness for a bygone era in The Last Picture Show, a fact that may be informed by how Bogdanovich would have been only 12 in the year (1951) that this story takes place. This means, from my interpretation at least, that the film doesn't so much come off as a recreation of specific youthful memories held by the writers and director (which, to be clear, wouldn't be an inherently bad thing to fixate a movie around), but rather a story exploring how suffocating small-town life can be for people like our lead character Sonny Crawford. The frequently idealized folksy Southern town is depicted here as a hellhole that just consumes people and allows themselves to be immersed in self-destructive cycles.

The fact that we aren't dealing with an idyllic portrait of a coming-of-age story is reinforced by frequently stark filmmaking that strips away components like an orchestral score to heighten the reality of specific moments. For instance, a scene showing Jacy Farrow (Cybill Shepherd) being pressured into stripping down in front of her classmates for a pool party isn't depicted in a titillating fashion or in a manner meant to make the party itself look cool, rather, the camera is constantly stuck on Farrow's face, allowing the characters internally conflicted feelings about this situation to come through. A scenario that might have played out as light-hearted escapism in another movie is here rendered as a moment of imperfect awkwardness, a feeling that's pervasive in the average life of an eighteen-year-old.

As the story stretches on beyond Senior Year, the melancholy nature of The Last Picture Show only becomes more and more devastating, as further story details that could easily be depicted in a carefree manner, most notably Sonny and Jacy running off to get married, end up resulting in just more failure. Instead of having a traditional character arc consisting of growth and change for the audience to follow over the course of the film, The Last Picture Show instead has the viewer following Sonny as he gets more and more beaten down by the small-town he's trapped in. His existence is a series of constant defeats, to the point that his best friend, Duane Jackson, almost costs him his right eye.

This is a grueling movie to watch and one that only gets more wearying as it goes on. I can totally and understandably see why it wouldn't for certain viewers but I did find The Last Picture Show to be impressively realized and well-crafted overall. Peter Bogdanovich shows a real skill for crafting ruinous melancholy in subtle ways, much like Chantal Akerman's work behind the camera on Jeanne Dielman 23 Quai du Commerce 1080 Bruxelles, he knows how to make a subdued image emanate so much sorrow. He also does wonderful work directing his actors, particularly Cloris Leachman in a haunting supporting role that stands out as the best performance in a film far from short on top-notch acting. The performances in The Last Picture Show, as well as the film itself, do an excellent job crystalizing a sense of youthful cafard that's difficult to shake.
Posted by Douglas Laman (NerdInTheBasement) at 11:41 AM