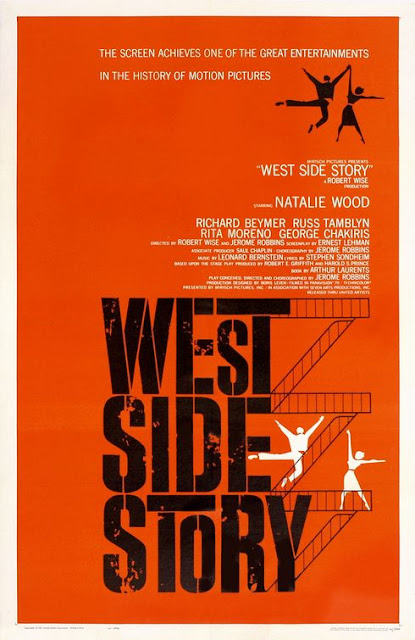 By 1961, the golden age of Hollywood musicals was in high swing as numerous musicals scored major box office success and secured countless prestigious awards. This was a period of glory for the genre that lasted roughly from the 1950's to 1960's and perhaps its highest point came in 1961, when West Side Story came out and became a pop culture phenomenon that ended up scoring a Best Picture Oscar win as well as creating numerous tunes that have become iconic over the years. Thankfully, watching West Side Story today reveals that this is one highly-famous musical from the past that manages to (mostly) hold up, unlike, say, Grease (though that Grease soundtrack is still amazing).

Over in the West Side of Manhattan Island, there are two rival street gangs whose members are all teenagers or young adults looking for companionship and fulfillment they can't get at home. One of these gangs is The Jets, consisting of only white Americans, while the other gang is The Sharks, which is comprised entirely of individuals hailing from Puerto Rica. There's an eternal conflict existing between these two gangs, one that's always producing problems for people. The newest problem to emerge from the Jets vs. Sharks quarrel is that a budding romance between Maria (Natalie Wood), the sister of the leader of The Sharks, and former Jets member Tony (Richard Beymer).

Knowing their romance is forbidden, they try to keep their attraction to one another a secret, though such deception can only last for so long. As one might be able to tell from the plot description, West Side Story (which is based on a 1957 Broadway musical) bears more than a passing resemblance to Romeo & Juliet in terms of its basic story while it's overall method of storytelling also hews closely to the grandiose nature of William Shakespeare's writing. There isn't just a spark of connection between Maria and Tony when they first meet, no no, instead their eyes meet on the dance floor as the crowded room of dancers around them begin to vanish until it's just the two of them singing and dancing the night away.

Bombastic? For sure and that's what I like in my musicals. Musicals are one of my favorite artforms of storytelling because of their resplendent nature. Whether one is watching a musical take on a classic Victor Hugo novel or a musical take on SpongeBob SquarePants, this go-for-broke gusto approach to storytelling is always evident in the expansive world of musicals and the same is true for how directors Robert Wise and Jerome Robbins choose to tell the tale of West Side Story. Applying exaggerated song-and-dance routines to this specific world of street gangs and forbidden romances result in some thoroughly entertaining spectacle, with an opening scene showing the individual street gangs chasing each other down while breaking out into song and constantly snapping their fingers setting the stage for the uniqueness that's to come.

A zesty embrace of the grandiose also makes the romance between the two leads easy to get emotionally involved in. This is a classical vision of romance, one filled with grand gestures and a firm belief in love at first sight, and it's a vision West Side Story's specific atmosphere is able to sell nicely, especially since Natalie Wood and Richard Beymer have delightful chemistry together. One of the smallest in scale sequences of the entire movie is focused on just these two actors exchanging humorous dialogue with the aid of mannequins in a store and the engaging performances of Wood and Beymer make this sequence a total joy to watch, while their work in this scene also helpfully sells the authenticity of the romance between these two characters.

Similarly fun to watch are the assorted musical numbers in the film, which make use of some of wonderfully written lyrics by Stephen Sondheim. It's a remarkable experience watching this film for the first time and slowly realizing just how many tunes we're all so familiar with (namely I Feel Pretty) all originated from this motion picture and the Broadway musical it's adapting. There's really not a dud song in the bunch, though my personal favorites may be the energetic Gee, Officer Krupke, the physical comedy from the actors in their performance of that song is just wonderful, and especially the stirring Tonight Quintet, the latter song feeling like a top-notch precursor to later musical numbers like Non-Stop or One Day More.

Of course, amidst all the fun musical numbers and rivering romance is the extremely uncomfortable aspect of West Side Story that the vast majority of the Puerto Rican characters in the film, including Maria herself, are portrayed by white actors in make-up. It is a very distracting and uncomfortable element to watch throughout the film and also heavily undercuts the stories intended point of issuing a plea for fighting to cease and for unity to be taken up instead. This is an aspect of West Side Story that sticks out like a sore thumb in an otherwise well-made musical feature. Looks like this is one part of the original movie that that prospective West Side Story remake Steven Spielberg is planning to direct could easily improve on.
Posted by Douglas Laman (NerdInTheBasement) at 11:45 AM