Peter Rabbit The Movie Is Decent, Though The Titular Character Is A More Flawed Creation 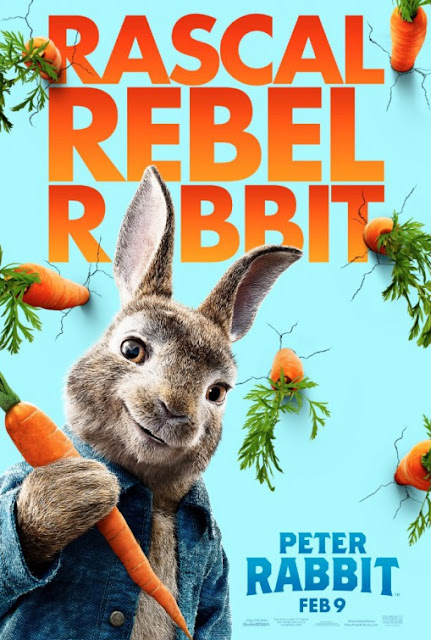 The marketing for Will Gluck's live-action/CGI Peter Rabbit movie made the feature it was advertising look like a nightmare. Loads of pop songs, rampant slapstick and Peter Rabbit tossing out lettuce like it was dollar bills at a strip club, this looked like a parody of DreamWorks Animation movies from 2004-2007, not an actual motion picture coming out in 2018. Thankfully, Peter Rabbit is nowhere near as bad as its trailers would suggest, which is a good thing because 90 minutes of just that initial teaser trailer would likely be classified as a form of torture. The actual movie isn't anywhere close to a Paddington level success but it does register as a decent family movie that works way better at comedy than one would expect.


Based on a series of children's books by Beatrix Potter, Peter Rabbit (James Corden), as you can guess by his name, is a rabbit who lives beneath a tree with his three sisters, Cottontail (Daisy Ridley), Flopsy (Margot Robbie) and Mopsy (Elizabeth Debicki), and his cousin Benjamin (Colin Moody). They're constantly stealing vegetables from the garden a nearby farm that has been recently inherited by Thomas McGregor (Domnhall Gleeson), who doesn't want any animals messing up the home he looks to sell for a fortune. Faced with a new foe standing between him and hordes of vegetables, Peter his friends are soon trying to find ways to exact revenge on McGregor, a plan that Peter becomes especially partial to once McGregor starts falling for Bea (Rose Byrne), a friendly human pal of the rabbits.

Like most 21st-century family movies, Peter Rabbit aims to be a comedy and while it decides to wring a number of gags out of tired sources for family movie humor (namely, predictable slapstick and tired pop culture references) thankfully, a large number of its laughs actually manage to stick the landing thanks to a heavy dose of more cleverly concocted humor. Sometimes laughs in movies can emerge from intricately plotted moments of levity, but Peter Rabbit recognizes that the simple sight of watching Cottontail gleefully try to break as many of her ribs as possible is highly funny on its own merits. There's also a number of laughs to be had from some funny pieces of dialogue enhanced by sharp delivery, particularly from Daisy Ridley and scene-stealer Colin Moody.

Those two and the majority of the other cast members are the other thing that surprises me about Peter Rabbit, it actually knows how to use the actors at its disposal for something beyond just have having their name plastered on the poster. The voice actors do fine work in playing the various woodland critters that inhabit the story while getting actually talented actors like Domnhall Gleeson and Rose Byrne to serve as the main human characters was a great idea, both Gleeson and Byrne interact with their CGI co-stars in a believable way and manage to come off as engaged throughout the entire runtime of the feature.

But then there's James Corden as Peter Rabbit, easily the weak note in the entire project. Corden has some fun line deliveries to be sure, but Peter Rabbit is just not a character whose all that likable as depicted here. I have to wonder if maybe the role is miscast honestly? Corden tries to imbue the character with a wily bad boy attitude that he just can't quite sell, he comes off as grating too often rather than charming. This is a pivotal problem since the movie obviously wants the audience to become emotionally invested in Peter's plight and that's not possible given how the character is written and performed. One has to wonder if casting someone younger in the role who could have vocally sold Peter's shortcomings as the result of youthful immaturity might have made the role more tolerable. Plus, a younger actor play Peter Rabbit would have fit better with the actors playing Peter's sisters, who are all more than a decade younger than James Corden.

The script doesn't just struggle with getting Peter Rabbit to work as a lead character though, it also has recurring trouble with getting certain plot points to organically into one another. This is especially apparent in a key third-act moment where Peter and Benjamin try to help a downtrodden McGregor in a manner that complicates the inner workings of this world that had previously been run on elegant simplicity. Oh well, at least the laughs and the majority of the actors are commendable enough in Peter Rabbit to make it a solid family movie that parents will get more chuckles out of than expected. Hopefully that Peter Rabbit sequel that just got scheduled for 2020 finds a better way to handle the titular character of this franchise tohugh.
Posted by Douglas Laman (NerdInTheBasement) at 11:44 AM