Charlize Theron, Mackenzie Davis And Some Skillful Diablo Cody Writing Are The Champions of Tully 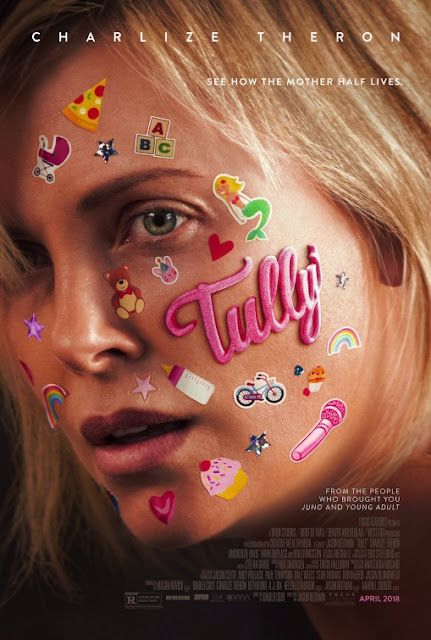 Director Jason Reitman and writer Diablo Cody reunite once again, following their collaborations on Juno and Young Adult, for Tully, a new meditation on motherhood that also brings back the star of the duo's aforementioned project Young Adult, Charlize Theron. Theron gets the chance to play a wildly different character in Tully than the one she portrayed in Young Adult, with her character in Tully being Marlo, a woman who has two children and one more on the way and is feeling...unfulfilled. Life's not awful, she and her husband, Drew (Ron Livingston) get along fine, money's not even too much an issue, but there does seem to be an endless succession of mundane problems every day that she feels like she can never properly address.


Once she has her third child, both those internal feelings of dissatisfaction with her life and her workload as a mom become even more pronounced, to the point that her brother, Craig (Mark Duplass), insist she take on a night nanny, a person who takes care of the baby while the parents get some shut-eye. She eventually takes him up on that offer and the night-nanny is revealed to be a 26-year-old woman named Tully (Mackenzie Davis). Excitable, buoyant, seemingly knowing everything without a problem, Tully is a unique presence in Marlo's life and a friendship begins to blossom between the two women.

What I like best about this story that Diablo Cody has written is how much it allows Marlo to be a person instead of just being a character that slavishly adheres to stereotypes of what mom's are supposed to behave like. Marlo is allowed to exhibit flaws or not instantaneously know how to help every single problem her kids have without being depicted as some villain, those are simply pieces of evidence to prove that she's a human being, one that's feeling lost in this madcap life she's living. Because Cody clearly and welcomingly decides to write Marlo as a person first, that means we get a thoroughly interesting protagonist with layers of complexity to center this story around.

If you think handing a multi-facet character like this off to an actor like Charlize Theron results in a terrific lead performance, well, you get a BINGO my friend, because Theron is tremendous in her work as Tully. Theron is a chameleon of a performer who generates publicity for overt physical traits in her performances, like how she looked heavily rugged in Monster or her shaved head in Mad Max: Fury Road, but in those two performances, as well as her work as Marlo and in countless other performances, Theron excels as an actor in the subtle details. The specific gait Theron gives Marlo to indicate she's weary or the way she changes in how she speaks to Tully as their friendship deepens, these are all microscopic facets of her performance that she takes great care to executing properly and it pays off in dividends.

Mackenzie Davis, in her most high-profile feature film role yet until that new Terminator movie comes out next November, also scores a strong performance as the titular night nanny. Davis seems to have sprung out of the internet itself what with her constant barrage of knowledge on all subjects, from childcare to historical facts to Pinky & The Brain quotes. She's able to portray this individual in a way that suggests real vibrancy without coming off as hyperactive, allowing her to neatly fit into the intentionally mundane world of the movie she's inhabiting. In addition to delivering notable acting individual, Davis and Theron have solid chemistry together as well and some of Diablo Cody's best dialogue emerges in their conversations together.

Jason Reitman's ability to skillfully direct actors that was on clear display in his earlier works is alive and here. Both Reitman and cinematographer Eric Steelberg's approach behind-the-camera in terms of shot choices and camerawork sometimes feels too paint-by-numbers, but there are a number of clever visual choices to be had as well. Most notably, Tully's very first scene in the movie is shot more like something out of a conventional thriller and why wouldn't it be? The presence of such an unknown and unexpected personality in the middle of such familiar surroundings throws Marlo off a bit and subtly channeling the visual aesthetic of a thriller for this introductory scene puts the viewer into her mindset nicely. Speaking of clever visual tactics, there's also some strong editing throughout the film, especially in a montage showing Marlo trying to take care of her three kids right after her youngster child is born.

The editing in this montage gets across the draining nature of motherhood in a way that fits snugly with the rest of Tully, a film dedicated to transcribing the plight of mother's in a realistic manner that doesn't sand the edges off the experiences Marlo goes through. This slavish devotion to realism is so engaging that it's a pity that the ending of Tully does end up feeling too abrupt as it introduces new forms of conflict for its lead character that could be fascinating to explore but end up getting quasi-resolved in an overly tidy fashion that doesn't gel with the rest of the movie. But even ending on that weak note can't dilute the best qualities of Tully, particularly another great lead performance from Charlize Theron.
Posted by Douglas Laman (NerdInTheBasement) at 1:21 PM