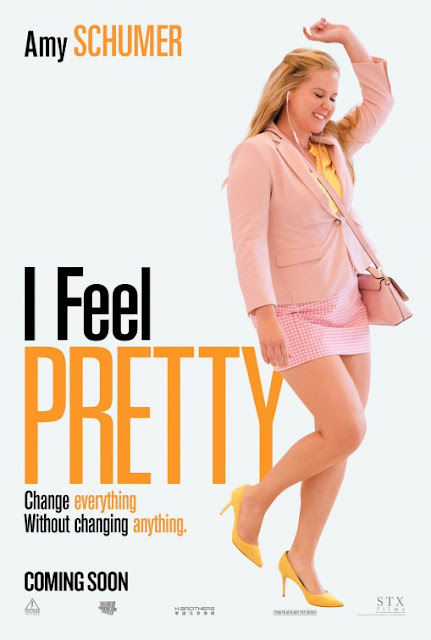 I Feel Pretty is your basic middle-of-the-road comedy, but I do want to give it props for conveying an important message that more films need to carry. The idea of making a whole film dedicated to the idea of reminding women that who they are should define what they think is "pretty" instead of narrowly defined conventions of American society is way a more admirable thesis to pivot your movie around than what you would find in your typical disposable Adam Sandler or Kevin James comedy. Good on I Feel Pretty for having such a considerate theme fueling its whole story, though that story itself, and especially how it's executed, is woefully paint-by-numbers in too many respects.


Amy Schumer is the star of I Feel Pretty, playing the character of Renee, a highly self-conscious woman who works for a high-end perfume company in New York City. Her constant woes about how she looks are turned around when she knocks her head during a spin cycle class and wakes up believing that she's been transformed into someone she considers to be "beautiful" while actually remaining exactly the same in her appearance. Now Renee is bursting with confidence and begins to change everything in her life, from getting a boyfriend in Ethan (Rory Scovel) to obtaining a new receptionist position at her job that allows her to provide some guidance for her companies new line of products aimed at more casual consumers.

This is a high-concept premise (done in the tradition of past similar comedies like Big, which it explicitly pays homage to) that's rife with potential, but unfortunately, a lot of that potential is left untapped. Most damningly, the film struggles with figuring out how to wring effective comedy out of its premise. There are a few too many jokes that come off as being at the expense of Renee thinking she could be as beautiful as she thinks she is, which feel like they undercut the noble message at the heart of the story. Similarly, jokes that entirely boil down to "This person's voice is funny", "This person is overweight" or "This man does yoga that typically is done by women" feel similarly contradictory to I Feel Pretty's moral about embracing who you are.

Similarly, there's an odd pattern of lame jokes being inserted at the end of scenes as if the film's two writers (Abby Kohn and Marc Silverstein, who both also direct) realized they hadn't done a joke in a good solid minute and so it was time to drag out whatever joke they had lying around regardless of if it was funny or not. I Feel Pretty being a romantic-comedy means jokes are intrinsic to its genetic makeup and the fact that so many of the jokes fall flat hinders the film overall. More successful is the similarly importance romantic element of the production thanks to how Amy Schumer and Rory Scovel have fun chemistry in their scenes together.

Amy Schumer's overall performance is actually one of the saving graces of I Feel Pretty for sure. The character she's been handed to play isn't all that well-realized in terms of how she's written, but Schumer compensates for this with an engaging lead turn that allows her to lend authenticity to the more self-conscious side of Renee as well as the more boisterous confident version of the protagonist. Also deserving praise for their acting here is Michelle Williams in a rare comedic role for the actor that allows Williams to take on a high-pitched voice as well as some of the funniest moments of the whole movie. Let's get Williams in more comedies, she seems like she's got the chops for it!

Both Williams and Schumer get some moments to shine in an overstuffed climax that attempts to resolve Renee's problems at her job, her feelings about her appearance and, most haphazardly handled of all, her fractured relationship with her long-time best friends. Juggling all of this in a satisfying fashion turns out to not be something I Feel Pretty is capable of and this means the movie ends on a hurried note that ends up giving half-baked conclusions to numerous key plot details. This is another example of how the writing in I Feel Pretty just gets in the way of this romantic-comedy from being as funny or as thoughtful as it could have been.
Posted by Douglas Laman (NerdInTheBasement) at 12:14 PM