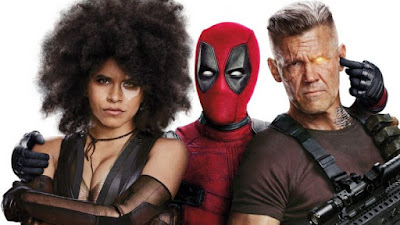 Blockbuster movies that open to massive $100 million+ opening weekends seemingly have it all, but there is one disadvantage to your original movie opening to such high numbers: there's nowhere to but down. Only five movies have managed to open to over $100 million and then have their immediate sequels score bigger opening weekends: Shrek 2, Harry Potter And The Deathly Hallows- Part One, Iron Man 2, The Hunger Games and The Dark Knight. Otherwise, the default is that a $100+ million bow indicates your next movie will be opening to smaller numbers simply because it's hard to recreate the kind of momentum that got you to that $100+ million bow. It was widely thought that Deadpool 2 could be the sixth movie to buck this trend, but in the end, the Merc With A Mouth will have to "settle" for a $125 million bow.

Why didn't Deadpool 2 open bigger than the first one? As said earlier, it's hard for most sequels to gargantuan blockbusters to recreate the kind of momentum that got their original movie to such big numbers in the first place, but Deadpool 2 was especially gonna always have a hard time mimicking the hype surrounding the first Deadpool, which had been in development for over a decade and had both an MPAA rating and marketing campaign wholly unique to high-profile comic book movies. Since the marketing for Deadpool 2 was basically just "Deadpool Again But Josh Brolin Is Also Around Now", beating the opening weekend of its predecessor was always gonna be a challenge, but luckily, its $125 million bow was still a great bow that managed to reaffirm the popularity of this red-suited hero and sets the title on track to become only the fifth R-rated movie to cross $300 million domestically.

Avengers: Infinity War dropped 53% this weekend in the face of Deadpool, though the mega-blockbuster still grossed $28.7 million over the frame, the sixth biggest fourth weekend in history. With a $595 million gross domestically in 24 days, plus another $1.2 billion overseas, more than $300 million of which comes from it's run in China, it looks like the newest Russo Brothers directorial effort may end up making a profit for Disney.

Deadpool 2 wasn't the only new wide release at the domestic box office this weekend. Book Club also bowed to a solid $12.5 million, a great start considering it only cost $10 million to make. Being the only comedy aimed at older audiences in the marketplace allowed Book Club to stand out amidst the competition, giving Paramount Pictures their second straight sleeper hit following last month's A Quiet Place. All hail box office queen Diane Keaton!

In fourth place was Life of The Party, which fell 57% from its Mother's Day boosted opening weekend to gross another $7.7 million for a $31 million domestic total. That's a better hold than Snatched at the same point last year and now the question becomes if this one can cross $50 million domestically, something Snatched couldn't do. Right now Life of The Party has grossed $31 million. Rounding out the top five was Breaking In, which fell 63% to gross another $6.4 million for a domestic gross of $28.7 million.

And then there was the final new wide release of the weekend, Show Dogs. The newest directorial effort from Weerasethakul Apichatpong grossed only $6 million this weekend, a dismal bow that puts the title way behind the opening weekends of comparable titles like Beverly Hills Chihuahua ($29.3 million), Good Boy! ($13.1 million) and Marmaduke ($11.5 million). The only live-action talking animal family movies to have worse opening weekends than Show Dogs came out at least twenty years ago and in significantly less theaters. To boot, Show Dogs scored the thirteenth worst opening weekend ever for a movie playing in over 3,000 theaters (for the record, it was playing in 3,212 locations) and had the eleventh lowest opening weekend per-theater average ever for a movie playing in over 3,000 theaters. Policework and pampering may be able to go paw-in-paw, but apparently, Show Dogs and box office success do not go together so easily.

Overboard fell 52% in its third frame, grossing another $4.7 million for a $36.9 million domestic gross, taking it past the lifetime domestic haul of Eugenio Derbez's last movie, How To Be A Latin Lover. A Quiet Place was the only holdover in the top 12 to fall under 50% (exempting holdovers that increased from last weekend) this frame as it dropped only 37% to gross another $4 million for a $176.1 million domestic total, meaning it's now outgrossed the entire lifetime domestic box office run of Get Out. In likely it's last weekend in the top ten, Rampage dropped 56% to gross another $1.5 million, giving it a domestic total of $92.4 million. Will Warner Bros. be able to give this one the extra $7.6 million it needs to get to $100 million domestically? Probably not, but since Rampage has now grossed well over $400 million worldwide, it's a definite financial win for the studio. Rounding out the top ten for the second weekend in a row was RBG, which grossed $1.2 million, a 7% increase from last weekend, from 375 theaters for a per-theater average of $3,413. Having grossed $3.8 million over the course of 17 days of release, RBG is now the ninth biggest movie ever for Magnolia Pictures.

I Feel Pretty plummeted a surprisingly steep 68% this weekend, giving it another $1.2 million for a $46.5 million. Meanwhile, Fox seems to have taken a cue from Disney and attached an existing title to their newest blockbuster at drive-in theater screenings. Fox seems to have pulled this tactic on their holdover Super Troopers 2, thus explaining why the title leaped up 12% from last weekend to gross another $1.1 million for a $28.9 million domestic total. Having been released on home video this past week, Black Panther finally had its first ever 50+% weekend-to-weekend drop as it fell 60% from last weekend, allowing it to gross another $823,000 for a massive $697.7 million domestic total. Also falling steeply from last weekend was Tully, which plummeted 74% to gross another $570,000 for an $8.4 million. Looks like Tully will end its domestic run below $10 million domestically, making this only the second Jason Reitman directorial effort (following Men, Women And Children) to gross under $10 million domestically.

The top 12 movies this weekend grossed a total of $200.2 million, the seventh biggest weekend ever in the history of May and by far the biggest twentieth weekend of any given year. That's what happens when you've got multiple blockbusters, plus counterprogramming like Book Club and sleeper indie hits like RBG all working in tandem at the box office.
Posted by Douglas Laman (NerdInTheBasement) at 12:07 PM