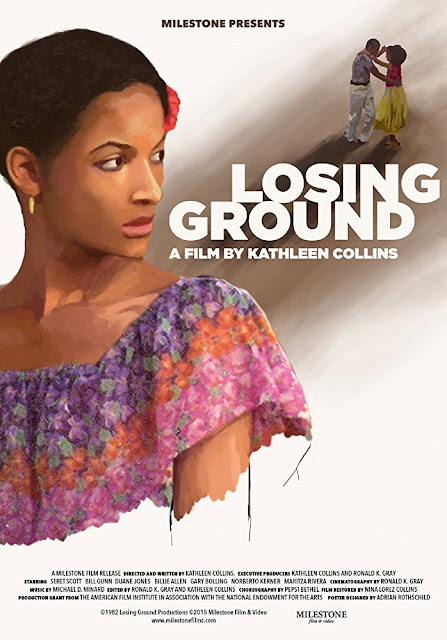 In the early 1980's, long-overdue history was made as the first two American films directed by black women were released. The first of these was the 1981 feature Will directed by Jessie Maple, while the following year would see the release of the subject of this review, Losing Ground, a drama written and directed by Kathleen Collins. Given the immense subjugation facing women and especially women of color in the film industry in that era (as well as in the modern-day world), the unprecedented achievements made by both Jessie Maple and Kathleen Collins simply getting their individual features made was astounding while further impressiveness can be found in the fact that Losing Ground was a high-quality directorial debut for Kathleen Collins (I cannot speak for the quality of Will having not seen it myself).

Apparently a quasi-autobiographical tale, Losing Ground focuses on college professor Sara Rogers (Seret Scott), whose life is caught in a crossroads of sorts. Her husband, Victor (Bill Gunn), an aspiring painter, is causing much of the trouble as he seems more absorbed in his work than his home-life, though his desire to move to a cottage for the summer to spur his artistic impulses gives her hope their marriage can be salvaged. Once they get to the cottage, though, the two find themselves becoming further separated as Victor becomes absorbed in a local Puerto Rican girl named Celia (Maritza Rivera) while Sara becomes the star of a short film one of her students is directing.

The sequences depicting Sara and Victor separated from each other allows the audience the chance to see what exactly goes on inside these two individual minds, with a sharp contrast emerging between their psyches. The script, penned by Kathleen Collins, makes it clear that Victor uses an intellectual artistic exterior for more simple pleasures, like enticing Celia to be with him constantly, while Sara's time shooting a movie has her engaging in extended conversations with fellow actor Duke (Duane Jones) and her own mother about subjects like love and the current state of her relationship. With Sara and Victor having such clearly defined conflicting psyches, it's inevitable that trouble will emerge here.

Trouble does constantly rear its head for the couple and Kathleen Collins frames such pieces of marital quarrels in inventive pieces of camerawork that demonstrate a remarkable sense of versatility. For instance, an early terse dinnertime conversation between Sara and Victor has the camera bouncing back and forth from one end of the table to the other so that it can solely focus on whoever is speaking at that particular moment. This all transpires in a single take that allows for no jarring cuts or edits to interrupt the flow of this sequence. All of this careful consideration has been taken into account on how to execute this dialogue exchange, all the while maintaining a naturalistic tone that doesn't call attention to these impressively subtle technical feats.

There are all kinds of memorable pieces of camerawork throughout Losing Ground that manages the remarkable feat of showing impressive craftsmanship without distracting from the down-to-earth aesthetic of the motion picture. Perhaps my personal favorite example of this features creative camerawork is an extended single take that has the camera stuck in one position for three or four minutes as we watch Sara, Victor, Celia and Duke try to dance together only for all kinds of personal issues to suddenly surface and gradually eradicate the upbeat party atmosphere. The decision to just have the camera linger in one position enhances the tension of the sequence greatly since it allows the viewer to watch these characters succumb to turmoil seemingly in real time, a haunting thing to witness that's helped mightily by the noteworthy performances given by the cast in this specific scene.

It isn't just here that the likes of Seret Scott and Bill Gunn excel though, throughout Losing Ground as a whole the cast manages to crystallize the realistic atmosphere Kathleen Collins is clearly going for. Seret Scott is especially impressive in capturing an engaging lifelike personality in her character of Sara and she does a great job bringing to life the assorted the complexities that are revealed about Sara throughout the film's runtime. Similarly adhering to realism to great success is Bill Gunn, who manages the impressive hat trick of making Victor a guy who's able to emanate enough charm for one to see why Sara could have fallen for him in the first place while also depicting the unsavory nature of his character (namely, his possessive nature towards women) in a way that mirrors how such harmful behavior crops up in real life, especially in a climactic poolside sequence where he uses a guise of being rambunctious to try to get physical with a clearly uncomfortable Celia.

This sequence, which culminates in a powerhouse moment of acting from Seret Scott that has her depicting the release of years of pent-up frustration beautifully, demonstrates what a gift Kathleen Collins has for creating emotionally resonant moments thriving on both realism and well-written characters. These two elements abound throughout Losing Ground and get filtered through imaginative camerawork that renders this 1982 motion picture a highly memorable piece of personal cinema. It's a tragedy that this movie is so obscure (it apparently didn't receive any kind of theatrical distribution beyond film festival appearances back in 1982), but that needs to change in the future. A movie as well-made and powerful as Losing Ground (which, for the record, is streaming on FilmStruck right now as of this writing) deserves far far far more recognition than what it's gotten.
Posted by Douglas Laman (NerdInTheBasement) at 11:39 AM