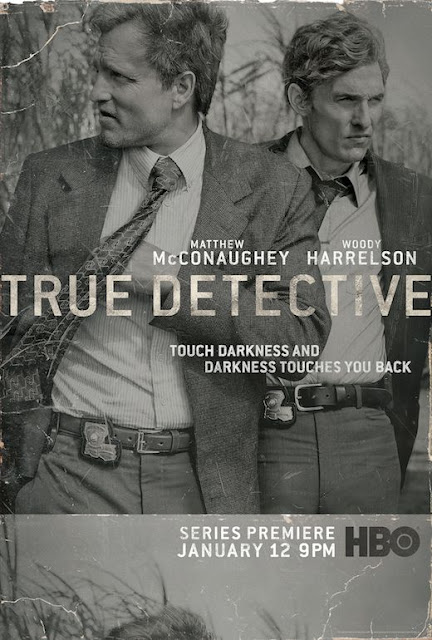 Early on in the first season of True Detective, Martin Hart (Woody Harrelson) tells his homicide detective partner Rust Cohle (Matthew McConaughey) to be way of applying too much of a story to a crime scene early on in the investigation since you could begin to warp the crime scene to fit your narrative. Turns out, though, Rust's early intuition was a solid indicator for what kind of narrative was behind a vile murder that left a naked women tied up with antlers surrounded by various tiny wooden objects said to ward off the devil. Of course, it takes Rust a while to figure out that he's onto something, with the narrative that unfolds from the investigation he and Martin undergo managing to impact both men's lives in profound ways.

True Detective is one of those pieces of art that manages to be both simple and complex in the pleasures it presents. Really, on a surface-level, it's a pitch-perfect mystery story, one that manages to dole out one edge-of-your-seat plot twist after another at a rapid pace. The performances from Woody Harrelson and especially Matthew McConaughey are incredible pieces of work, easily up there with the best slices of acting either performer has done. Meanwhile, both Nic Pizzolatto's writing and Cary Fukunaga's directing work in beautiful tandem to make a story that's as disturbing as it is emotionally engrossing.

But there's also plenty lurking underneath the surface of True Detective that makes it more than just a crackerjack detective yarn. Like, this show is insanely dense in its virtues with each episode on its own providing numerous moments that could easily qualify as perfect encapsulations as to why this show works so well. Because there's eight hour-long episodes to work through, how about I go for an unorthodox approach for one of my reviews and divide this bad boy up into three separate parts that can fully concentrate on three particular facets that stood out to me as extraordinary? Doesn't matter if you like that idea or not of course, I've already written the review that way!

The first element of the first season of True Detective I want to lavish praise onto is...

I've heard so much about this particular season of television programming over the past three years, you'd think the show's quality would have been far from a surprise to me. But not only did True Detective astound me in its top-caliber quality, it also managed to surprise me in the way it told its story, namely, that it makes extensive use of non-linear storytelling. As the show begins, both Rust and Martin (in the year 2012) are being separately interviewed by two officers about their experiences together in 1995 and then later on they discuss their time together in 2002. Nic Pizzolatto's screenplays for these episodes darts back-and-forth between varying time periods, primarily concentrating on the flashback parts of the story but never forgetting about the 2012-set framing device.

It's a most fascinating way to frame these events, but there's a multitude of ways in which they pay off handsomely. Firstly, it allows the fame of the lead duo's actions from 1995 and 2002 to have real weight even before we see them unfold in flashbacks. The two interrogators talk repeatedly about the incidents occurring in those two specific years in ways that can't mask their underlying curiosity about gaining a greater understanding events that have obviously turned into legends in the local area. Before we even see a frame of footage of Rust and Martin taking down a presumed murderer or the two engaging in a fistfight, presenting certain elements of the plot in 2012 allow those specific moments in the characters live to already have their immense presence felt.

The way the characters age over the various years also gets highlighted by way of this framing device, with Woody Harrelson losing his hair over the course of seventeen years and McConaughey...well, he gets the real big physical transformation as Rust. In 2012, he gains an out-of-control beard, vacant eyes and a demeanor entirely reliant on liquor. Dashing back-and-forth between the way his character looks in 1995 and 2012 further emphasizes just how wrapped up Rust has become in solving his case over the myriad of years. Like the best storytelling devices, the non-linear storytelling allows for unmistakable depth that the story would be sorely lacking without, but it never pulls you out of the story you're watching.

LOUSIANA AS A SETTING

Located right next to my homestate of Texas, Lousiana is a place Hollywood rarely ventures to unless it's time for a Mardi Gras celebration or you're a certain late-1940's Tennesse Williams. But the state is very much a focal point of True Detective, as its various denizens get wrapped up in Rust and Martins investigation. Those looking for a glitzy representation of certain parts of this state should look elsewhere, as True Detective instead probes into the seedy underbelly of a state that has numerous political leaders priding themselves on how closely they follow the Christian doctrine. We see this juxtaposition between the sordid crime scene of the state and its "Jesus First" demeanor of its powerful individuals early on in a trailer park full of sex workers, at least one of whom is under 18.

Martin surmises someone higher up on the ladder must be keeping this thing under wraps and operational. This isn't the last time that Lousiana's grimiest locations are intertwined with its more powerful so-called law abiding citizens, and it's doubtful such a story that goes to extremely dark places narratively could have worked as powerfully as it does if it wasn't set in an area like the Southern part of the United States Of America that typically prides itself on being so upright and "Aw shucks, ma'am" in its morality. Plus, placing things in Lousiana helps Rust and his bleak outlook stand out from the usual type of folks you see in Lousiana.

The large amounts of foliage that pepper the Lousiana landscape fits snugly into the show too, since there's constantly an immense amount of massive trees and other plants in the majority of the locations Rust and Martin travel to. It repeatedly feels like our two lead characters are being engulfed by the jungle-like terrain they're walking through as they walk amongst trees that seem to reach into the sky. It isn't just the level of corruption amongst high-ranking Lousiana officials that seems to be outsizing our protagonists, it's also the very terrain they live in that seems to outmatch them on a physical level.

Perhaps no element of True Detective proves more crucial to its success than in the casting of the two leads, who bring to life these engrossing characters who take the polar-opposite buddy-cop dynamic to dramatically tragic places. Woody Harrelson, as Martin, plays an individual who prides himself on being a clean-cut American while harboring two affairs from his loyal wife (played with similar levels of top-notch quality by Michelle Monaghan) and a violent streak that includes punching his daughter. Martin is a troubled man but he's gotta keep his profile as an all-smiles "Everything-Is-Fine" family man intact for as long as possible because, well, that's the only way he see's a man being able to define himself as a success.

So much has already been written over the past three years on how this season of television handles the concept of masculinity and Martin is a perfect example of the level of thoughtfulness this show brings to the subject. Martin see's his devotion to merely acting out the part of a loyal father and husband is enough to forgive his transgressions like those affairs of his, he wants to create a portrait of everything being alright in his hood o'l American nuclear family without actually putting the effort or heart into making that happen. For Martin, a man is a father & husband first & foremost, those are the two roles they must play and that's the only way he approaches those part of his life: as roles. He is a broken man who refuses to acknowledge that plan and simply fact and this gruesome case he's gotten involved in entangles his already intricate life into even more entangled areas.

Woody Harrelson plays that part beautifully, especially in the 2012 segments where you begin to suspect that Martin is starting to realize how empty life is when you adhere to strict and surface-level definitions of what being a man means. But it's in Matthew McConaughey that the show achieves a whole other level of incredible. Good Lord, this guy delivers the best performance of his career in his depiction of Rust Cole, easily up there with his past peak roles like his turns in Magic Mike, Mud and Dazed & Confused. Rust Cole is a distant man who speaks only in in-depth explanations of the world around him. He seems to carry a psychological profile of every human being he comes in contact with and has no time for nonsense or anything that distracts him from his work.

Rust is an intense man, but it's fascinating to see how McConaughey unearths some humanity in a character that could easily have been a cop version of Sheldon Cooper. The loss of his daughter weighs heavy on Rust's soul and is a key motivator in him persisting in a case involving missing children (as well as missing women) that seems to lead directly to high-profile individuals in Louisana. Seeing him in 2012, McConaughey is exemplary in playing the tortured man Rust has become, a human being solely comprised of booze, pain and a still existent determination to complete his case. He's fully enthralling in his performance and that provides a pivotal reason why the first season of True Detective becomes one of the best pieces of storytelling to ever air on television.
Posted by Douglas Laman (NerdInTheBasement) at 2:44 PM