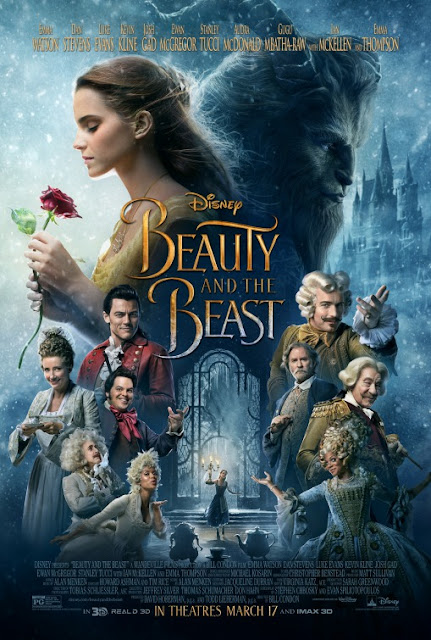 This new live-action take on Beauty And The Beast is an oddball little movie. It wants to be so much like the original 1991 animated classic its remaking, yet it also wants to be a more quasi-realistic take on the source material. That sense of realism also rubs up against its desire to be a big splashy over-the-top musical in some spots. When it just goes for being a straightforward fairy tale (not unlike the tone set forth in Jean Cocteau's 1946 take on this tale as old as time), it actually works fine. When it's trying to figure out how to ground things in realism while also being overly slavishly faithful to the original movie, well, that's when problems emerge.

Honestly, if you can get past the first third of Beauty And The Beast, you're in for a fine if overly derivative time. But oh boy, the first act is rough, an obvious showcase of the people in charge of this production being caught in between wanting to go more towards realism or doing a more heightened fairy tale production (a merging of these two aesthetics can be done of course, as seen in Guillermo Del Toro's Pan's Labyrinth). An oddly rushed prologue pretty much sets the stage for that, as the movie attempts to show the Beast in his human form (both the human and beast form are played by Dan Stevens) reject the beggar woman and then get cursed, but some overly intrusive narration overwhelms the scene and makes everything go by in too quick of a flash. Removing the narration and letting the sequence play out in a less jagged fashion, allowing the viewer to just see the Beast act like a jerk, could have gotten things off to a less jumpy start.

At least the pacing calms down quite a bit as we get introduced to Belle (Emma Watson), whose singing sounds...oddly artificial as she describes the quiet little French village she lives in. It's here we get to meet the best actor, easily, in the movie, Luke Evans as Gaston, a bold brash ex-soldier who has an incredible sense of bravado to him, he's always getting lost in his own reflection and convinced he can have any woman he fancies. Evans plays the part with gleeful aplomb, he works as both an obvious obstacle for Belle to overcome and as someone who's an absolute hoot to watch be so overly arrogant. Josh Gad as Gaston's sidekick, Le Fou, also turns in solid comedic work bouncing off of Evans strong performance.

Anywho, after being introduced to those characters, the script smartly gets the plot moving quite quickly, having Belle's dad (after a poorly edited wolf chase scene) get captured by The Beast, with Belle soon after coming to the Beasts castle and offering to have herself take her father's place. Here, the film picks up significantly as more new storytelling material rears its head and the actors playing both the Beast and the various enchanted household objects are tons of fun to watch. Whoever was in charge of casting this production did a phenomenal job with the casting of these particular roles, as they all do a great job of obviously paying homage to the performances seen in the classic 1991 movie while bringing their own personalities and unique traits to the table.

Of course, even here, some of the movies recurring devotion to realism does become a problem. Take, for example, the first half of the Be Our Guest musical number, where the singing and dancing of the extremely realistic looking household objects feels stilted and off. These are various items that have been designed to look as realistic as possible, so seeing them hop around and engage in full-on musical theater takes some getting used to, though it must be said the final verse of the song does go all-in on being an all-sing/all-dancing affair and that's a lot of fun to watch for sure. If only the entire song could have had that level of unhinged fun to it instead of starting out on such an awkward note.

But once Be Our Guest passes, even the realistic depictions of the household objects work fine in the story as perhaps the best new addition to this take on Beauty And The Beast emerges, with that new element being that more time is spent developing the relationship between the two title characters. Believe it or not, it's actually handled really well and it's super nice that the movie just has them engaging in extended back-and-forth dialogue exchanges that benefit both from some naturally written dialogue and the great chemistry between Emma Watson and Dan Stevens. From their multiple elongated conversations, you can gather why the two would be attracted to each other and find some solace in the other's company. Plus, these extended dialogue-heavy sequences allow for a more gradual change in the Beasts demeanor that makes his overall character arc in this story feel organic.

Speaking of the Beast, his time spent with Belle, building up their relationship would likely not work as well if there wasn't such incredible motion-capture being used to bring him to life. I was honestly nervous about the CG used to bring the Beast to in his first few scenes since the fur looked a little plastic-y (for lack of a better word), but those fears melted away in the face of me being sincerely impressed at the high-quality motion-capture used to bring this creature to life. You can actually see Dan Stevens face buried beneath all that fur and those horns and his terrific facial acting throughout the movie lends an air of humanity to a creature that could so have easily devolved into a just a generic furry CGI blob. Both this incredible motion-capture and the extended periods of time the audience see's him and Belle spend time together do a remarkable job in creating emotional investment in this character and it doesn't hurt that the great Dan Stevens is the one performing this character.

By the time the third act gets kicked off with a spectacular new musical number for the Beast to belt out in sorrow once Belle decides to return home and help her father, Beauty And The Beast has settled into a pleasant groove of its own that still feels too derivative of the original (even the films fun take on the Gaston musical number can't help but frequently just feel like some kind of cover band cover), but even at this point the homages to the original feel more organic and well-done, such as their take on that rightfully famous ballroom dance scene. It doesn't hurt that the weird editing and subpar visual effects (Belle's hilltop singing of "I want adventure in the great wide somewhere" is so obviously on a green screen soundstage, it defines distracting) have given way to cohesive transitions from differing shots or scenes and we've got some great sets and motion-capture populating the movie now. Even the use of teleportation (yes, teleportation) to create a pivotal third act emotional moment between Belle and her father doesn't feel quite as forced as it could have been.

Once the whole movie was over, I left Beauty And The Beast seriously wishing it hadn't been so overly derivative of the original animated film in some respects, especially since it tries to gel a sense of realism to its imitation of the original movie in certain scenes to quite awkward results. But I also couldn't deny that not only were some of my quarrels nitpicky in nature (though plenty of the faults I had with it were not, to be sure), it certainly got stronger as it went along and managed to deliver some strong musical numbers, visual effects and character arcs of its own accord. Even though it's overly familiar, to a fault, it's imitation of the original seems to stem from admiration rather than laziness (though that doesn't fully excuse its overly imitative nature) and this new take on the tale as old as time is still entertaining family musical cinema helped in no small part by its mcuh stronger second and third acts and by a dynamite cast.
Posted by Douglas Laman (NerdInTheBasement) at 4:21 PM