70's Tinged Monster Mayhem Turns Out To Be A Lot Of Fun In Kong: Skull Island 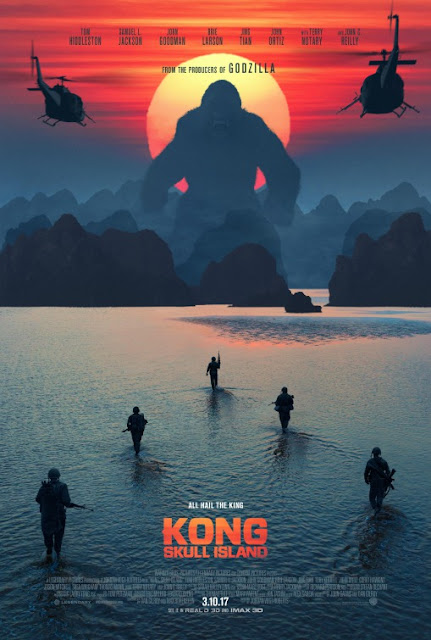 Far too often, remakes and reboots find themselves being merely repeats of the original films they're attempting to remake and/or reboot, to the point where you're left wondering "Why did they even remake this? Couldn't I have just stayed home and watch the original movie instead?" Thankfully, the newest King Kong adventure, Kong: Skull Island, avoids being just a rehash of well-known moments from past Kong movies. No Empire State Building, dinosaurs, movie crew or "Twas beauty that killed the beast" to be found here, much to my personal happiness. Instead, we get an all-new period setting, story and group of characters to follow, though they do retain the loveable nature of Kong himself, of course.

Kong's home, Skull Island, has become a place of interest for a government organization called Monarch. This group is able to put together an expedition crew to investigate thus uncharted island, with the team members including a tracker, James Conrad (Tom Hiddleston), a Lieutenant Colonel Preston Packard (Samuel L. Jackson), anti-war photographer Mason Weaver (Brie Larson) and a highly powerful individual at Monarch, William Randa (John Goodman). They all head off to this unknown place, with their first activity upon arriving being the act of dropping bombs on the premises. This act irritates one of the island's most noteworthy inhabitants, the giant ape Kong (motion-capture for this character is done by Terry Notary) who proceeds to destroy most of the crew in an act of defense, much to the anger of Preston Packard.

The remaining survivors (which is a group that includes all of the previously mentioned characters) are split into two groups; one, led by James Conrad, teams up with Hank Marlow (John C. Reilly), a World War II soldier whose been stranded on the island for two decades, to get to a point on the island where they can be rescued while Packard is hellbent on vengeance against the massive ape that took down his crew. That's basically the two primary character motivations that drive the plot from there and it's a refreshingly streamlined approach to the plot that keeps the story organized, well-paced and easy to follow.

This isn't like the Pirates Of The Carribean sequels where pointless subplots lead to the film tripping over itself as it gets too complex for its own good. Instead, two easy-to-understand conflicting end goals (get rescued or get revenge on Kong) are introduced to keep incongruity going between the various human characters, which helps to keep things interesting during the humans-only scenes and informs the actions of the human characters during the much bigger in-scale monster brawls. Meanwhile, the plot itself is structured in a way that avoids either tedium or the movie devolving into an episodic structure, instead keeping both the characters and story constantly moving in an organic way.

Of course, this more streamlined, if you will, approach to the screenplay does have its foibles, namely that some of the human characters feel extraneous. Some individuals hog up space in the frame early on despite being overly obvious cannon fodder while Jing Tian gets wasted in a thankless role that does continue a disappointing recent trend of American blockbusters (like X-Men: Apocalypse and Suicide Squad last year) giving female Asian characters nothing of note to do or even much dialogue to speak. Our lead character, James Conrad, also feels like he needed an extra dash of personality or some kind of character arc to him, even if Tom Hiddleston's endearing charisma and charming British accent keep Conrad as a serviceable lead human character for the piece.

But enough about the puny humans, what about the monsters in Kong: Skull Island, the reason we're all buying a ticket to this movie in the first place? Thankfully, the monster action presented here is a real treat to behold, with the screenplay (penned supposedly by a number of people though only Nightcrawler director Dan Gilroy, Derek Connolly and Max Borenstein receive credit) sprinkling in fun little bits of monster bedlam throughout the movie while the longer in runtime brawls have a playful inventive spirit to them that makes it super fun to watch Kong go toe-to-toe with beasts like the Skull Crawlers. Also, major points for creating various new monsters like those Skull Crawlers, it really makes discovering what's on this island unpredictable for the audience!

Director Jordan Vogt-Roberts really has a clear commanding eye for spectacle in his work here, particularly in a mid-film skirmish between humans and a skull crawler that is enjoyably paced out in a way to maximize all the suspense it can possibly conjure up. Jordan Vogt-Roberts seems to just be thrilled delivering all of this monster mash mayhem and ditto for cinematographer Larry Fong, who creates many great pieces of imagery in his work here, particularly whenever he gets to utilize the size differences between Kong and the humans, he really lets the scale of the titular beast get felt in those moments. Even during the awkward opening scenes, which attempt to establish numerous separate characters in a rapid succession by way of occasionally stilted dialogue. Larry Fong still provides some solid shot compositions that show a nice level of visual craftsmanship.

There's a similar level of thought going into the majority of Kong: Skull Island, underneath its seemingly simple surface. While I wish that thoughtfulness had gone into making its lead character and a number of supporting characters more interesting, there's no denying it packs a wallop in many other respects, namely in bringing to life some gorgeously realized monster action sequences. Come for Kong bashing in the brains of a Skull Crawler, stay for some fun characters (John C. Reilly is an absolute hoot, maybe the best part of the movie, while Brie Larson, John Goodman and Samuel L. Jackson also turn in memorable work) and the strong directing & cinematography that dare to go in different directions than past Kong movies. Those are the elements that make the super fun and super exciting Kong: Skull Island stand out both from its predecessors and in my mind.
Posted by Douglas Laman (NerdInTheBasement) at 12:25 PM