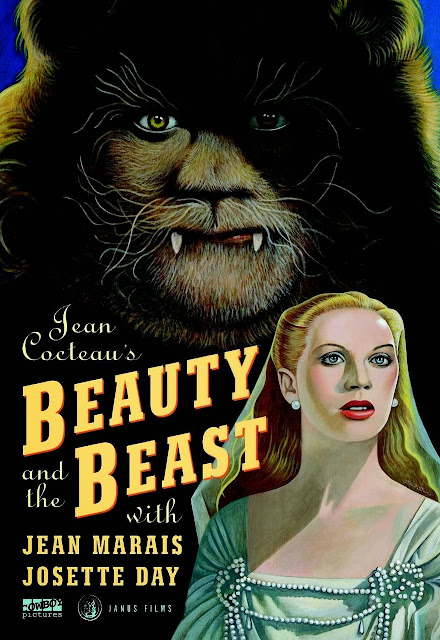 The various 56 films in the Walt Disney Animation Studios canon have become so ubiquitous in pop culture, it can be difficult to remember that, for many of these feature films, they were not the first attempts to translate their source material to the big screen. There's been plenty of big screen versions of Cinderella beyond just the animated Disney version, for instance, Two other Snow White movies (one of them starring Betty Boop!) preceded Disney's historic animated Snow White motion picture in 1937. Thus, it should come as no surprise that Disney was far from the first studio to adapt the tale of Beauty & The Beast in feature-length narrative form.

All the way back in 1946, French director Jean Cocteau wrote and directed a feature film adaptation of this classic fairy tale entitled La Belle at ta Bete (Beauty and the Beast). This appears to be the earliest feature film adaptation of Beauty & The Beast that I can find and it certainly set the stage for future retellings of this story (including Disney's own tale) in many respects. In this iteration, Belle (Josette Day) is the youngest daughter in her family and treated cruelly by her two sisters and also puts up with the romantic advancements of Avenant (Jean Marais). One day, while on an important trip, Belle's father father gets lost and enters an unusual castle, one that happens to have various roses in one of its gardens.

Knowing Belle requested a rose from him whilst he was on his travels, he plucks the rose, angering the owner of the castle, the Beast (also Jean Marais). As punishment for his actions, The Beast requests either Belle's father stay and be executed or the man give up one of his daughters to live with him. Belle volunteers herself for this task and, thus, she begins a life with The Beast, a man with fur covering his body and one who has a bloodthirsty streak to him. Obviously, this is a more restrained version of this tale compared to the animated Disney musical I and many others are accustomed to, though it still provides plenty of deviations from the source material (Belle has only one brother here compared to.the trio of brothers she has in the original fairy tale).

That having been said, this movie certainly hews extremely closely to the style and aesthetic of classic fairy tales, to the point where the film opens with an opening text crawl from the director imploring the viewer to suspend some disbelief for what's ahead. While this unique style may take one a minute to get used to, it didn't take long for me to be absorbed by Jean Cocteau's straightforward non-cynical rendition of this tale as old as time. As a script, his retelling of this story is well-paced and structured while fully embracing a sincere approach to this tale, which is proper if you're really gonna emulate the style of the classic fairy tales that Beauty & The Beast belongs to.

Also helping this unique take on Beauty & The Beast work is a cast that's fully committed to doing this particular type of adaptation. For instance, Josette Day works wonders playing up this incarnation of Belle, an individual who carries a great deal of compassion for those around her (including the Beast), while Jean Marais, in dual roles as both Avenant and the Beast himself, equips himself incredibly well (particularly the titular monstrous character) in creating two differing personalities, to the point that I had no idea he played both Avenant and The Beast until I sat down to jot down this review!

Jean Marais gets to work with some particularly incredible make-up and prosthetics effects whenever he's playing The Beast. Over 70 years later, the work done on this version of The Beast still conjures up menace when he pops up on-screen while also looking incredibly life-like, Marais facial work as an actor doesn't get stilted in the slightest by the presence of the extravagant effects used to make him look like the Beast. Similarly top-notch production value is found in the sets, especially in the Beasts castle, which is an unnerving location full of alive but silent statues and arms sticking out of the walls. It's obvious a lot of high-quality work went into these sets which results in making La Belle at ta Bete (Beauty and the Beast) a particularly noteworthy and enchanting take on this beloved fairy tale.
Posted by Douglas Laman (NerdInTheBasement) at 12:06 PM