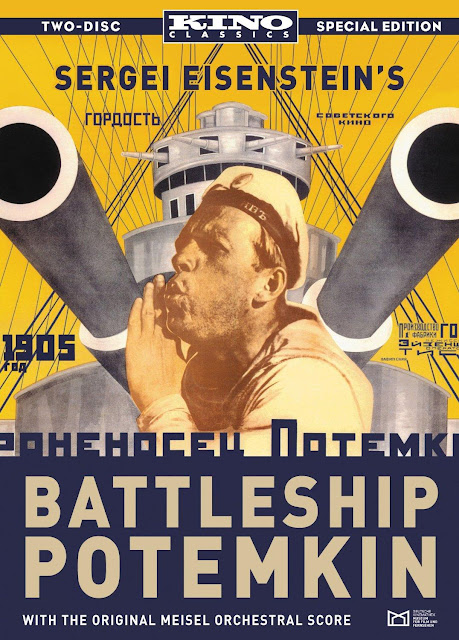 Every revolution begins somewhere. Even the biggest uprisings in history have started with ideas from one human being, a singular mind that had had enough of the status quo and were looking to upend it for their own gain and for others. Sometimes these events end in prosperity, other times they esult in chaos. Either way though, these large interruptions come from humble origins as most things do. To quote the movie Lawrence Of Arabia, "Big things have small beginnings", and that's very much true for the rebellion seen in the 1925 Sergei Eisenstein motion picture, Battleship Potemkin, which recreates a real-life mutiny from twenty-three years prior.

The folks who are working aboard the ship Potemkin have had it up to here with the shabby treatment they've received from their commanding officers. Their superiors are constantly berating them, their living quarters are subpar and the only food they're given is riddled with bugs. Something must change. And since the individuals in charge of this ship are ruthless and not the kind for peaceful cooperation, there is only one option left....REVOLT! On what seems like a normal day, the crew of the Potemkin begin their fight back against their oppressors, eventually taking control of the ship and bringing the body of one of their fallen comrades back to shore to serve as an inspiration for similarly downtrodden citizens to stand up and fight against their powerful oppressors.

From there, we get to both how the actions of this revolting crew members affect both the townspeople (who attempt to defy powerful figures to tragic results) and the crew members themselves, who find potential conflict emerging from other ships out on the high seas. All the while, director Sergei Eisenstein does a remarkable job of keeping the plight of the disenfranchised palpable, you can feel the struggles and rugged lives of these people weighing them down in their earliest scenes. All of the inhumane hardship they endure simply because of their social status, you can watch it become an ever increasing burden on these people by the way the various actors strongly compose themselves physically.

When you're living under those conditions, simply standing by and being a bystander to injustice won't last long. Thus, the revolt begins, a particularly well-filmed sequence that utilizes strong editing courtesy of Eisenstein himself and Grigori Aleksandrov to visually concoct this frantic atmosphere. Just prior to all this chaos being unleashed aboard this vessel, similarly skillful filmmaking can be seen in how tension is ratcheted up in the breaking point for the crew, where several men are being forced to shoot their fellow comrades at the orders of a malicious higher-ranking officer. The camera cuts around to various viewpoints in an attempt to show just how many people in this tiny confined space are waiting to see what happens with this event that could change their entire live forever.

If the men fire their guns at their own fellow crew members, their obedience towards their superiors is assured. But if they refuse, they have definitive proof that it is possible to summon up the courage necessary to fight back, to stage the kind of revolt essential for all of these people in these dire circumstances. The way Battleship Potemkin is able to convey all of that riveting drama just by utilizing quick cuts, close-ups and stirring music is phenomenal, you can gather just how much pressure is on the actions of a few men in these precious moments. Right after they refuse to fire, that's when the revolt begins and the tremendously powerful directing & editing most certainly carries over into these extended sequences as well.

The fact that the film is able to create so much intensity just from the way it cuts from one shot to the next truly speaks to the notable of commanding potency found in the way Battleship Potemkin retells its true story in cinematic form. Just look at how engrossing a sequence where innocent uprising civilians are fired upon. The chaos and fear felt by the various citizens here is palpable, all coming through without the aid of dialogue. Battleship Potemkin truly knows how to get at the heart of the co-existing fear and courage fueling these human beings, who will stand up to injustice no matter what brutal costs await them.
Posted by Douglas Laman (NerdInTheBasement) at 9:07 PM