The Animals Are Running Mild In We Bought A Zoo 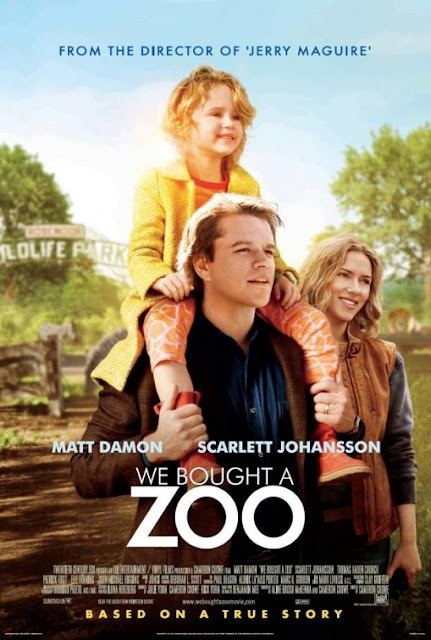 We Bought A Zoo. We Bought A Zoo. We. Bought. A. Zoo. A little over five years after its initial theatrical release, the title of this 2011 Cameron Crowe motion picture still feels like a goofy joke, to the point that the host of this year's Oscars, Jimmy Kimmel, devoted an entire segment of the ceremony to mocking the film as part of his fictitious long-standing feud with Matt Damon. Add in how Cameron Crowe's recent artistic endeavors haven't gone great (Aloha was one of the worst movies of 2015 and his Showtime drama from last year, Roadies, has already been forgotten) and it's not hard to see how We Bought A Zoo has become a punchline.


Watching the movie itself, it's interesting to note the film isn't really bad, especially as far as modern-day live-action American family movies are concerned, but it's nowhere near good enough to break free of the reputation it's cultivated based on its title and the career trajectory of its director. Like a lot of these family movies, We Bought A Zoo concerns a single dad,  Benjamin Mee (Matt Damon) trying to make things work with his precocious youngsters, one of whom is a little girl whose around to be adorable and drop insightful witticisms that you'd think a child so young wouldn't say. Very unique type of character right there. The other kid is a 14-year-old boy in the midst of puberty who has a strained relationship with his dad.

More tension is gonna crop up between father and son once Benjamin chooses a unique location for the family to live. Their new home happens to come with a zoo, one they have to help run, finance and manage or else a bunch of exotic (and even some endangered) animals will be put to sleep. So, the family, along with a number of overtaxed employees at the zoo, must try to get the zoo in tip-top shape for a July 7th opening date in order to make back the massive amount of money Benjamin into this place. If you're wagering that some father/son bonding will ensue, you're dead on and are likely going to guess the majority of the plot turns that ensue.

That's the kind of the issue with We Bought A Zoo, it's most certainly not bad it just feels like we've all been here before and even the unique environment of a zoo doesn't help make the film really stand out. These same plot points have all been utilized before (and will be utilized again of course) by far better movies and there's not much in the way of interesting characters or unique filmmaking to excuse the more rote nature of certain story elements. Granted, most of the storytelling issues are more mundane than outright bad, save for the final 10 minutes which has more fake-out endings than the third Lord Of The Rings movie.

At least the actors are all game for what's happening on-screen, including Matt Damon, who gives a natural presence to his more thinly-sketched lead character. Scarlett Johansson gives probably the best performance as a zoo worker that may just have an infatuation with Benjamin, though it's very much worth mentioning that John Michael Higgins is in this as a zoo inspector who seems to have wandered off from a Nickelodeon sitcom. Much of We Bought A Zoo is extremely mundane (which is kind of odd considering this is a movie about a family living in a zoo) and then Higgins waltzes in chewing the scenery with overly stylized facial expressions and body language. He's actually a lot of fun in his brief over-the-top screentime even if I'm still not sure what kind of direction he was receiving from Cameron Crowe.

The few times We Bought A Zoo goes humorously over-the-top (such as in a father/son argument that involves Matt Damon bellowing about how "cool" his dream of living in a zoo with "cool animals" is), it becomes more interesting to watch, though the rest of it, to be fair, is mostly just boilerplate family movie fluff. It's heart seems to be in the right place, the directing isn't awful, the actors are all giving this film what they can. Really, there just needed to be something in the overly familair script that had the level of boldness seen in the decision of naming a movie We Bought A Zoo.