Safety Last! Is The Sort Of Film That Puts A Grin On Your Face And Makes You Love Movies 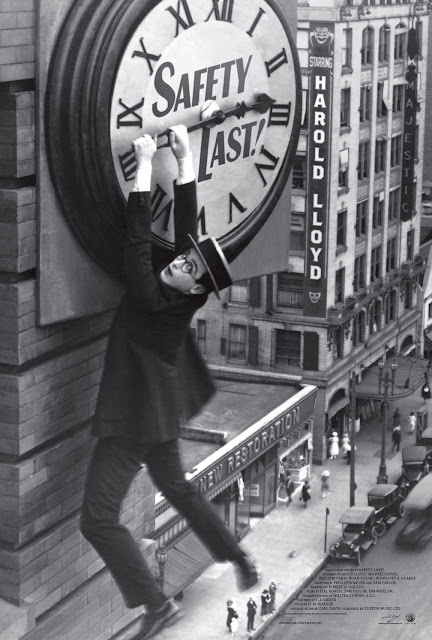 Safety Last! is not just a movie I thoroughly enjoyed (to put it gently), but also one that cemented my feeling that the silent movie comedy is one of my cinematic subgenres. It's such an enjoyable corner of filmmaking, charming, humorous and showing a remarkable amount of craft on the part of the filmmakers and the actors who are working with a medium of storytelling that was still in its most nascent stage. Without sound or color by their side, the guys and gals behind these classic silent movie comedies managed to create wonders with the limited amount of tools at their disposal, demonstrating an incredible amount of artistic ingenuity.

That kind of ingenuity is far from being in short supply in the 1923 Harold Lloyd comedy Safety Last! Buster Keaton and Charlie Chaplin may be the most well-known icons of this era in Hollywood, but Lloyd was no slouch himself in terms of how his movies are still acclaimed and widely viewed today. This particular movie served as my own personal introduction to the cinematic works of Harold Lloyd and his distinctive style of silent movie comedy and I can handily say I find it no surprise that this man and his work still manage to be highly regarded today if even a handful of his other films in his filmography are even a tenth as good and smartly crafted as the absolutely incredible Safety Last!

Like many young men in the early 20th century, Harold (Harold Lloyd) has gone off to the city to make a name for himself. This way, he can create a financially lucrative life for his beloved girlfriend, Mildred (Mildred Davis). Of course, rarely in life do things go exactly as planned, so Harold's great big ambitions manage to not pan out quite as expected. After a number of months living in the city, he's working at a department store where he finds himself overtaxed and not finding anywhere near the financial fortune he hoped to get when he got to the city. Still, he keeps Mildred's spirits up by sending her letters promising her things are going swimmingly for him in his newfound environment.

When she comes into town by surprise one day, Harold's gotta make her think he's the big shot in the department store, which ends up creating a chain reaction of events that lead him to suggesting to the boss that they should have a fellow climb a building to promote the store, a stunt he ends up being more of a participant in than he expected. Safety Last! is as much of an intricate demonstration on how to execute set-up and pay-off in a motion picture as it as a laugh riot with the screenplay by H.M. Walker, Jean Havez and Harold Lloyd himself being absolutely impeccable in the way it subtly and explicitly sets up future character actions or gags without robbing moments in the here and now of their effectiveness.

Harold inadvertently getting him roommate into major trouble with an ornery police officer? That's plenty funny as its own scene but this isn't just an excuse for a quick gag but rather something the movie is able to later utilize to set the entire climax of Harold climbing a building into action. Similarly, Harold pretending to be the manager and showing off his "office" to Mildred is something that also helps get Harold involved in the finale. All of the plot points work like that, managing to synchronize with the comedy of Safety Last! to work in sweet tandem to create something truly enriching. Even the very character Harold Lloyd plays, Harold (he's referred to as The Boy in the opening credits) is a marvelous creation, an individual ripe for getting into comical situations while also constantly keeping the audience's sympathy even when he gets too big for his britches.

For some reason, Harold Lloyd strikes me as a slightly more subdued form of silent movie physical comedian in his posture and body language. He's not above stylized antics to be sure but his acting in Safety Last! evoked to me a more down-to-Earth quality that does fit perfectly for this story set in the then-modern era and the financial tribulations one faces when adapting to an entirely new home. Lloyd turns out to be a great performer in that regard, making the characters various personal plights incredibly involving and similarly excelling when it comes to playing in an everyman in more heightened circumstances. Plus, like I said, he's also gifted when it comes to physical comedy; this little crawl-shuffle walk he does to evade a snobby superior at his work named Stubbs had me laughing harder than I've laughed at a movie in a good long while.

The two directors on this project are Fred C. Newmeyer and Sam Taylor, two individuals who also manage to turn in exceptional work in Safety Last! With so many technological restrictions on filmmakers in this era (there's no way to do color or sound, for instance), it's incredible to watch the likes of Newmeyer and Taylor soar under these constraints and even demonstrate the virtues of this specific era of filmmaking. With no dialogue at their side (occasional title cards come up to clarify the dialogue being exchanged between certain characters), the two directors are forced to rely almost entirely on visual storytelling, a type of storytelling they prove to be most adept at.

Just the way certain shots are composed or organized had me giggling, and the way the duo are able to juggle the various character perspectives in the climax without allowing things to get muddled is similarly a top-notch achievement accomplished in an incredibly subdued manner. Really, is it any wonder with this kind of directing, not to mention the hilarious jokes, splendid acting and sharp writing, that I found myself bowled over by Safety Last!? This incredible comedic masterwork serves as both a phenomenal demonstration for the kind of cinema this era of Hollywood could accomplish at its peak creative drive and just a tremendously impressive creative accomplishment in its own right.
Posted by Douglas Laman (NerdInTheBasement) at 12:48 PM