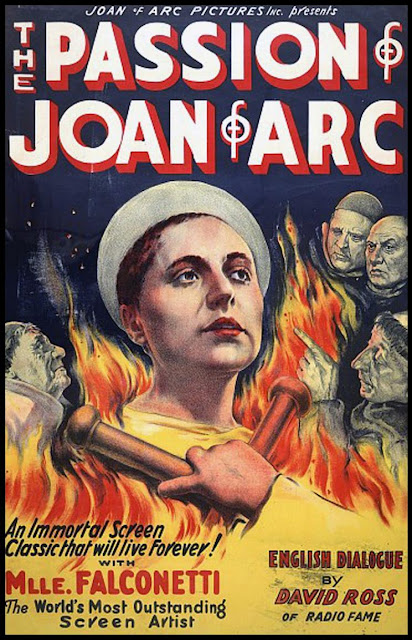 As I've mentioned many times before how one of the best parts of Hamilton is the way it zeroes in on the humanity of larger than life historical figures. You get to fully understand the likes of George Washington, Aaron Burr (sir!) or Alexander Hamilton in a way that reminds you these were just human beings, like you or me, trapped in larger-than-life scenarios. Director Carl Theodore Dryer takes this same approach for his 1928 French film The Passion of Joan of Arc, which applies this style of storytelling to, as the title indicates, the real life figure of Joan of Arc, an individual with a story more than ripe for being told in the format of a feature film.

Some brief opening text clarifies that The Passion of Joan of Arc is taken from historical documenats recounting the trial that sentenced Joan to her doom, meaning we're getting an authentic account of a majorly impactful historical figure in her weakest moment. We are not privy to the actions that led Joan of Arc (Maria Falconetti) to this moment, instead, we see her placed at the whims of an array of older men. This court of clerics, threatened by the upheaval caused by her very presence. She dares to say that God is not only speaking to her but wants her to carry out certain actions in His name that threaten the status quo.

These actions spur a trial filled with hatred and contempt, as the various clergymen try to pry some words from Joan that will tarnish her past work and prove she's just crazy. Even in the midst of this trial, as well as her being repeatedly humiliated outside of the courtroom, Joan of Arc is steadfast. Despite being constantly warned, despite being given an explanation for why she was being held on trial in this manner, nevertheless, she persisted. There's a strength to this depiction of Joan of Arc, much of it drawn from Dreyer and Falconetti's willingness to show this characters downtrodden state her accusers curelty has driven her to.

But showing her at her weakest makes her more determination all the more powerful. Yes, Joan recognizes how bleak things are. She's not above shedding tears in the face of adversity. That's the normal human reaction to such massive tribulation. But Joan provides inspiration in her reaction to all of this sorrow, preferring to die at the hands of these Clergymen and become a martyr or a symbol for the people rather than live as their prisoner. That's why Joan of Arc has endured as a noteworthy figure for centuries now even beyond the borders of France. She's a symbol of steadfast perseverance in the face of massive amounts of hardship.

Having a movie like The Passion of Joan of Arc shine a spotlight unto the more vulnerable parts of this historical figure would be nothing without a strong actress leading the way, and thankfully, this project has Renne Jeanne Falconetti. Now, The Passion Of Joan Of Arc is an entirely silent motion picture, with not even an orchestral score or basic sound effects being woven into the proceedings. This means the pressure's on Falconetti to create an absorbing performance without the aid of verbal communication and lo and behold, the actress works wonders with her facial expressions to create a palpably tragic figure, one that mixes together the vulnerability and strength inherent in this historical figure to create something that truly resonates.

Deep pain and an equal measure of resolve can be seen in Dreyer's recurring trick of zooming in the camera on Falconetti's face. Within her eyes, you can see how much this trial hurts her very being but you can also see how she refuses to lose her will or devotion to God even in these trying times. Falconetti isn't the only aspect of The Passion Of Joan Of Arc that manages to flourish amidst the idiosyncratic flourishes of the movies filming style. Most notably, Dreyer frequently utilizes low-angle shots that have Joan being dwarfed by her accusers. Combining that camera angle with the more narrow aspect ratio creates this claustrophobic atmosphere that immediately puts you in Joan's frightened mindset.

This visual trickery helps one become incredibly invested in the plight of Joan Of Arc in a whole new way, which makes the bleak but hopeful conclusion all the more emotional. As Joan of Arc is burned alive at the stake, people rebel against the scoundrels who have murdered an innocent woman, showing that her spirit will live on even after her body is destroyed. That fierce determination of hers is still impacting other people even after her demise, something that's reinforced by the level of influence Joan of Arc still carries in the real world. That's the beautiful conceit at the heart of The Passion Of Joan Of Arc, an engrossing examination of one of histories boldest and bravest human beings.
Posted by Douglas Laman (NerdInTheBasement) at 3:56 PM