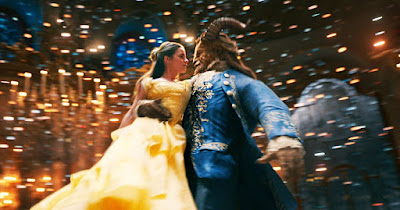 With another $88.3 million, Beauty And The Beast continued to be an incredible box office juggernaut, handily leading the domestic box office and securing the second best second weekend drop for a movie opening over $150 million, only .4% the exactly 49% dip of Jurassic World. A 49.4% is truly fantastic for the release though, on par with the 48% drop Cinderella saw in its second weekend despite that 2015 Disney family film making over $100 million less on opening weekend. Beauty And The Beast has already taken in $316.9 million in ten days and looks to be on track for a final domestic gross of at least $460 million.

Lionsgate's newest attempt to kick-start a new franchise dropped this weekend in the form of Saban's Power Rangers, which debut to a decent $40.5 million. Looks like this one managed to revive an older kids TV show to the world of live-action cinema better than Land Of The Lost, Speed Racer and Thunderbirds, though it wasn't as big as the granddaddies of this subgenre, Transformers, Teenage Mutant Ninja Turtles (both the 1990 and 2014 versions) and the 2009 G.I. Joe movie. This one's got the third biggest opening ever for Elizabeth Banks for a movie that isn't tied to the Hunger Games or Spider-Man franchise, is the ninth biggest opening weekend ever for Lionsgate (behind an assortment of YA-novel adaptations and a 2009 Madea movie) and has nearly doubled the entire domestic cume of director Dean Isralite's last movie, Project Almanac, in one weekend.

On a $100 million budget, this start for the new Power Rangers movie is decent, but not great and it's easy to imagine Lionsgate wanted a bit more considering they've launched the Hunger Games and Divergent franchises to $50+ million opening weekends on this same late March weekend with far smaller budgets. Why didn't this go higher? Well, the action-free teaser trailer (which was the sole piece of marketing for the movie for three whole months and ran on multiple blockbusters) likely caused confusion, starting off the public's perception of the film as some kind of gritty reboot of The Breakfast Club rather than a superhero movie. Future trailers and commercials emphasized the sci-fi action, but the ads didn't quite show off definitive personalities in the various rangers or the villain, which even the 2014 Ninja Turtles movies promos did by showing off the various iconic personas of the four turtles. They at least emphasized a light tone that likely made it appealing to younger moviegoers and utilized the massive fan-base of this franchise to create an OK start for the movie which should just creep past $100 million domestically. The plan is to do six of these things, which I doubt happens, but they could likely get a sequel out of this one, especially since an A CinemaScore from audiences indicates that viewers liked what they saw.

Kong: Skull Island hung in there in third place, taking in another $14.4 million, a 48% decline from last weekend that brings its domestic gross to $133.5 million. This one's holding considerably better than the 2014 Godzilla movie which was crucial for it since it had a 32% lower opening weekend than that Gareth Edwards motion picture. Kong's newest motion picture should finish its domestic run in the neighborhood of $155-160 million, a solid cume especially given the massive numbers it debuted to in China over the weekend.

People just weren't looking to deal with Life this weekend as the sci-fi horror film flopped in its opening weekend, grossing only $12.6 million in its opening weekend. For Jake Gyllenhaal, this is an opening weekend that's 15% worse than the debut for Source Code, which had a far smaller budget than Life, and 5% worse than the bow for End Of Watch, which also cost way less to produce than Life. Where did this one go wrong? Honestly, Life seemed to suffer by the hand of Sony/Columbia's marketing team, which keeps trying to market their tentpole movies in the same fashion. The fact that Life was R-rated came as a complete shock to me when the Red-Band trailer for it dropped last week since the marketing had otherwise presented it as a PG-13 sci-fi film. Notice too how stuff like Passengers (a romantic drama) and Inferno (a globe-trotting thriller) were squeezed into marketing platforms that pitched them as conventional action films. The studios marketing people have gotta work on that in the future, though Life had its own hurdles to work through including mixed reviews. This one will probably end its domestic run in the neighborhood of $30-35 million at best.

Rounding out the top five was Logan, which added another $10.1 million (a 43% drop from last weekend) to bring its domestic total up to $201.4 million, making it only the second title of 2016 to hit $200 million domestically, following Beauty And The Beast of course. This makes it only the fifth X-Men movie ever to crack $200 million domestically, the biggest solo Wolverine movie ever and only the fourteenth R-rated movie in history to cross $200 million domestically. So, yeah, this one's doing well. Speaking of doing well, Get Out continued to impress, grossing another $8.6 million (a 35% dip from last weekend) to bring its incredible domestic cume to $147.4 million. This one's gonna crack $150 million sometime this week, an incredible feat for the motion picture.

This weekend, the chips were down for CHiPS and....well, it didn't go so well, as the movie grossed only $7.6 million. For Live-Action TV show adaptations, this is sixty-eighth highest grossing opening weekend ever for that subgenre, just behind the $8.1 million bow of Sgt. Bilko from twenty-one years ago! It doesn't get much better in terms of Action Buddy Comedies, where CHiPS falls in the fifty-second spot, slightly behind the bow of The Glimmer Man, also from 1996! Even on a $25 million budget, this isn't too good, which you can chalk up to a virtually non-existent marketing campaign and the lack of big laughs presents in whatever meager marketing materials Warner Bros. sent out. This one will likely end its domestic run just under or above $20 million.

Moviegoers kept on going to The Shack, $3.7 million of them to be precise, as this Christian drama went down 37% to bring its domestic gross to $49 million, making it currently the tenth biggest Christian movie ever. Those Power Rangers certainly hurt The LEGO Batman Movie this weekend, as the arrival of a new action movie heavily geared towards kids took its toll on LEGO Batman, as this animated comedy went down 57% to gross only $1.9 million this weekend. This means The LEGO Batman Movie has now grossed $170.8 million. Rounding out the top ten was micro-budget horror movie The Belko Experiment, which grossed another $1.8 million this frame. That's a 56% drop from its opening weekend, a better second-weekend drop than past BH Tilt titles Incarnate and The Green Inferno. Belko has grossed $7.5 million in ten days, making it the second biggest movie ever for BH Tilt.

And now we come to an oddball new release, Wilson, a comedy starring Woody Harrelson and Laura Dern that debuted in 310 theaters to minimal marketing and grossed a dismal $330,000, which is good for only a per-theater average of $1,065. Now, call me crazy, but despite the mixed reviews for this one, I feel like a comedy starring these two could have made more money than this. Put it in 1,000 theaters with a shred of marketing over the summer where it could play as counter-programming to big blockbusters, you coulda made a decent buck with it I wager. Instead, this is the third movie (following A United Kingdom and Table 19) over the past six weeks that Fox Searchlight Pictures has oddly burned off in a barely-there theatrical run with zero marketing. Don't know what's up with that and because of this odd release it looks like Wilson will easily be the lowest-grossing release from Fox Searchlight (and the first to miss $1 million domestically) since I, Origins back in July 2014.

The Top 12 movies this weekend grossed a total of $192.3 million, the second biggest twelfth weekend in any given year, though down about 22% from this same weekend last year when Batman v. Superman: Dawn Of Justice debuted. It's very much worth mentioning that March 2017 has already grossed $1,045 billion, not only making it far and away the biggest March in history (with five days to go in the month to boot!), but also the first March in history to gross over $1 billion. Impressive stuff and it's also worth mentiong that by tomorrow the first quarter (which is the first three months of a given year) of 2017 will surpass the first quarter of 2016 to become the biggest first quarter in history. Needless to say, the 2017 box office is off to an incredible start.
Posted by Douglas Laman (NerdInTheBasement) at 1:09 PM