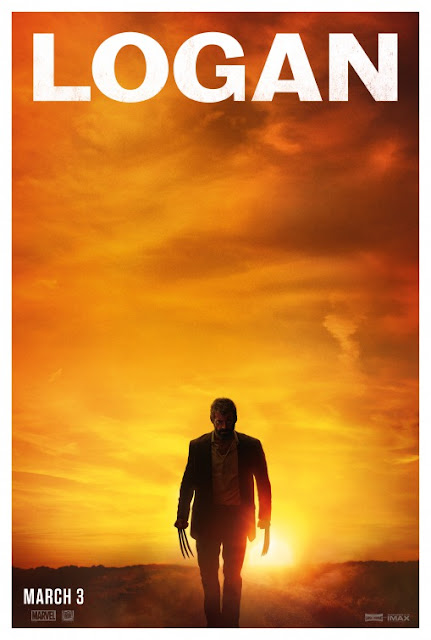 If there's one thing I can ascertain about James Mangold after watching his two Wolverine movies (The Wolverine and the subject of this review, Logan) it's that he's truly enamored with a version of Wolverine dealing with the character separated entirely from the X-Men team and living a life as a battered recluse. Mangold seems to be fascinated by the questions posed by Wolverine's weariness as he ages ever onward and Logan makes a strong case for why he'd be so enamored with that side of the character. Here, James Mangold and company go full-on R-rated in their exploration of Wolverine in an older, sicker and battle-weary form.


In 2029, things aren't going so good for humans and mutants alike. The United States Of America has turned into a bleak dingy hellscape where people are still trying to go about their business as usual, like the near-future visions of America seen in RoboCop and Looper. The mutant population has dwindled significantly, with no new mutants being born in years. As for Wolverine (Hugh Jackman), well, the once-noteworthy superhero is now taking care of a mentally debilitating Charles Xavier (Patrick Stewart) off the grid. Driving around as a chauffeur to make money, Wolverine, in this booze-reliant weary form, less recalls a traditional superhero than he does Jeff Bridges character in Crazy Heart.

But the legend of his actions from years past still rage on, so much so that a woman has called him for help. Specifically, she wants Wolverine to take a young girl with mutant powers named Laura (Dafne Keen) to a place where she can be safe from some nefarious high-powered individuals. From there, Logan takes off like a rocket as a quasi-road trip movie wherein Wolverine is forced back into the role of protector/hero he's been running from for awhile now. The focus on this journey is squarely focused on Wolverine, which makes a Logan a nice reprieve from a number of recent comic book movies (like last years two DC Extended Universe offerings or the last X-Men movie) that feel stuffed to the gills with characters and storylines in an effort to set up sequels and spin-offs.

By contrast, Logan concentrates itself on watching Wolverine grapple with his ever-looming mortality and having to protect both a precocious youngster and a mentally waning former mentor. Pairing him up with these two particular individuals leads to some fun humorous bits and an even larger amount of moments that manage to tug at your heartstrings. The screenplay is just so good at establishing the unique psyches of Laura and Charles and how those individual personalities impact Wolverine, you can see why he acts the way he does around Xavier or why he's reluctant to take on the responsibilities of helping Laura on her journey. The Wolverine we see in this movie is a fragmented man, one whose been browbeaten by the world around him. He's nut just considering given up, he's left the world that's beyond his liquor cabinet ages ago.

Given the challenge of handling a darker iteration of a character he's played for seventeen years now, Hugh Jackman absolutely excels in his final turn as Wolverine. The way he composes himself physically for this part in terms of portraying how constantly in pain Wolverine is (his noteworthy healing factor is starting to slow down as the plot begins) are especially noteworthy, helping every punch he received in the action sequences feel like they're landing with a real sense of impact. Plus, he bounces off his co-stars extremely well, particularly Patrick Stewart, who may just be the best part of the movie altogether. Stewart handles the mentally deteriorating Xavier (whose suffering from a mental disorder not dissimilar to Alzheimers) in an extremely delicate manner, never using his characters unusual state of mind as an excuse to go over-the-top or exploitative.

Instead, right from his first scene in Logan, Patrick Stewart is handling his characters debilitating mental state with grace, wringing real tragedy out of seeing a fictional character once so regal and strong being so mentally hindered by his own mind. Similarly, supporting players Stephen Merchant and Boyd Holbrook (the latter of whom seems to be having a ball playing a gloriously evil Southern-accented cyborg baddie) also deliver indispensable performances and though I seriously wish his character had more meat on his bones in terms of personality, Richard E. Grant does turn in fine work as a villainous scientist.

Now, it's worth mentioning the areas that give Logan an R-rating, a facet of itself that is indeed quite unique for a major American comic book movie. There's a handful of more over-the-top moments of bloody gruesome violence that don't quite gel with its more meditative nature, namely parts like where Wolverine notes how taking the lives of anyone, including overtly bad guys, keeps him at night, which feels slightly at odds with separate moments like seeing an evil henchman's decapitated head rolling around that are obviously supposed to elicit cheers and utterances of "HELL YEAH!!" from the audience. There's some undeniable dissonance there, but luckily, that only crossed my mind in a handful of the more gratuitous violent bits. Otherwise, the R-rated action is quite well-done and the writers and choreographers are obviously relishing the chance to unleash those claws of Wolverine's in more bloody circumstances. Can't say I blame 'em for feeling that way since the blood-soaked carnage Wolverine dishes out is typically quite exhilarating to see.

It's also nice to see that Logan takes it's more mature MPAA rating as not just a chance for blood and a brief snippet of female nudity, but also an opportunity to really examine the wounded nature of its protagonist. "Realism" is not just a superficial aspect for Logan, it's something that it takes to heart, it sincerely wants to explore what it's like to be a super-powered individual whose powers are winding down and whose mortality is becoming all the more present. Logan does not derive its darkness simply from splashing some grey into its color grading, rather, it wants to utilize a more grim narrative as a way to explore the late years of its lead character. Of course, it helps that there is some mild fun to balance out the pervasive darkness, such as in humorous moments between Wolverine and Laura as well as some cute world-building like how X-Men comics exist in the universe of Logan. That detail involving mutant-based comic books is a great example of the kind of thoughtfulness that permeates Logan, a darker take on its lead hero that more than justifies its grim tone with a dramatically engrossing tale of mortality, pain and the glimmer of hope that can be found in the future.
Posted by Douglas Laman (NerdInTheBasement) at 10:15 AM