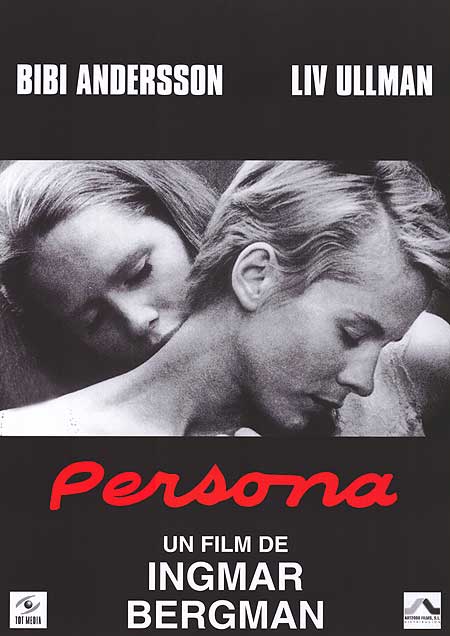 Let it never be said that Ingmar Bergman does not start off his movies in a manner reminiscent of the immortal Smash Mouth lyric "...hit the ground running." The very first scene in Persona is an abstract compilation of seemingly unrelated footage playing off, some of it grisly, some of it silly, before we see a nameless character emerge from a hospital bed and approach a giant screen. Then the opening credits start up, kicking off the plot proper. Once that was all over, I kind of just had to pause for a moment and figure out what on Earth I had just watched. The fact that the film itself just casually goes about its business after that perplexing opening sequence. Okee-dokee, I guess that's the kind of motion picture I'm in for?

The actual story Persona deals with concerns a nurse named Alma (Bibi Andersson), a woman whose been tasked with caring for a renowned actress named Elisabet Vogler (Liv Ullmann). Elisabet is refusing to speak with anyone, instead confining herself to a room where hse's separated from the outside world, including her own husband and child. In order to help her break out of this condition, Alma decides to take care of Elisabet in a remote cabin by the sea, where it'll just be the two of them as she tries to coax Elisabet back into engaging in more conventional communication habits. In their time spent together, the two become extremely close, with Alma particularly using her time spent with Elisabet to confide in her about some closely-guarded secrets from her past.

If you think a nice piece of serene living can last long, well, you'd be wrong, as conflict soon emerges between the two, as Elisabet turns out to be far less trustworthy than you can imagine. I do wish the time spent with these two as completely close friends was slightly elongated, since it does feel like they go from being pals to confrontational foes in an extremely quick manner. More time spent cementing their newfound empathetic affection for one and other could have made the singular moment where deceit on the part of Elisabet leads to things spiraling out of control having more emotional impact.

That having been said, Persona is otherwise a taut and incredibly engaging exploration of both the concept of betrayal and trust. Ingmar Bergman, who assumes duties as both writer and director of this project, creates quite the superb screenplay that finds success in utilizing both visual storytelling and dialogue-reliant storytelling. For instance, there's the avant-garde opening sequence alone that thrusts the viewer immediately into an indiscernible world of chaos without the aid of dialogue while later scenes of Persona, such as when Elisabet sneaks into a snoozing Alma's room, help emphasize the level of closeness between these two individuals that has been subtly developed in the story up to that point.

Meanwhile, the dialogue-heavy portions of the movie have a similarly engrossing nature to them. Bergman's script provides Bibi Andersson with plenty of opportunities to deliver thrilling monologues that let both the viewer and Elisabet a chance to peer into the vulnerability of Alma. I love how Bergman is not afraid to embrace both subtle and non-subtle storytelling with such skill, since both types of storytelling can be so effective when utilized properly (you can also see that level of varied storytelling in his masterwork The Seventh Seal). Wavering between two types of storytelling also gives the motion picture a subtly unpredictable feel to it that matches the uncertain scenario both Alma and Elisabet have found themselves in.

Liv Ullman gets significantly less dialogue to work with, but that doesn't mean she comes up short with the quality of acting she presents here, good Lord no. Her blank stare alone is haunting, conjuring up so much agony with just one look. It was a terrific coup getting Liv Ullman for this part, since a character so reliant on facial mannerisms and body language like Elisabet required an actor so fluient in such non-verbal acting traits to make it work, which is certainly an apt description for Liv Ullman. Together, Liv Ullman and Bibi Anderson headline Persona, a tremendously sorrowful tale that excels thanks to the merging of a strong screenplay and two incredible lead performances.