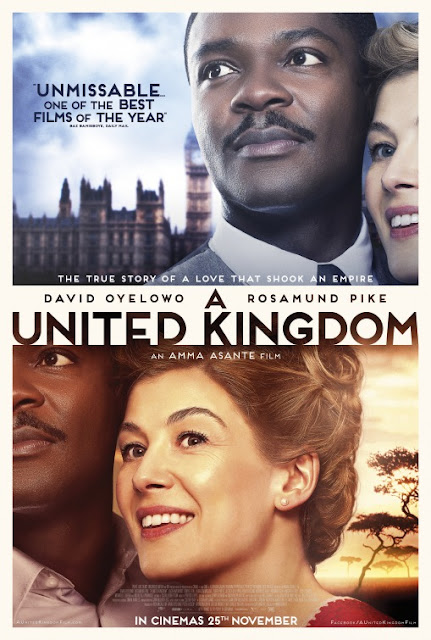 No romantic relationship comes without its own set of hurdles, and for many individuals in society over the ages, such struggles go well beyond "communication difficulties" or similarly mundane ordeals. Same-sex couples and interracial couples particularly have found a great amount of strife in attempting to have the same marital rights as white heterosexual couples. For the two lead characters in the romantic drama A United Kingdom, the complications associated with interracial couples in the late 1940's are further complicated by the fact that one of the two individuals is the prospective king of Bechuanaland.


That King in question is Seretse Khama (David Oyelowo), a man whose studying in London when he strikes up a relationship with Ruth Williams (Rosamund Pike), a Caucasian woman who immediately takes a liking to Seretse. Before Seretse heads home to take up his duties as royal ruler of his home, he asks for Ruth's hand in marriage. While this bring Ruth and Seretse joy, such an arrangement drums up plenty of controversy on the world government stage, including those in Bechuanaland (like the current ruler, Seretse's Uncle) and highly powerful individuals in South Africa and the United Kingdom.

A United Kingdom is very much in the realm of crowd-pleasing dramatic fare, which tend to detour into grating schmaltz at the expense of depth. Frankly, it's easy to see how this story could have delved into the darker topics of oppression it only skirts at the edges of (an outbreak of Malaria, for instance, gets concentrated on for one brief tonally darker scene before oddly never returning or factoring into the rest of the story), but at the same time, the end result is pleasing enough that it's hard to quarrel too deeply at its lighter atmosphere, especially since it does do a fine job of being even-handed in terms of exploring how this situation is affecting both of its lead characters.

That's actually the aspect that stands out the most to me about A United Kingdom, is how well it conveys individual struggles and triumphs for both Seretse and Ruth. They both get equal opportunities to lead this story, which means you get to understand their own distinct plotlines more as well as get a better sense for why they gel so well together as a couple (that latter element is further helped by the solid chemistry between the two lead actors). Plus, by allowing both Ruth and Seretse to be equal lead characters, it allows the actors playing them plenty of chances to really shine and make ample use of their individual talents.

David Oyelowo, for his part, has solidified himself for me (between this movie, Queen Of Katwe and Selma) as a commanding presence who can also be an easygoing everyman you'd love to chit-chat with, while Rosamund Pike gets her first post-Gone Girl role here that proves we really do need to see her in more movies. Pike does a great job of showing Ruth's struggle of adjusting to the heightened politically-fraught scenarios she's been forced into while also allowing the characters determination-soaked persona to seep through, a solid mixture of vulnerability and resilience that Pike handles mightily well.

Both of these two lead actors are working under the direction of director Amma Asante, who does solid work behind the camera, there's not a ton of bold choices found in the shot composition or framing of shots. Even when playing it safe in that department, and even diving into some clunky editing from Jonathan Amos (there's a cut from Seretse flinging papers off his desk to a wide shot of an automobile that took me right out of the movie), A United Kingdom is able to be a charming romantic drama that uses some strong performances and a script that allows for both of its lead characters viewpoints to be seen, resulting in a motion picture with an endearingly sweet spirit.
Posted by Douglas Laman (NerdInTheBasement) at 8:42 AM