Logan Slices Up Fourth Biggest R-Rated Opening Weekend Of All-Time While Moviegoers Have Faith In The Shack At The Box Office, Before I Fall Tumbles And Table 19 Is Empty 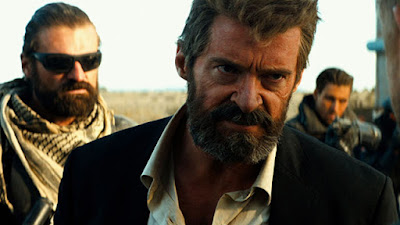 Credit must go to 20th Century Fox for putting together a splendid marketing effort for this one that separated Logan from past Wolverine and X-Men fare by emphasizing a melancholy tone with a definite emphasis on the finality of this entry. It doesn't hurt that the feature got the best reviews for any X-Men movie in history and was the first big blockbuster of the year. Budgeted on only $97 million, this one's gonna make plenty of easy money for 20th Century Fox and sets the stage for a surprisingly large amount of high-profile R-rated action movies still to come in 2017 that a number of differing studios hope will have the same level of success seen by recent R-rated blockbusters like Kingsman: The Secret Service, American Sniper, Mad Max: Fury Road, Deadpool and Logan. Some of these titles include Alien: Covenant, Blade Runner 2040, Dunkirk and I think The Dark Tower is also gonna be R-rated?

Logan is gonna face a bunch of competition in the weeks to come but it's R-rating and strong word-of-mouth should keep it as a notable presence in the marketplace. It should have no problem cracking $200 million, becoming only the fourteenth R-rated movie in history to crack that mark! For now, I'll say it does 2.5 times its opening weekend and grosses $215 million domestically, which would handily make it the biggest solo Wolverine movie. We shall see if that projected final domestic cume was too rosy or small in the weeks to come.

Showing incredible stamina for any movie, let alone a horror film, Get Out went down a tiny 22% for a $26.1 million second weekend. Get Out has now grossed exactly $76 million domestically and is obviously now guaranteed to crack $100 million domestically. Honestly, the sky's the limit for this one in terms of how high it'll go at the domestic box office, a truly remarkable feat that's very much a testament to the strong word-of-mouth surrounding this particular horror film.

$16 million was spent on The Shack this weekend, the seventh biggest opening weekend ever for a Christian movie. That's actually a pretty solid number that can be attributed to the popularity of the book it's based on. Unless it falls off on a cliff in the days to come, it's likely The Shack crosses $50 million domestically, becoming only the fourth movie Sam Worthington has appeared in that's crossed that mark ever since he starred in the biggest movie of all-time (Avatar). Also worth mentioning is that The Shack continues the hot streak Lionsgate has been on lately, with recent hits like The Shack, Boo! A Madea Halloween, Hacksaw Ridge, John Wick: Chapter 2 and especially La La Land have given the studio some of its best box office results ever, proving that there indeed can be life for the studio after The Hunger Games. They're likely hoping that streak continues in three weeks with their big-budget gamble, a big-screen revamp of the Power Rangers.

Despite zero new competition in the way of family movies, The LEGO Batman Movie went down 39% in its fourth weekend, an only OK decline that meant to gross another $11.6 million, bringing its domestic cume to $148.6 million. Looks like this one will end its domestic run in the area of $170-175 million, a decent but under expectations total (it doesn't help that it's outright bombing in numerous key overseas territories).

Before I Fall rounded out the top five with only $4.9 million, an underwhelming start for the movie even considering its tiny $5 million budget. That debut puts it way on the lower end for Young-Adult Novel Movie Adaptations, even coming in 2% behind the $5 million debut of The Outsiders from 1983. It'd be shocking if this one got above $12 million domestically, especially since the far more high-profile Beauty & The Beast will be taking away audiences searching for romantic fare in two weeks.

Holding alright in the face of Logan was fellow R-rated action movie sequel John Wick: Chapter 2, which went down 49% to gross another $4.7 million, bringing its domestic total to $82.8 million.
Even with the Academy Awards having come and gone, Hidden Figures is still adding up money as it grossed another $3.8 million (a 34% dip from last weekend), bringing its domestic total to $158.7 million. That means, out of 20th Century Fox's 2016 releases, the $28 million budgeted Hidden Figures has outgrossed the studios $178 million summer blockbuster sequel X-Men: Apocalypse. Of course, despite that obvious math, we all know what movie Fox will be imitating more often in the future.

The Great Wall felt the presence of Logan mightily collapsing 61% to gross another $3.5 million, meaning its now grossed only $41.2 million. Looks like this one won't even get past $50 million domestically. Taking in another $3.4 million this weekend was Fifty Shades Darker, which has managed to gross $109.9 million domestically. Momentary Best Picture winner La La Land eased down 37% to add $2.9 million to its domestic gross that now stands at $145.6 million.

Expanding into its wide theater count ever after a Best Picture win was Moonlight, which went into 1,564 theaters and grossed $2.5 million as a result. That it's biggest individual weekend ever and means it's now grossed $25.3 million domestically. Sometime tomorrow, it'll surpass the $25.4 million total of Ex Machina to become the biggest movie ever for studio A24. I imagine Moonlight will now settle at a domestic total just north of $30 million. Meanwhile, in its second weekend Rock Dog went down 40% to gross another $2.2 million. This animated family movie bomb has only taken in $6.6 million in 10 days.

Believe it or not, a new Anna Kendrick comedy opened this weekend, it's called Table 19 and it opened to only $1.5 million this weekend at 868 theaters for a per-theater average of only $1,815. Not really shocking this one opened so low because there was so little marketing for it. This serves as the lowest wide release opening weekend ever for Anna Kendrick, dethroning the $8.6 million bow of 50/50 for that honor.

Expanding into 271 theaters this weekend was A United Kingdom, which held OK in its expansion by grossing another $625,000 for a per-theater average of $2,306, bringing its domestic total to $1.8 million. A major record got broken this weekend by Collide, which experienced the largest second-weekend drop of all-time. It dethroned the 86% plunge of Undiscovered (which previously held this record for over a decade) for this dishonor. Collide went down 87% to gross only $194,236 in its second weekend. In ten days, Collide has only grossed $2.2 million. Finally, The Last Word debuted in limited release to underwhelming numbers, grossing only $35,620 at 4 locations for a per-theater average of only $8,905. That gives it the lowest opening weekend ever for studio Bleecker Street.

The Top 12 movies this weekend grossed $168 million, the biggest ninth weekend in history for any given year. It's also the fourth biggest weekend ever in March. With titles like Kong: Skull Island, Beauty & The Beast, Power Rangers and The Boss Baby on the horizon, this likely won't be the last time loads of cash are made at the box office in March 2017.
Posted by Douglas Laman (NerdInTheBasement) at 5:01 PM