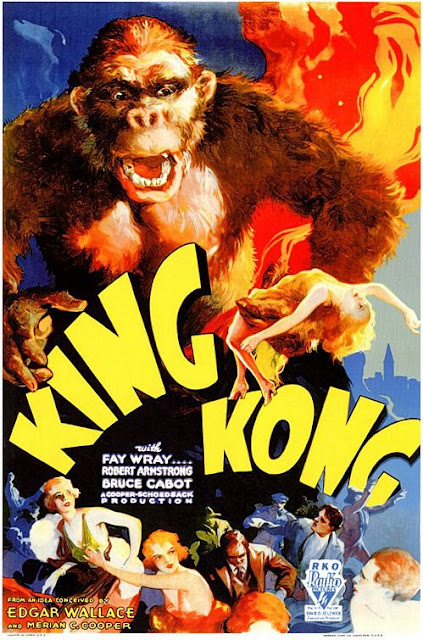 The trailers for the new King Kong feature Kong: Skull Island have come with a tagline that simply reads "We Don't Belong Here". It's an eye-catching phrase that stuck out in my mind throughout watching the original 1933 version of King Kong for the very first time, as it's very much true in relating to both the group of human beings who travel to a mysterious island and for the titular ape when he's brought to civilian surroundings in the third act. Before all of that occurs though, a number of sailors, cameramen and a lone actress, Ann Darrow (Fay Wray) set out to sea under the guidance of famous director Carl Denham (Robert Armstrong).

They're all traveling to an unknown location called Skull Island where Denham hopes to film his next smash hit movie. Unfortunately for the crew, this place turns out to be far more ferocious than they expected, with the islands native inhabitants, after a brief first meeting the foreign crew, kidnapping Ann and handing her off to a giant gorilla named Kong that serves as their deity of sorts. Dunham leads an expedition into the island's jungle to retrieve Ann, fighting off a horde of dinosaurs and Kong himself in the process of the rescue mission which also costs the lives of a number of the men on the voyage.

What transpires from there turns out to be one of the most acclaimed monster movies of all-time as well as one of the most influential motion pictures of the pre-1940 era and for very good reason. Just on a technical scale alone, King Kong is a truly incredible achievement. King Kong may be a monster movie through and through but it doesn't utilize a budget or scope that would be inhabited by the B-movie subgenre in the 1950's and 1960's where most monster movies occurred. Instead, it's got plenty of lavish sets that allow the scale of Skull Island to come through intact as well as plenty of stop-motion effects utilized to bring the various dinosaurs (including carnivorous dinos now known as plant-eaters) to life.

And then, of course, there's the effects used to bring Kong himself to life. Doing a modicum of research has led me to discover that Kong is entirely a stop-motion model, an incredible achievement on the part of sculptor Macel Delgado. Kong moves on-screen in a smooth manner that, even 84 years after its release, immediately makes you believe, like the best special effects, that what you're seeing is something real, something you immediately invest in. In terms of the creatures movements, that's where further genius can be discovered, as there's a remarkable job done in giving Kong a wide variety of subtle pieces of body language that make him feel like a real animal, such as when he's batting his hand around in a cave Carl Denham is hiding out in or when he's fiddling with the jaw of a T-Rex he just killed in order to make sure the monster is truly dead.

Keeping a very clear example of his animal instincts intact in the stop-motion figures performance turns out to be a great way for the average viewer to connect this big beastie with the smaller beloved apes in the real world. The individuals behind all of the creature effects have also made the extremely smart decision to make Kong smaller than many of the other creatures he fights with on the island. This way, he always visually appears to be the underdog in these battles, you can't help but root for him to overtake his larger opponents. On a sidenote, the various dinosaurs on the island, while not scientifically accurate in terms of what certain members of this species are similarly stellar examples of stop-motion wizardry.

Kong may be the movies absolute stroke of genius, though he's not the only area of the movie that manages to excel. The script itself is incredibly well-paced (especially when compared to the incredibly slow pace of the 2005 Peter Jackson remake), building up a sense of mystery around Skull Island slowly while not tripping up and becoming lethargic. Once the monster mayhem begins, the screenplay does a splendid job just continuously coming up with new dangers for the crew to encounter without it coming off as repetitive. Instead, the sense of menace lurking behind every corner is constantly maintained, helped by the aforementioned high-quality stop-motion animation used to bring the various creatures on Skull Island to life.

But now, let us come to the part of King Kong that truly stood out to me, a true accomplishment given how amazing the feature is as a whole. I am, of course, referring to the ending, the one we're all familiar with whether we've seen the actual motion picture or not. Now, I have seen more pop culture parodies of the ending of the 1933 King Kong movie than I can comprehend, and yet, watching that actual sequence in its original context hit me like a ton of bricks emotionally. What these numerous parodies never show is the aforementioned myriad of subtleties in Kong's performance that make him such a lovable creature, one who you don't want to see get hurt. The exquisite work that's gone into giving the stop-motion animation of Kong has been so thrilling the entire ride up to this point but now the tiny nuances found in the stop-motion animation are used to create some emotionally devastating bits of acting from the mammoth ape.

For instance, there's this small moment right after Kong first gets shot by one of the planes on the Empire State Building, and it just rocks you to your core. He looks down on his blood soaked hand, and it suddenly sinks into him....this is it. He's not getting out of this. He's ascended to the highest peak in all the city and he's still not gonna be able to escape. The mortality of a beast once hailed as a God-like creature has been cemented. The next few minutes that follow this subtly powerful moment are dialogue-free actions from Kong that just rip out your heart as he touches Ann one last time, tries to fight off the planes....and finally crumbles to the ground. It's a tragic sequence that had me teary-eyed, a beautiful melancholy ending to a similarly spectacular movie. No matter how many parodies of that sequence have been made or will be made in the future, they'll never diminish the incredible subtlety-driven emotional power of that climactic scene.