Neither Bird Nor Plane, Superman Is Just An Insanely Charming Movie 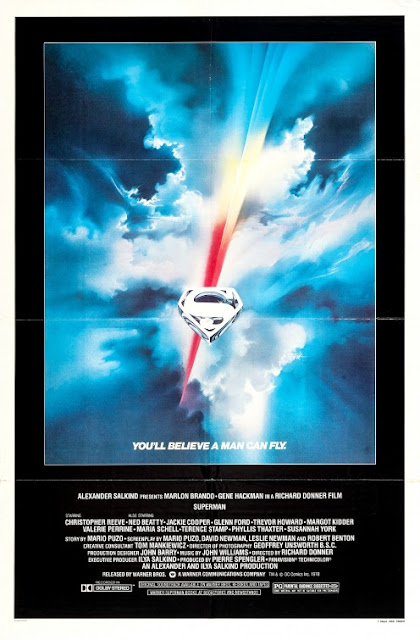 Us superhero movie geeks owe more than a bit to 1978's Richard Donner feature film Superman. Prior to this movie, superheroes had been relegated to forgotten TV movies, serials, a handful of Zorro movies and a single theatrical movie based on the 1960's Adam West Batman TV show. Though it would take another decade (with Tim Burton's Batman) before another non-Superman superhero movie would find similar success, this iteration of Superman had opened the door for other costumed characters to enter multiplexes across the world and tell their heroic tales in a larger-than-life visual medium.

Watching it now, 39 years after its release, it's interesting not only how downright charming Superman is as a movie but also how different it feels from its contemporary brethren. The feature goes through the origin phases of its titular character in slower ways that build up a sense of grandeur, which is in stark contrast to the more fast-paced manner in which modern superhero movies are edited and executed in. Some of this slower-paced content (namely the sequences taking place on Krypton, which do drag a bit) take some getting used to, but it's a unique approach that does work when it needs to, namely in the subdued and surprisingly gut-wrenching demise of Superman's Earth father, Johnathan Kent.

After all of these introductory proceedings are out of the way, Superman has a conversation with a video message from his space father (played by Marlon Brando) and, presto! He's off officially as Superman, complete with that world famous superhero outfit! From this point onward, the film envelopes itself in the traditional mythos of the character with a loveable earnest quality. One or two rib-pokes at original staples of the character emerge (it amuses me that they explicitly mock the idea of Clark Kent changing into his Superman attire in a phone booth in 1978) but the material is treated in a respectful and cheerful manner that's necessary to make this character work at all.

Much praise has been written on just how good of an actor Christopher Reeve is in the dual roles of Clark Kent and Superman and I can guarantee you all of that ballyhoo is very much richly deserved, Reeves is impeccable as the Man Of Steel. When he's Clark Kent, he makes the awkward out-of-place geek persona not only humorous but immediately sympathetic, while he's able to play off the Superman side of the character with natural charisma and charm. There's a constantly likeable air surrounding Reeve no matter what identity he's inhabiting, a key quality for any soul who has been tasked with portraying this specific superhero.

Similarly fun whilst playing an iconic character is Gene Hackman in the role of Lex Luthor. I wouldn't have minded more screentime for him, but he's a hoot as the self-proclaimed "criminal mastermind of our time". It's worth mentioning what Lex Luthor lacks; some sort of tragic backstory to inform his character. He doesn't carry around deep-seething daddy issues or an inferiority complex or what not; he's Superman's most notable nemesis in the comic, ergo, he's going to be the villain in the movie, so Superman, as a film, just hits the ground running with Lex as an already functioning antagonist.

Just rolling with the enduring source material is one of the best traits of this 1978 take on Superman, a superhero movie that set the standard for its subgenre and opened the door for other comic book caped crusaders to fly onto the big screen. Even its flying effects still look solid today. Yeah, there's the occasional bit where they look phony, but at least it's always a real human being being superimposed onto backgrounds compared to the fake-looking CGI Superman that's flying around in the likes of Man Of Steel. That human touch is a key reason why Superman still manages to soar after all these years.
Posted by Douglas Laman (NerdInTheBasement) at 7:42 AM