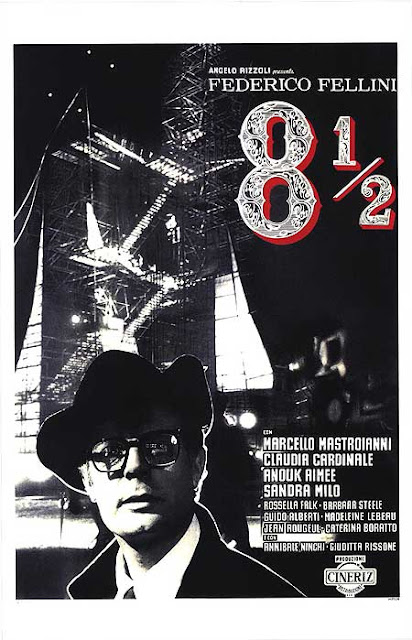 Upon doing some internet-based research on director Federico Fellini, I stumbled upon this quote of his that says "All art is autobiographical; the pearl is the oyster's autobiography.". It's a surprisingly profound thought, wrapped around an easy-to-understand comparison that drives the entire point of the statement home. Art does tend to reflect the inner workings of its creators, their ideas, their ambitions, their viewpoints on the world they inhabit. That's what makes exploring art so much fun from an analytical perspective; it's incredibly exciting to probe idiosyncratic artists and the art they create to express their innermost thoughts.

For Federico Fellini's 1963 feature film 8 1/2 though, the above quote takes on a whole new meaning, as the entire film, including its lead character, seems to be speaking in autobiographical terms about its director. 8 1/2 basically serves as a full examination on the heavily revered filmmaker handling the project, particularly in regards to the lead character, a director known for splashy esoteric films who seems to be a stand-in for Federico Fellini himself. It's an incredibly honest, raw film, one that had me lost in its transcendent imagery and its brutal and honest take on aching loneliness. If I had to describe the movie in a singular sentence, I would simply not that 8 1/2 is a phenomenal thoughtful unique masterpiece. But such few words alone do not do justice to the level of brilliance at work here.

Famous filmmaker Guido Anselmi (Marcello Mastroianni) is putting together the finishing touches on what will become his next motion picture. It's a grandiose endeavor, one full of expensive sets, loads of actors, flashy costumes and the like while it's also chock full of people reminding Guido to reign in his more esoteric qualities as a filmmaker and also questioning why his movies haven't had strong love stories in them. All the while, Guido is still trying to figure out what this movie is even going to be while grappling with a crumbling marriage and constant reminders of tortured memories from his past he'd rather not revisit.

Right from the start, 8 1/2 is already pretty entertaining, with engaging dialogue, strong choices for classical music playing in the background and the actors all have a strong rapport with each other. Federico Fellini also carries over his ability to constantly keep coming up with new and unexpected story elements in an organic fashion from his 1960 motion picture La Dolce Vita, which leads to plenty of surprises and fun segments such as Guido encountering a telepathic magician at a big party. But as the movie goes on, darker story elements begin to crop up and the feature takes on a more weary, aching, broken tone that becomes simply engrossing and gives a whole new dimension to all of the sequences that preceded it.

As we dig deeper and deeper into what exactly makes Guido tick and why he acts the way he does, we learn that he's a man whose soul is empty, whose entire life has been spent treating women as objects defined by their age, physical appearance and what they've done for him lately, rather than treating them like human beings. Even as a younger kid, the seeds were being planted for how he'd treat women by the way he and his buddies would pay a lady on the beach to dance for them for their amusement. This way of living, of treating those around you as merely objects to satisfy your own desires, gives him brief fleeting glimpses of joy but soon the emptiness comes back. That's why he keeps moving on from woman to woman, much to his wife's understandable chagrin.

In the middle of his newest movie, the emptiness in his being is looking to engulf Guido, as the emptiness of his life and relationships begins to weigh heavy upon his soul, leading to an elaborate fantasy sequence wherein all his past lovers live with him in a housing complex that puts a strict system in place regarding how people can live in certain parts of their based on their age. In describing it, 8 1/2 may sound like something that could crumble into a highly stylized exercise in repetitiveness but it's actually an incredibly powerful exploration of one's man inner loneliness. 8 1/2 is not looking to make excuses for this guy's behavior, the dude really is a jerk for refusing to treat any woman he comes into contact with as an actual person. But it also recognizes the tragedy that informs this persona, one that the film manages to wring an incredible amount of engrossing sadness out of since it goes all-in on depicting Guido's psychological condition as ever worsening.

Over the course of 8 1/2, it becomes readily apparent that Guido is becoming more and more susceptible to the emptiness in his soul and the way Federico Fellini manages to visually depict this through numerous avant-garde stylized sequences is mesmerizing to witness. This type of absorbing storytelling gets established early on in a scene where Guido communicates with the spirits of his deceased parents, a quietly somber and tragic moment whose every shot, every piece of dialogue, every piece of blocking, all of those elements more than add up to create something that immediately stands out as a unique and truthful depiction of coping with emptiness you know you will never be able to fill. Here, it is the emptiness surrounding his fractured relationship with his parents, just one personal relationship Guido has been unable to properly manage.

This type of internal struggle is one 8 1/2 does not utilize lightly. It treats this intense subject matter with grave seriousness and a level of insight that makes me wonder if Federico Fellini's similarities to Guido did not stop at the characters occupation as a director of unusual movies. Fellini utilizing his trademark use of unconventional abstract storytelling to tell a tale of one man's internal woe results in something truly magnificent, the kind of movie where you can feel the aching of the lead character transcend past the screen and into your own body. It's an incredible film that becomes an experience unto itself, one that gets only more and more riveting as it goes along. It's like I said earlier; 8 1/2 really is an outright phenomenal motion picture.

Posted by Douglas Laman (NerdInTheBasement) at 11:26 AM