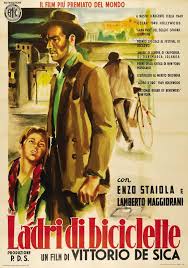 Right from its opening scene, Bicycle Thieves has a remarkable talent for plunging the viewer into the desperation soaked world its lead character lives in. Dozens of human beings crowd around one man whose handing out job assignments, with all of these people eagerly hoping they can get an assignment that'll ensure they and their families will be able to eat in the coming days. Their entire lives hinge on one human being, this guy assigning people to certain tasks. It's insane to imagine one's fate being solely determined by a singular person, but that's very much the reality for all of these people.

Antonio Ricci (Lamberto Maggiorani) seems to have gotten a lucky break though. He's been given a paid job that only requires him to have a bicycle. Without that specific form of transportation, there's no way he can have this crucial job. Once he goes through the complicated process of retrieving his own bicycle, all seems well financially for the moment, but of course, few things in life stay serene for long. While working, Antonio's bike is stolen by a rapscallion youth. Terrified at the prospect of losing his job and putting himself and his family in financial jeopardy, he and his son, Bruno (Enzo Staiola) set off to get that bike back.

If there is one word to describe Bicycle Thieves, it's desperation. That aforementioned opening scene is wallowing in that particular state of being, there is a pervasive sense of desperation consuming the lives of these people hungry for any sort of job. As Antonio travels around Rome looking for his bicycle, we see further examples of people just trying to get by and survive in their meager lives. An uncooperative man in a marketplace whom Antonio is worried may have stolen his bike is obviously living in less than posh circumstances while the mother of a youngster whom Antonio later is convinced did indeed steal his bicycle is living in a home that can only be described as an incredibly small and dingy domain.

Bicycle Thieves is all about the little people trying to get on with their lives and the lengths to which they'll go to ensure their meager livelihoods remain intact. As the search wears on over the course of the day, Antonio becomes increasingly fraught, even hitting his own son, Bruno, at one point. By the end of the story, he's off trying to steal another man's bicycle too, becoming the very sort of common thief he's been attempting to find and stop all day long, crushing his son's spirit in the process. It's a classic case of going too far to protect yourself and your loved ones, a tragic situation that I'm sure was not unfamiliar to many denizens in the uncertain post-World War II era of Rome, Italy in which Bicycle Thieves takes place in.

This all means that not only does Bicycle Thieves fit perfectly into the Italian neorealism subgenre (a sector of cinema that the director of this movie, Vittorio De Sica, was a major pioneer in), it lends fascinating insight into how the citizens of Italy were coping economically and psychologically in the fully revamped world that emerged in the wake of World War II. You can totally feel the pervasive sense of uncertainty that was felt all over this country in this era in the both the writing and acting of this movie's lead character, Antonio Ricci, a guy whose growing desperation to gain his bicycle (and by proxy, his families financial security) back is played off in a beautiful and emotionally devastating manner by Lamberto Maggiorani.

What really helps seal the deal on the themes of weariness and unpredictableness is its final shot, which ends things on an appropriately somber note as both Antonio and Bruno (the former individual being consumed by guilt and sorrow over his son seeing him as a thief) fade into the crowd, their worries and concerns becoming only another indistinguishable part of a crowd filled with such agonizing contemplations. There are no easy answers to be found for our two leads, just as there weren't any easy answers or solutions to be found for so much of the population of this country in this post-World War II era. Yes, that large-scale war may be over, but for Antonio and Bruno, every day now is its own personal battle to keep a roof over their own heads. Probing those extremely real notions of financial insecurity in such a fascinating way makes Bicycle Thieves such a harrowing and impeccably mournful motion picture.
Posted by Douglas Laman (NerdInTheBasement) at 10:46 AM