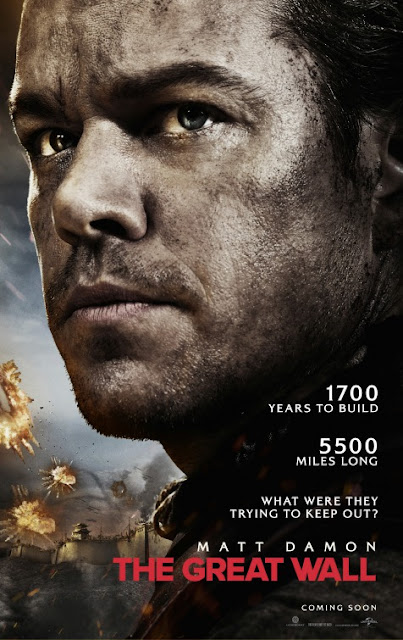 For those hoping The Great Wall turned out to be a big-budget misfire diamond in the rough ala the highly underappreciated John Carter, alas, it is not. For those curious if The Great Wall is a big budget colossal failure like Batman v. Superman: Dawn Of Justice or The Last Airbender, it is also not fitting of that description. Instead, what we get here is a mostly boring result of being merely a forgettable motion picture with decent production value found in the myriad of colorful costumes and some actually decently well-designed monsters while its scattershot script lets those positive elements down big time.

As some opening on-screen text proclaims, many legends exist concerning the real-life Great Wall Of China. The Great Wall proceeds to depict an (as far as I know) entirely newly created story about some Western travelers, William Garin (Matt Damon) and Pero Tovar (Pedro Pascal), accidentally finding themselves embroiled in a war between Chinese soldiers and ancient monsters, which are kept out of China by the massive Great Wall Of China. Though William at first merely wants to steal some "black powder" (a term used to refer to gunpowder), go off, sell it and use that money to buy a zoo, he soon becomes invested in this battle against the monsters that could determine the fate of the world.
There are some elements of The Great Wall that are eye-catching to be sure, namely the attire adorned by the Chinese soldiers fighting back against hordes of ferocious monsters. All of these soldiers have these sets of armor that are coated in super bright and visually pleasing colors that make their visual appearance pop. There's a similarly color-oriented approach taken in some of the sets (namely the bright yellow throne room of the Emperor) that help give The Great Wall its own colorful visual identity that ensures that even vast swathes of desert carry some pink and green in their sandy exterior.

But a splashy coat of paint cannot make a car without a functioning engine run properly, and similarly, the splashy sets and costumes cannot make up for the fact that so much of The Great Wall is honestly just tedious. That seems to be because the movie chooses to center on William Garin, a character whose honestly kind of a failure as a protagonist in a major blockbuster. He's not fun to watch in terms of his screen presence or the action stunts he does and his character arc is concluded long before the movie hits the halfway mark. He's a guy whose fought for many different people over the years with no direct loyalty to anyone but money, so of course, finding these Chinese soldiers fighting against an army of monsters has him reconsidering his stance as a roamer and he learns to be more cooperative.

That's not an inherently awful idea for a character I suppose, but like I said, it goes by far too quickly to leave much of an impact and Matt Damon's acting does an awful job of conveying his character transformation. In his reformed state, he acts and talks just like he did before. To boot, William is caught up in a subplot concerning himself, Pero and another foreigner (who gets minimal screentime yet is bizarrely played by Willem Dafoe) trying to steal "black powder" from the Chinese soldiers. This subplot takes up so much of the film and not only doesn't challenge William or his allegiance to the Chinese soldiers greatly, it takes up screentime that could have been spent on more monster mayhem.

But nope, we've gotta watch William and Pero bicker back-and-forth in dingy dungeon-like areas talking "black powder" for what seem like eons. All the while, Matt Damon is just waltzing in between accents for no apparent reason and Pascal is stuck playing a sub-Jack Sparrow untrustworthy rogue routine. They're such snoozers of lead chaarcters here who serve as merely distractions from brief flashes in The Great Wall that seem to hint at a much better movie than this one. You'd think a feature film with such an off-the-wall starting concept like this one and such lavish visuals could have a protagonist who's at least mildly interesting, but instead, we've got a lead character whose dull as dishwater, removing any sense of energy from the boilerplate The Great Wall, a motion picture that's far more forgettable and boring than it really should have any right to be.
Posted by Douglas Laman (NerdInTheBasement) at 12:05 PM