Journey To A Captivating World In Pan's Labyrinth 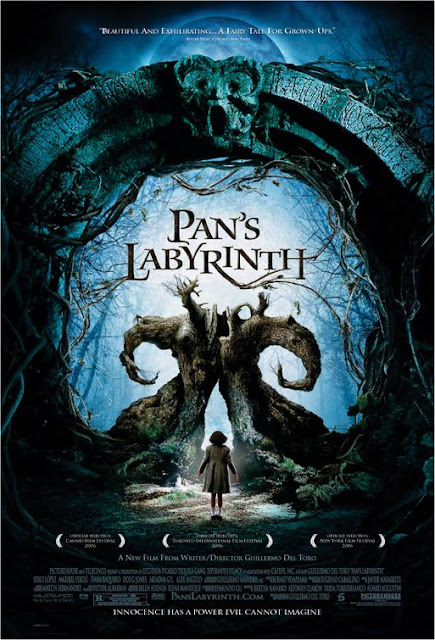 Despite being a massive Guillermo Del Toro fanboy, I've never seen his 2006 feature film Pan's Labyrinth before, which I suppose is akin to being a massive fan of The Beatles while thinking Abbey Road is solely a road in London. Anywho, sitting down to watch this one was a fascinating experience in terms of placing it in the larger picture Del Toro's filmography, as his later films would carry over certain elements of Pan's Labyrinth, such as a period era setting that plays heavily into the story (Crimson Peak) and the heavy use of mythic fairy tale characters (Hellboy II: The Golden Army). It's apparent that the experience of Pan's Labyrinth left a profound impact on Guillermo Del Toro as a director.

That's an entirely understandable outcome from my vantage point since, truth be told, Pan's Labyrinth left a pretty noteworthy impact on me too. This is the kind of film where all I want to do in my review is babble off incoherent hyperbole as I try to form sentences worthy of the glorious work I have just witnessed. Allow me to deny that type of impulse and instead attempt to create some more cogent analysis of Pan's Labyrinth. The plot in this one concerns a young girl named Ofelia (Ivana Baquero), whose moving with her pregnant mother to a place run by Ofelia's nefarious stepfather, Captain Vidal (Sergi Lopez).

This Captain Vidal figure is a man whose looking to use Ofelia's mother solely as a means to get a son and is similarly determined to eradicate any Resistance fights still out there in the forest that surrounds his domicile. Set against this wartime backdrop is Ofelia's discovery that she is actually a princess, one who can return to a realm of fantasy her ancestors ruled over if she accomplishes a series of tasks given out by a helpful faun (Doug Jones). These series of adventures offer Ofelia plenty of challenges as the Vidal's search for resistance fighters grows more and more grisly in nature.

Merging the horrors of war with the world of old-timey fairy tales is a combination that suits Pan's Labyrinth so incredibly well. Ofelia's journey to reclaim her throne as princess offers her some form of escapism from the dreary violent surroundings she's been forced into, it allows her to accomplish something in a time where she feels like everything's so out of her hands. Having her journey off on fantastical adventures like a visit to a troublesome toad in a tree or a malicious figure known as The Pale Man (the latter of which is also played by Doug Jones) gives both Ofelia and the audience the chance to escape from the all too real and gruesome horrors of war that Captain Vidal both experiences and instigates.

Guillermo Del Toro's depiction of these fairy tale creatures and their surroundings hews closer to the earliest depictions of fairy tales in that they're creepy, unsettling, darker but very much have morals on their minds to tell children. It's taken as common knowledge at this point that the earliest incarnations of the Hansel & Gretel or Snow White myths were far darker than the more child-friendly iterations that are utilized today and Guillermo Del Toro uses that specific conception of fantasy creatures & worlds to create something that very much has a life of its own visually. Just look at how unsettling The Pale Man is in every way or even how the helpful Faun is unsettling to look at upon first glance.

The fantasy aspects of Pan's Labyrinth can be beautiful or enchanting, but Del Tor imbues a more rugged aesthetic into the appearance of these mystical creations that do indeed harken back ancient darker fairy tales. All of these animatronics and sets used to bring the various fantasy-oriented elements to life are simply stupendous, you could scour over still images of various sets or characters for hours and constantly discover new details in their movement, texture and appearance. So much thought and care has gone into creating this magical world and it pays off handsomely considering the world of Pan's Labyrinth truly doesn't feel like any other depiction of worlds of fantasy I've ever seen in cinema.

There's a similar level of craftsmanship going into the wartime espionage occurring around Vidal's compound, with both a doctor and a helper to the captain being secret spies for resistance fighters camped out in the woods. It's a fascinating plotline that helps show just how dangerous the circumstances Ofelia and her mother are trapped in have become. Not only are sequences devoted to this particular element of the story fascinating to watch on their own but the way they subtly but surely manage to intertwine directly with Ofelia's personal life in the third act is a master stroke of storytelling. The lives of a young girl whose a secret princess and resistance soldiers fighting against a corrupt captain manage to connect in a totally fluid and organic way in the story of Pan's Labyrinth, a truly remarkable feat. Having these two plotlines coalesce in such a satisfying fashion exemplifies just how well Pan's Labyrinth balances out the humanity with the fantastical, a similar balance that made the olden fairy tales that inspired it so popular in the first place.

Pan's Labyrinth is the kind of movie that can dazzle your senses with remarkable sets and visual effects while never forgetting to incorporate emotion into the proceedings to ground the story in moments like the one where a mournful Ofelia speaks to her younger brother whose currently inside their mother's stomach. All of this concludes with an ending I was nowhere near prepared for emotionally, a melancholy final scene that wraps up the plot in both beauty and tragedy. As I said, I was already a major Guillermo Del Toro fanboy even before watching Pan's Labyrinth, but watching this masterpiece of his for the first time reminded me of the very elements that make both him as a filmmaker and fantasy as a genre, such spellbinding entities.

Posted by Douglas Laman (NerdInTheBasement) at 10:32 AM