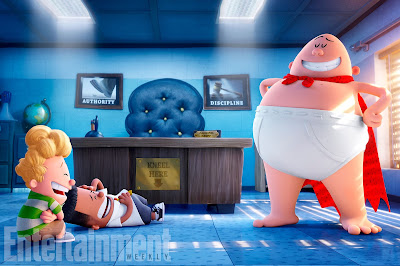 I was a huge reader when I was a kid but few books left as great of an impression on me as Dav Pilkey's Captain Underpants books. I read all of the books in that series too many times to count, their gross-out humor making youngsters like myself feel like we were getting away with something inappropriate whilst actually doing some reading. Lord knows I haven't read one of those books in eons (they're still going right? I remember the last one I read as a kid ended on a major cliffhanger that I think only got resolved a few years back), but it's no shocker to me that the books are still relevant enough with today's youngsters to warrant a theatrical movie, Captain Underpants: The First Epic Movie.


This motion picture is being handled by DreamWorks Animation and director David Soren (the filmmaker behind Turbo), while it contains a cast headlined by Kevin Hart, Thomas Middleditch and Ed Helms. They've put out the first trailer for the movie which you can watch below:
So, it looks alright, faithful to the source material certainly while generating some concerns from yours truly! It's a super duper fast-paced trailer, which makes it kind of whirlwind (not entirely in a good way) to watch. That being said, I actually love how the animation style is not only so different from past DreamWorks Animation (which has a problem with many of their CGI human characters looking too similar to each other) but is clearly evoking Dav Pilkey's illustrations from the original book. Nice touch there! Always nice to see American animation (that was technically animated in Canada in order to keep the budget down) trying some new visual styles.

On the other hand, wow, I'm not sure if I'm done with the distinctly adult voices of Kevin Hart and Thomas Middleditch voicing clearly adolescent characters. Neither of 'em do poor vocal work here, they just don't seem to mesh well with their obviously younger characters. We'll wait and see how that works in the movie itself I suppose, which I hope is good enough to be a cornerstone of today's youngsters childhood just like how the original Captain Underpants books were such a formative part of my younger years. This trailer, while not knocking it out of the park, certainly shows enough promise to make me think that could be a possibility.

You can TRA-LA-LA (boy was it cool to hear that phrase in a movie trailer, not even gonna lie) your way to the movie theater to see Captain Underpants: The First Epic Movie on June 2nd, opening against Wonder Woman. This will make it the rare scenario where, between a male superhero and a female superhero, the male superhero is the one wearing less clothes!
Posted by Douglas Laman (NerdInTheBasement) at 9:07 AM