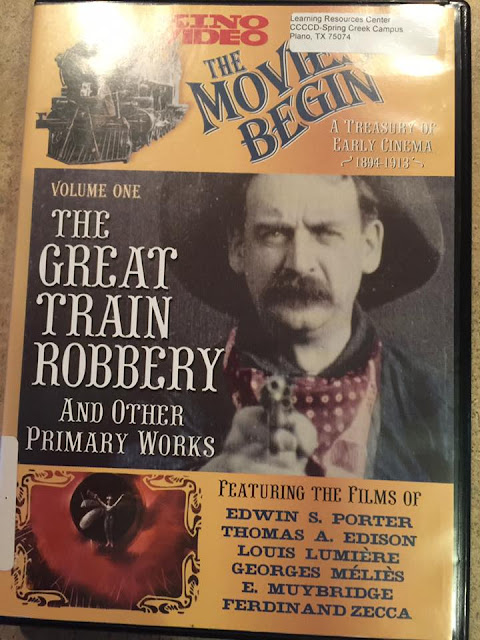 Reviewing this Kino Lorber DVD collection of some of the earliest pieces of cinema was a total accident, I'll freely admit. While browsing the shelves at my college's library, I stumbled upon The Movies Begin: A Treasury Of Old Cinema | 1894-1913, without having either heard of this The Movies Begin series of DVD's, let alone this specific entry in the franchise. Upon discovering it, of course, I couldn't pass it up, especially since I had seen none of the numerous incredibly important shorts it contained within. It really is true how sometimes truly awesome experiences emerge from spontaneity.

Within this 72 minute long collection, you get a large number of short films from a myriad of filmmakers who helped pioneer the craft of filmmaking in ways that are still being felt today. The disc's assortments of early cinematic works begins with various short films from Eadweard Muybridge, a man so strongly associated with the very origin of movies that he's the sole figure that pops up when you Google the phrase "Who invented movies?". His works are simple in nature, usually lasting scant seconds and comprising of basic human movement of women and children. That's to be expected given how Muybridge was working in completely uncharted artistic terrain, he and everyone else on the planet had no clue what the technology he was working with was fully capable of.

From there, we get to see the short films of Thomas Edison, who makes slightly longer short films that chronicle similarly mundane.actions as one can see the art form of filmmaking gradually expanding its scope. It isn't long before we get to a short film from the turn of the century that completely redefined what movies were capable of, taking the entire technique to new levels of storytelling prowess. I am, of course, talking about the 1902 George Melies motion picture A Trip To The Moon which features an elongated narrative, special effects and elaborate costumes, a sharp contrast to the more day-to-day activities primarily depicted in the short films seen earlier on the disc.

What struck me as interesting about this short film is how, despite a radically different visual style compared to modern day cinema, it does reflect certain types of storytelling that still permeate cinema in a major way. Man has always been enchanted by the stars and the cosmos, a realm he could not travel to, so it's no wonder that, once film came along, it was a domain that filmmakers would travel to, just as countless other artists had done in their own creative mediums. The sprawling nature of Outer Space is still seen as the perfect place to set a sweeping tale of cosmic adventure, as seen in the likes of Gravity and The Martian, and all the way back in 1902, George Melies realized the storytelling possibilities offered up by this unique location in A Trip To The Moon.

Offering up spectacle that could only be properly realized on a massive screen is a trend that can be seen in this piece of early cinematic science-fiction and continues through the other elongated narrative short film found on the disc, The Great Train Robbery. Released a single year after A Trip To The Moon in 1903, this western from director Edwin S. Porter also inhabits a genre Hollywood would find themselves frequently returning to in the more than a centuries worth of cinema yet to be created....the western! Here, a train robbery from a group of scoundrels creates quite the ruckus, resulting in shoot-outs and suspense galore.

Here, you can also see the fabric of general audience-friendly cinema being woven. Exciting spectacle, plenty of action and a comforting ending where the foes get their just desserts, these are the basic storytelling tenants that would most other large-scale audience-friendly fare would be built upon in the next century. Of course, these story concepts are so general and nebulous, there's plenty of creative freedom in there to work with and even frequently subvert these ideas. After that western, a further selection of short films plays, concluding with the 1907 short The Golden Beetle, a feature hailing from France that actually utilizes color to tells it mystical tale. It cannot be stressed enough what a fascinating experience it is to watch this disc and go from the ancient beginnings of this medium, with Eadweard Muybridge's groundbreaking work and then concluding with this colorized short film further paving bold new paths for future cinematic artistry. To watch this disc is to just an entire storytelling medium blossom and bloom before your very eyes.
Posted by Douglas Laman (NerdInTheBasement) at 11:18 AM