My Mixed Thoughts On The Justice League Trailer 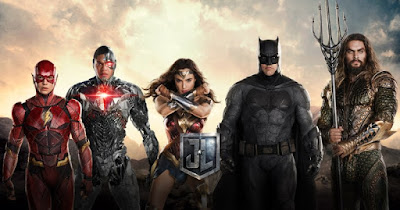 No need for a preamble here folks. My negative feelings towards Batman v. Superman are well-known at this point, we all know a Justice League movie is headed our way, let's just dig into the first trailer proper.

Like, there's some good elements in there, most notably Jason Momoa being his charming self as Aquaman, it is legitimately cool to see long-standing elements of DC Comics like The Flash and Aquaman on the big screen finally and it is cool that Aquaman is being treated like a notable bad-ass instead of just a punchline! They even say his name without using it as a joke! Cool! But I'm still very dubious about this one, honestly. Zack Snyder as a filmmaker revels in being as macho bro-tastic as possible while putting on a facade of intellectualism that just doesn't work and only further reveals the shallow nature of duds like 300, Sucker Punch, Man Of Steel and his all-time disaster Batman v. Superman.

The trailer for Justice League seems to indicate this movie will be putting aside the protentous atmosphere of his last two DC Comics movies in favor of trying to mimic the Marvel movies, right down to the usage of a mid-20th century rock song (though, true to the style of Snyder's filmography, something universally beloved from the 20th century like The Beatles must be given a gritty coating to come off as "edgy" and "cool") and the quippy dialogue, which feels awkwardly edited here. That awkward editing stuck out to me because Ezra Miller's one-liners were actually fine in the Comic-Con trailer eight-ish months ago, so I'll be hopeful and chalk that up to poor editing.

Otherwise, honestly, not much here is getting me excited. Too much of the action is taking place in darkly lit environments (the best action bit is Wonder Woman taking out some baddies in broad daylight) with an overload of CGI that makes it look like the demo reel from a GameCube game. Plus, the honest to God overload of characters in this trailer, especially in the second half where Hera, Lois Lane and Commissioner Gordon all show up (and Billy Crudup as Barry's incarcerated father, who I did not know was in this movie until the trailer showed him) makes me worried we're in for another overstuffed cataclysm like Batman v. Superman, especially since we haven't even seen the likes of Lex Luthor, Superman (how the hell are we doing a Justice League movie trailer with ZERO mentions of Superman????) and even our main bad guy, Steppenwolf.

I want this movie to be good. I love DC Comics, I love superhero movies and I've liked past Zack Snyder movies like Watchmen and Legend Of The Guardians. Please, just let this be a funky trailer and not an indication of what's to come.
Posted by Douglas Laman (NerdInTheBasement) at 10:33 AM